The term “tribunal” is used extensively in administrative law and applies only to adjudicatory bodies outside of the scope of the traditional judicial system. In India the judiciary, legally, is granted authority over the courts aimed at safeguarding individual rights and ensuring justice. Such jurisdictions are thus delegated to the administrative authorities to develop an effective judicial system with less complications and to construct administrative courts or administrative adjudicatory bodies with almost judicial characteristics. History of Tribunalisation The notion of tribunalisation originated in India with the setting up before the independence of the country of the Income Tax Appellate Tribunal.

Don't use plagiarized sources. Get your custom essay on
“ Tribunal Definition and Meaning ”
Get custom paper
NEW! smart matching with writer

Following independence, versatility and speed were required to settle administrative disputes. The primary purpose of the court procedure was to provide citizens with comprehensive and swift justice.

Since the Indian Constitution was drafted, the Constitution granted many rights for the benefit of the individuals. Citizens have the rights to simple and specialized courts, which are not feasible due to overloads of cases and appeals by the predominant judicial system.

The need for the establishment of administrative tribunals could not be ignored thus. techniques in the courts etc.

Section XIV-A of the 42nd amendment to the Constitution provided for in Article 323A and 323B the creation of administrative and other courts of justice. Under these Constitution provisions, courts should be structured and formed so that the dignity of the justice system as laid down in the Constitution, which form the fundamental constitutional framework, is not violated. The adoption of Articles 323A and 323B was done with the primary objective of removing the jurisdiction of the High Courts pursuant to Articles 226 and 227, with the exception of the Supreme Court’s jurisdiction pursuant to Article 136, and of providing an efficient alternative institutional structure or authority for particular judicial cases.

To reduce the pendulum and reduce the burden of litigation, the aim was to create tribunals outside the competence of the higher courts. The tribunals are then structured under the jurisdiction of the Supreme Court of India as part of the civil and criminal court system. From a practical standpoint, an administrative court is not an exclusively legal body, nor an absolute administrative body but somewhere between them. That is why they often consider an administrative tribunal a ’quasi-judicial’ entity.

Strict laws of proof and procedure do not obey them. Management tribunals shall be separate and not subject to any bureaucratic intervention in the exercise of legal or quasi-judgmental duties. In procedural matters, the administrative court has the power of the court to summon witnesses, to administer the oaths and to compel the production of documents, etc. These courts are bound to abide by the principle of natural justice. The administrative tribunals must have a fair, transparent and impartial act. The privilege certiorari writs and prohibition are valid against administrative tribunal decisions.

Administrative tribunals in the field of service Administrative Tribunals in the field of service [Article 323A] Article 323A provides that the administrative tribunals of the Central Government and State Government may be created by law passed by Parliament for the award of disputes and complaints relating to the recruitment and terms and conditions of service of government officials. This includes the employees of any state or other authority within the jurisdiction of India or under the control of the Government of India or of a government-owned or managed company. These tribunals must be set up separately for each State or for two or more States at the center and state level. The legislation shall include the provisions relating to the jurisdiction, power and authority to be exercised by the courts; the procedure to be followed by the courts; the exclusion of the jurisdiction of all other courts except the Supreme Court of India.

Tribunals for certain matters [Article 323B] Article 323B empowers Parliament and the State Legislature to set up tribunals for the adjudication of any dispute or allegation relating to matters laid down in Article 323B. Many of the issues referred to in Article (2) include taxes, valuation, collection and compliance, currency and export, industrial and labor disputes, food production, procurement, supply and distribution, rent and leasing and regulation and the question of control and occupancy, etc. Such a law must specify the authority and powers of such tribunals, and determine the procedure to be followed.

In the landmark suit of L. Chandra Kumar v. Union of India, The court drew different conclusions about the court’s competency under Articles 323A and 323B in Chandra Kumar c. Union of India [1]. The Court ruled that the tribunals formed pursuant to Article 323a and Article 323B were to continue to be the courts of first instance in their respective regions, on account of the absence of the competence of the High Court and the Supreme Court pursuant to Articles 226/027 and 32. The litigants cannot petition the high court’s directly if the authority of the concerned tribunal is ignored. No appeal would come before the Supreme Court under Article 136 for a decision of the tribunal, but then the aggravated party would be entitled under Article 226 and 227 to transfer the Court and, after the judgment of the High Court Division’s Bench, the party may send an application to the Apex Court pursuant to Article 136.

Tribunal Definition and Meaning. (2020, May 14). Retrieved from https://studymoose.com/tribunal-definition-and-meaning-essay 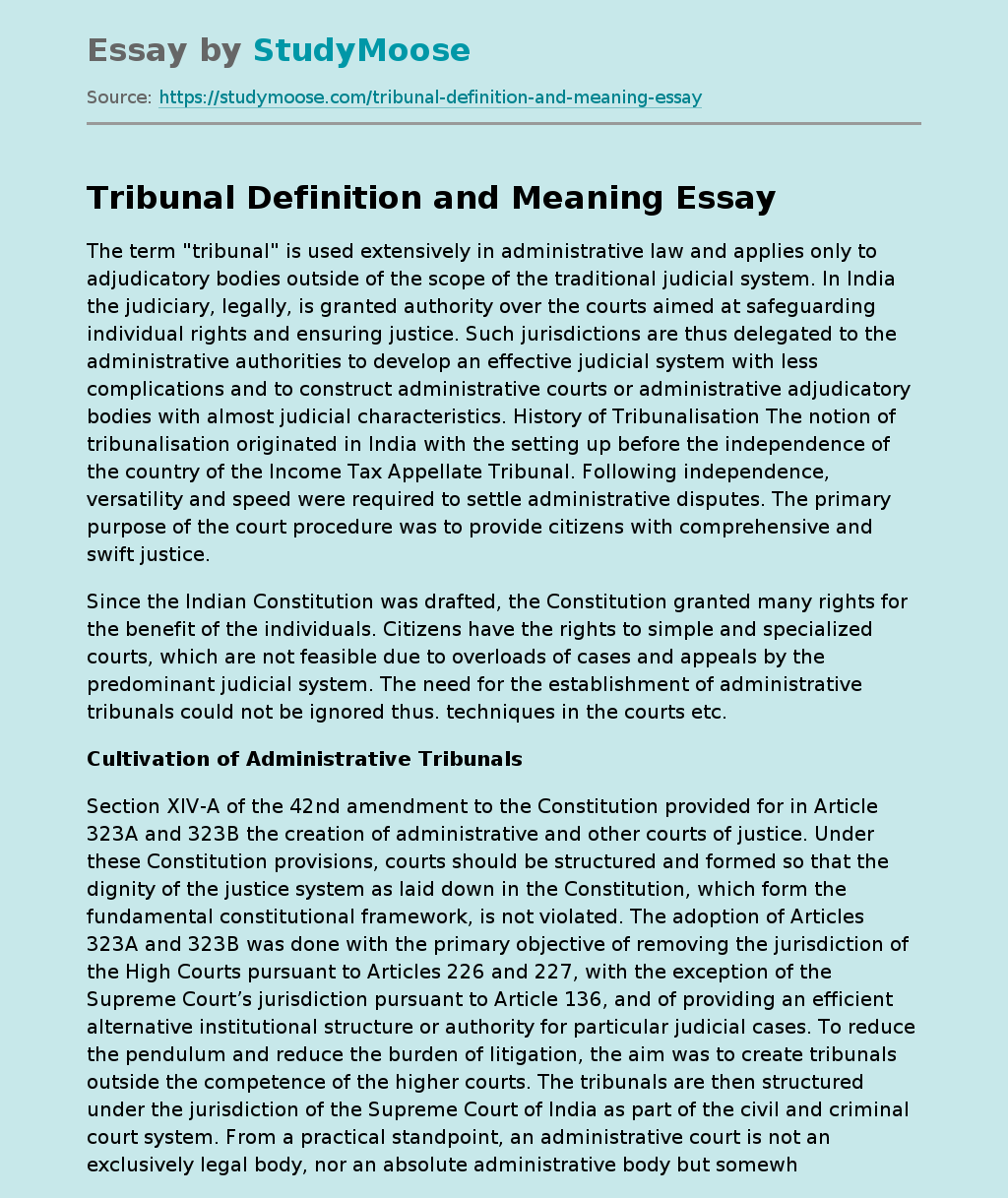