Introduction
In global markets, modern corporates have significant power to exercise a positive influence in the countries, where they buy goods and services from global suppliers in bulk. Recognising this influence is the first step to understand the contribution of the modern corporates in developing countries’ economies and in turn their self-benefit. As being giant firms at one end of the buying chain with the cost reduction advantage, they shouldn’t be reluctant of getting involved and operate with the suppliers to improve working conditions and comply with the ethical trading regulations.

Don't use plagiarized sources. Get your custom essay on
“ Trend of Corporate Social Responsibility (Csr) in Uk. ”
Get custom paper
NEW! smart matching with writer

The concept of CSR is well explained by Gordan Brown, Chancellor of Exchequer, that in this era Corporate Social Responsibility goes far beyond the old trend of the past (donating money to a good cause at the end of the year) And is now an all year round responsibility the companies accept for the environment around them.

To provide best working practices, the engagement in local communities and for their recognition that brand name does not only depend on quality, price and uniqueness but how they interact with companies’ workforce, community and the environment.

A quote from Idar Kreutzer (CEO Storebrand, 2005) saying that Companies understand economic value but are now recognizing how they are gaining competitive advantage by interacting with the society and by accepting responsibility of the environment around them. “We are committed to creating economic value, but we are not indifferent to how we do it. … Progressive businesses are gaining competitive advantage by responding to societal signals. … We prosper by helping society to prosper.” Research Question

Whether the concept of Corporate Social Responsibility is increasingly being followed by the UK Businesses in recent years? Methodology
In order to investigate the problem, I have conducted research using secondary research method. Therefore, it results in the qualitative data that has been analyzed and recommendations are indicated with the conclusion at the end. As some of the main sources I have used:

The internet
* The official page of Primark.
* Corporate Social Responsibility, an Implementation Guide for Business. (Paul Hohnen, Author and Jason Potts, Editor) Articles
* Corporate social responsibility (Mallen Baker)
Case Study/Analysis
What encourages businesses to do so?
Attitude to business and its relationship with the society is being changed and shaped by outside events. This Attitude can demonstrate social problems that substantially change the environment within which companies do business, which are partially or wholly caused by business activities. Corporate Experts have a vision for how sustainable business should operate and develop new ideas, or increase expertise on past experience, and implement these within the business. This defines how businesses focus their attention when the spotlight isn’t particularly on them. Do they define CSR as about being environmental management or core purpose of the businesses to get under the spot light? (M Baker 2012) Increasing trend in CSR:

The study finds that there is a general trend of increasing CSR since many investors view CSR as a means of erasing a corporation’s reputational and regulation risk and as a performance Factor enhancing stakeholder relations, brand image, customer loyalty, and employee recruitment and motivation. In 2007, Socially Responsible Investment (SRI) represented one dollar out of every nine under professional management in the U.S., and a total of $530 billion Dollars of investment in Canada. The trend is similar in Europe, and the Socially Responsible Investment (SRI) movement does not seem to be declining in the face of market turmoil. In fact, recent market conditions may Offer support for such investment practices. Similarly Environmental Finance has quoted that Nathalie Monnoyeur, head of SRI development for IDEAM, confirmed that the current crisis was pushing asset managers to look beyond traditional financial analysis and to consider environmental, social and governance risks. An IBM/Economist Intelligence Unit survey of global chief executives from 1,130 organizations across 40 Countries confirmed the growing number of socially-concerned customers who are interested in buying ethically and environmentally produced products and who may be prepared to pay more for them. The survey also found that chief executives intend to increase spending over the next three years by an average of 25% in order to satisfy customers concerned with Social issues. The study also analyzed two individual cases in detail. Primark operates its own Corporate Social Responsibility (CSR) policies within Associated British Foods. They aim to make their employees, suppliers and local and wider community’s part of their success by working with them in every way they can. This means that the company takes its environmental responsibilities seriously.

They are also members of the Ethical Trading Initiative which is a testament of their determination to succeed on their own merit and not at the expense of others. Primark supports many local charitable organizations, community projects, families and individuals across the UK and Ireland throughout the year. They also try to support charities including those involving children, education, healthcare, the elderly and people with disabilities. Primark also participates in a scheme in Great Britain and Northern Ireland operated by Valpak which ensures the company’s full compliance with the obligations of the UK Waste Management Packaging Regulations to recover packaging waste. An Article by The Telegraph UK (M Strydom, et’ al D N, D B. 2013) States that In a statement released on their website, a Primark spokesman said: The Company is shocked and deeply saddened by this incident at Rana Plaza, and expresses its condolences to all of those involved to hear about the deaths of up to 200 people following the collapse of an eight-story building in Bangladesh used by one of its suppliers. The Rana Plaza in Savar, 20 miles outside the Bangladeshi capital Dhaka, which collapsed on Wednesday the 24th of April 2013, supplied retailers in Europe and North America. New Wave Style, the largest of the factories, lists retailers such as Primark, Matalan, Wallmart and Bonmarche among its customers. A statement from Primark said, we have partnered with a local NGO [non-governmental organization] to address the immediate needs of victims, including the provision of emergency food aid to families and pay compensation to the victims of this disaster who worked for its supplier and will include the provision of long-term aid for children who have lost parents, financial aid for those injured and payments to the families who have lost lives.

They also said their team in Bangladesh had been working to put in place immediate and long-term help for victims of this disaster and it would review the support to ensure it kept up with need. This initiative began in Bangladesh immediately to the extent of the disaster became clear. Primark Responded to its responsibilities sensibly and also urged other retailers who had suppliers in the building to come forward and offer support to those affected. Retailers like Walmart also said that it banned the Bangladeshi garment factory (Mars Apparels) from producing goods for the retail giant. But over the last year, Mars has repeatedly shipped tons of sports bras to Walmart, according to U.S. customs records and Mars owners. The most recent shipment was in late May, almost two years after Walmart claims it stopped doing business with the Bangladeshi firm.

Walmart spokesman Kevin Gardner said the Mars shipments were allowed because of confusion over whether Walmart’s standards applied because Mars didn’t produce garments with a Walmart house brand but instead with a Fruit of the Loom label. Giant Retailers such as Walmart and Primark who have their suppliers in Bangladeshi Factories should make its efforts to ensure decent working conditions in factories located in low-wage countries. International labor groups have been pressing retailers to sign a contract to pay for fire and building safety upgrades to Bangladesh factories. So far, several large retailers including H&M, Inditex and PVH Corp, which includes Tommy Hilfiger and Calvin Klein, have signed onto the agreement. But many of the biggest retailers in the United States, including Walmart and Gap, have not. Instead, they are working on an alternative plan that they say will improve safety faster by 2014. There should be a clause in the health and safety regulations that International Retailers buying goods from suppliers should pay for health and safety conditions and would not be allowed to do so unless they have taken responsibility of it. The tragedy which took place in the garment factory where nearly 1,000 people were injured and it resulted in killing nearly 350 people. It overall resulted in an immense loss of labour and infrastructure. Conclusion

After analyzing the above facts and cases the study concludes that as awareness of corporate social responsibility grows, businesses have come to realize that their supply chain and its management can say a lot about the kind of company they are and the values they hold. After the tragic collapse of the Bangladeshi factory building(The Rana Plaza) which caused the death of about 1,200 low-paid workers, Retailers including Primark, H&M, Marks & Spencer and Inditex (which owns Zara) were saddened to hear the incident which took place. Consumers in the west reacted at the thought of well-known high street brands trading with suppliers that had allegedly shown such poor regard for the health and safety of their employees. The retailers responded by faking a deal which was not completely true, in fact some of them such as Primark seemed to be quite concerned about their suppliers. They have also recently agreed to carry out an inspection of all the Bangladeshi garment factories that supply them within the next nine months.

To prevent ethical issues arising within a company’s global supply chain and potentially causing lasting damage to their brand, some basic principles should be followed. Ethical consumerism is on the rise and buying decisions within every industry sector are increasingly influenced by ethical considerations. Make the most of this by ensuring that customers and their markets know what are doing and how business is actively involved in supporting global development initiatives. With the growing of human activities, businesses have now started to respond to Corporate Social Responsibility. This is also because Consumers are now more aware and concerned towards the ethical decisions that businesses make. It is important that they must include these responsibilities in the decisions they make and the values they hold. Businesses are now starting to realize the importance of their contribution towards the social responsibility and towards the environment as people are now aware of social needs. Despites the laws and regulations, people are now providing more facilities for the environment and proving to be more ethical. Therefore it can be concluded that the overall trend of Corporate Social Responsibility( CSR) Is increasing. References 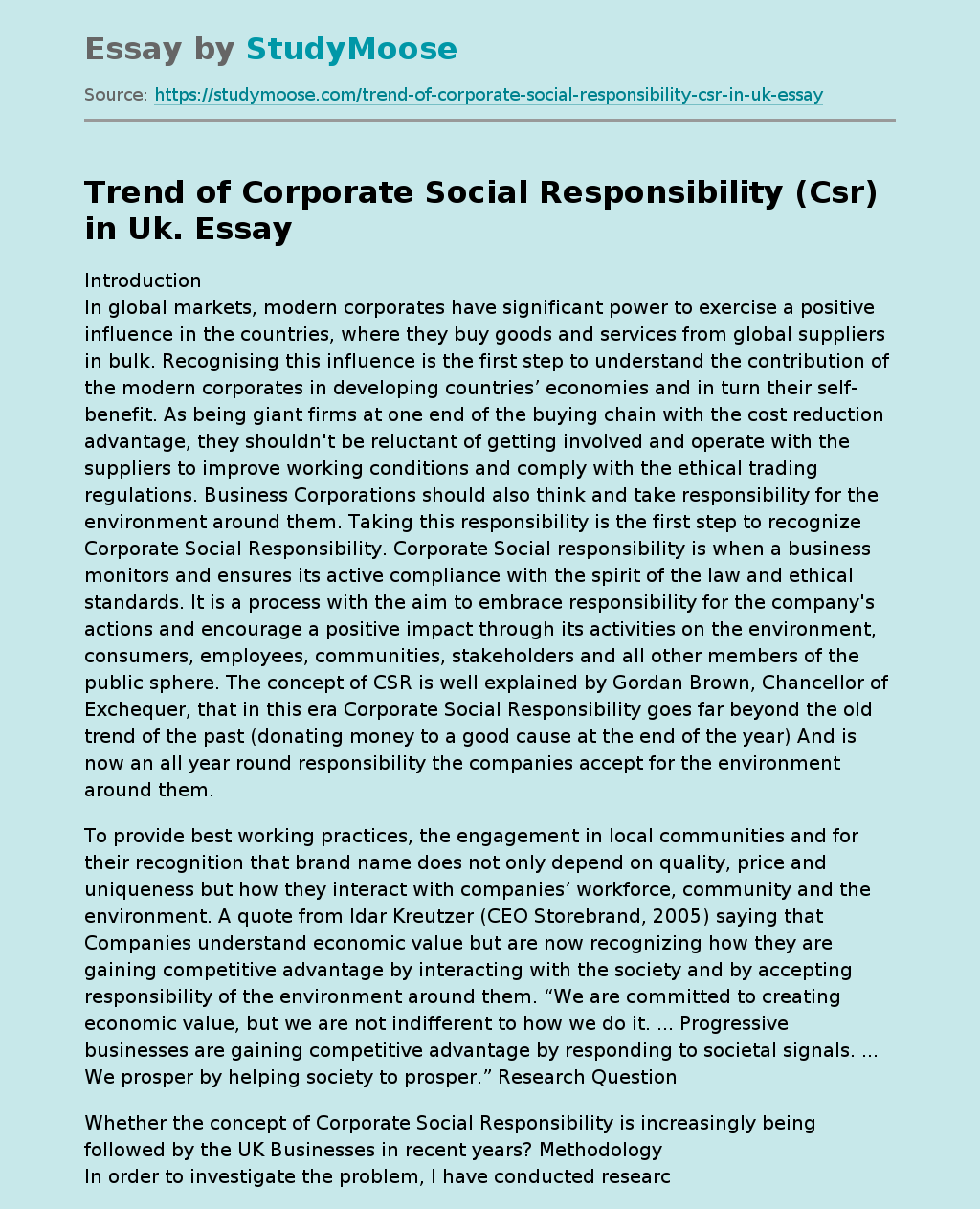