Which terms of the peace settlement of 1919 directly affected France?

France gained territory such as Alsace Lorraine and the Saarland (which were important industrial areas) Also, german colonies become mandates ruled by the League of Nations and France would be able to make use of them. The league of nations menat that France’s safety would concern other countries as it woul act as an international police force. France’s safety was assured by the terms of the treaty as germany would be economically weak due to 6600 million pounds being imposed as reparations.

Don't use plagiarized sources. Get your custom essay on
“ Treaty of Versailles Igcse Notes ”
Get custom paper
NEW! smart matching with writer

Furthermore its army had been greatly reduced and a natural border(The demilitarised Rhineland) had been imposed between France and Germany.

What military restrictions were placed on Germany by the treaty of Versailles?

Germany had to ban conscription(soldiers had to be volunteers) and could only have 100,000soldiers inits army. It could only have six battleships. No armed vehicles nor aircraft nor submarines. The Rhineland became a demilitarised zone, no German soldiers were allowed into the area.

This was important because the Rhineland was the border area between france and germany.

In what ways did the treaty weaken the german economy?

Germany was to accept the full blame of starting the war and therefore had to pay 6600 million pounds in reparations. Furthermore, the Saar and Upper Silesia wre lost, these were important industrial areas. Germany lost a large section of their territory and found themselves with no incomes and having to pay a great amount of money. The goverment went bankrupt and this lead to hyperinflation.

The reduction in armed forces and the banning of conscription increased the number of unemployment. Unemployment also increased becaused factories when bankrupt and had to fire their workers. The ruins of the war had caused a widespread of poverty and hunger.

Describe what Clemenceau and Lloyd george each wanted to achieve in the peace settlement of 1919-1920.

Clemenceau wanted revenge and punishment against Germany. It wanted to make it pay huge reparations and to disband its army to make Germany weak. This would mean that it would be never be strong enough to invade France again. France had suffered the most in WW1 and its land and industry had been greatly damaged. Clemenceau wanted Alsace-Lorraine back and and independant Rhineland in order to guarantee France’s safety and rebuild its industry. On the other hand, Lloyd George wanted Germany to be punished but not to harshly as he agreed with Wilson that a exceedingly hard Treaty would lead to a future revenge from germany and the start of another war. Lloyd George wanted Germany to loose its navy and its colonies because he thought they were a threat to the british empire. He didn’t want to weaken germany’s economy too much because he wanted Britain to continue to trade with it, as it had done before the war. Both leaders were greatly pressured by public opinion at home in 1919, making them promise to create a Harsh treaty. b)Why did the aims of the Big Three differ at Versailles?

Clemenceau resented Wilson’s more generous attitude towards the treaty as the USA had not suffered as much as France. No fighting had taken place on USA territory. Furthermore, they disagreed over what to do with Germany’s Rhineland and coalfields in the Saar. Wilson’s 14 points seemed too idealistic to the other two leaders and they only gave in to the idea of self-determination in east Europe once Wilson had agreed on the issues concerning the Rhineland and the Saar. Clemenceau felt that Britain was happy to treat Germany fairly in Europe as France was its neighbour and was more under threat. However, Britain was less happy to allow Germany to keep its navy and colonies which was more of a treat to Britain. Lloyed George didn’t want to make the treaty too harsh as he wanted to keep germany as a trading partner and to prevent a future war. However, he had promised the British people that he would make the treaty as harsh as possible. Lloyd George clashed with two points of Wilson’s 14 points. He thought that allowing ‘all nations access to seas’ was a threat to Britain and that self-determination threatened their empire and oversea colonies.

Why did the treaty of Versailles cause problems for Germany in the years up to 1923?

Germany hated the war guilt clause. They felt that the blame of the war should be shared, and that Germany should have been invited to the Paris Peace conference to negotiate peace. Accepting the blame for starting the war meant the Germany was to pay 6600 million pounds in reparations. The German economy had already been greatly damaged by the war and the reparations would cripple them completely. Furthermore, the reduction of the army and the removal of important industrial areas(such as the Saar and Upper Silesia and colonies) lead to huge unemployment.

Many Germans blamed the Weimar republic for accepting the harsh terms of the treaty. There were extremists attempts to overthrow the Weimar republic(Spartacus League and the Freikorps). This revolution, called the ‘Kapp Putsch’ was defeated by a general strike from the Berlin workers, which paralysed power and transport. In 1922 Germany fell behind on its reparation payments, so in 1923, France and Belgium soldiers entered the Ruhr region and took raw materials and goods. The Ruhr crisis meant that Germany had no goods to trade and therefore no money. This eventually lead to hyperinflation which further damaged the German economy.

To What extent was the Treaty of Versailles a sensible treaty in the circumstances of the Time?

Many at the time thought it was fair and sensible. A more generous treaty would not have been acceptable to the people of Britain and France who wanted compensation for the loss of lives and damage caused by WW1. The victors wanted a severe treaty which would reduce any possibility of war breaking out again. The agreed armistice terms of 1918 were included in the Treaty: Germany had accepted the principle of reparations, the loss of Alsace-Lorraine(which had previously belonged to France) and the demilitarisation of the Rhineland. It should therefore not have been a surprise when they appeared in the final peace treaty. The Big Three had been under a great deal of pressure at the peace conference to meet the expectations of public opinion at home.

Furthermore, the three leaders thought that Germany would have enforced a harsher treaty if it had won. (As it had done against Russia in 1918-Brest-litovsk). The winning countries had also set up a League of Nations which was to deal with any unresolved problems and act as an international peace-keeping police force. However, the Treaty of Versailles made countries determined to get revenge. This is why Hitler gained plenty of support in Germany when he planned to overthrow the Treaty. Moreover, the treaties concerning Central and eastern Europe failed as the created too many states of minority nationals such as Yugoslavia and Czechoslovakia.

Likewise, Turkey had been treated unfairly in order to satisfy France,Britain and Greece-the treaty of Sèvres only lasted three years. The Big three had proved to have failed with the problems caused by WW1 when war broke out again in 1939 and the Treaty became a long-term cause which Hitler chose to destroy. The treaty had finished ordinary German people rather than those who were responsible. It was wrong to put the sole blame on Germany when other countries such as Britain and France had been equally aggressive during the war. Overall, the Treaty of Versailles did not succeed in keeping peace but had been the best that could be hoped for in 1919, as the leaders of the winning countries did not have any other choice. 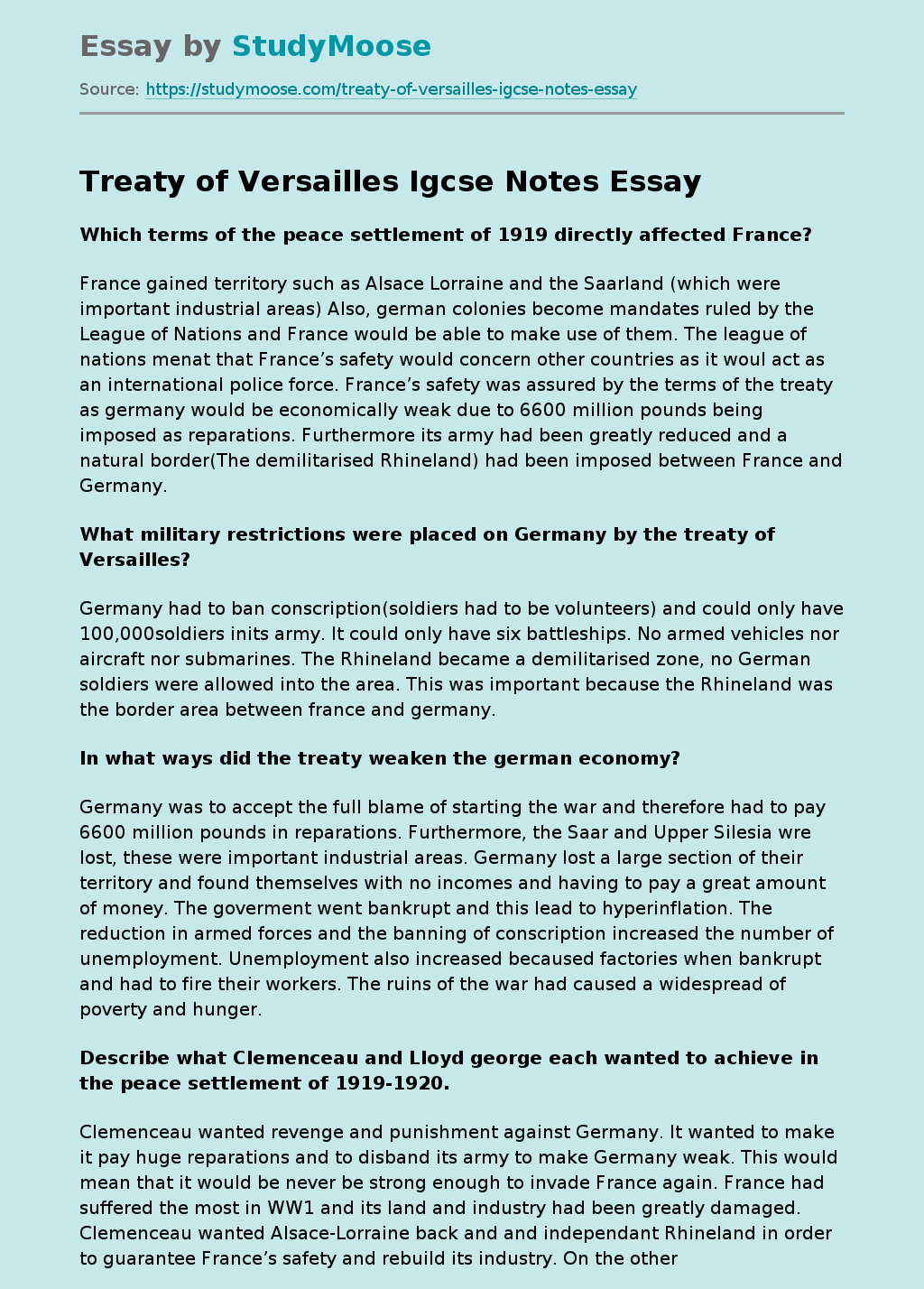