Treaty of Versailles After World War I

The Allies thought that the peace treaties would solve the problems of Europe, they were soon disappointed. The main problem was Germany. The Treaty became to be known as a ‘Diktat’ because Germany was forced to seek peace. It had neither been defeated nor had it surrendered. Many Germans felt humiliated when the Allies presented the Treaty of Versailles to them and threatened to resume the war unless they agreed all the terms without any condition. Many also felt that they had been “stabbed in the back” by a weak civilian government and by revolutionary forces at home.

Don't use plagiarized sources. Get your custom essay on
“ Treaty of Versailles After World War I ”
Get custom paper
NEW! smart matching with writer

The German government also felt cheated by the Allies because they were not allowed to take part in the ‘peace’ negotiations. The German government issued a protest against what it considered to be unfair demands and a “violation of honor” and soon afterwards, withdrew from the proceedings of the Treaty of Versailles. Those who signed it (though effectively they had no choice) became to be known as the “November Criminals”.

Many German citizens felt that they were being punished for the mistakes of the German government in August 1914 as it was the government that had declared war not the people.

According to clause 231 i. e. the war guilt clause, the Allies blamed Germany to start the war. This clause did not physically hurt Germany, but it hurt German pride and dignity and this made them want to overturn the Treaty. This resulted in heavy reparations (? 6,600 million) that Germany was forced to pay. This large sum crippled Germany’s economy and the loss of valuable industrial areas such as the Saar made post- war recovery almost impossible.

In 1922-23, the German economy collapsed after paying excessive war reparations, and then collapsed again after 1929 during the Great Depression this brought an end to reparations. Germany was also reduced to only 100,000 men. It was also forbidden to have any submarines and tanks. This meant that Germany could not start any other war; it also meant that Germany could not defend itself from any foreign attack. Germans felt very weak and vulnerable. They said they were helpless against other countries. The principle of universal disarmament was applied in Germany only.

This aroused anger in the public. The Germans also hated the loss of territory. Germany had to give back French parts (Alsace-Lorraine) taken by Germany in the Franco-Prussian War (1870-1871) which Germany had won and was an embarrassment for France. They felt that Alsace-Lorraine was now their own territory and they were outraged when asked to give it back. Germany also had to give many parts to Poland, a new country made out of Old Russian and Austrian parts and the Polish and Lithuanian people who lived in them.

Poland was a very strong kingdom a few hundred years before but Austria, Prussia and Russia had split it between them. This made the Polish people unhappy, and they were given a country again. This humiliation led to hatred of the Germans towards the Allies. The payments they had to pay were beyond their capacity seeing the fact that they had lost most of their precious resources. They had lost their population and territory. Above all, they had to take the guilt of starting the war. Consequently, the ‘peace’ treaty of Versailles led to the rise of Adolf Hitler and the world was headed towards another war.

Treaty of Versailles After World War I. (2016, Oct 07). Retrieved from http://studymoose.com/treaty-of-versailles-after-world-war-i-essay 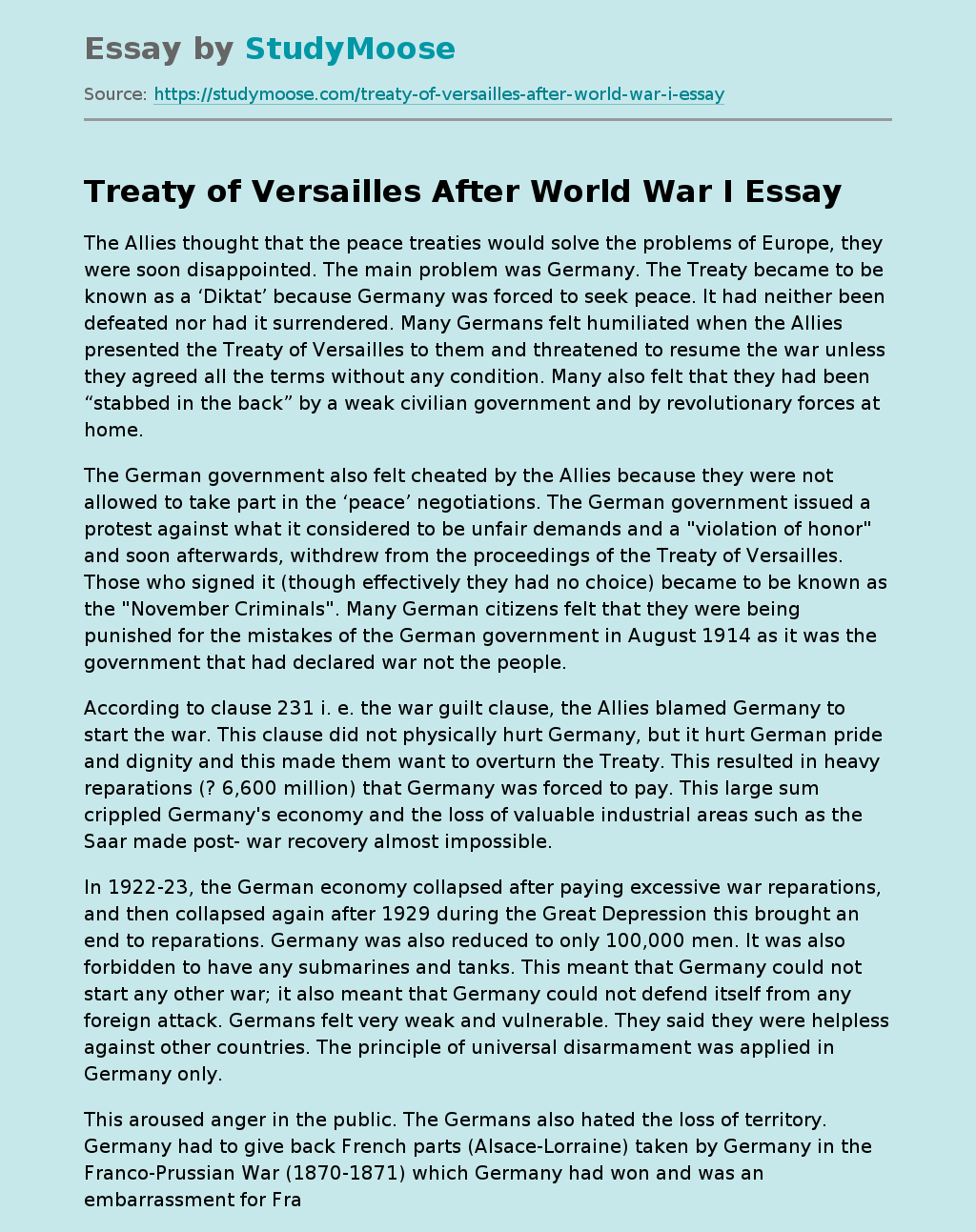