In this essay I will be analysing and concluding whether I believe that the Treaty of Versailles was the main cause of the political and economic instability in Germany between 1919 and 1923. Also I will be looking at other factors that may have caused the political and economic instability. The Treaty of Versailles (signed 28th June 1919) had huge impact on the political instability within Germany between 1919 and 1923. It consisted of 440 Articles setting out the terms for Germany to abide by. The treaty angered the German people as they felt stabbed in the back believing it to be unfair and shameful.

Don't use plagiarized sources. Get your custom essay on
“ Treaty of Versailles essay ”
Get custom paper
NEW! smart matching with writer

The terms involved Germany taking the blame for the First World War and the reduction of their army which both had a political affect within the country. It humiliated the German people as they felt no blame for the war and they were very proud of their army. The anger the people felt left an opening for extremist left wing and right wing parties to gain popularity.

Proficient in: Treaty of Versailles

The treaty caused a large amount of economic problems in Germany due to the harsh reparations term of £6.6 billion which they had to repay for damages caused by the war. The German marks value was decreasing due to Germany reprinting money to keep up with payments which eventually caused hyperinflation. As the rate of money was decreasing the price for goods went up.

Wages also went up but not enough to buy food, clothes etc. People with savings were hugely affected as those two became worthless.

The population was starving and had to queue for food. Those who made enough to buy food could only afford no more than a loaf or two of bread. People even burnt their money just to keep warm. In 1223 the French Prime Minister decided to take action as Germany had defaulted on repayments. As the Germany army was limited there was nothing they could do, therefore The French occupied the Ruhr, one of Germany’s biggest industrial areas. The French believed the workers would carry on in order for them to gain their money. However the workers went on strike, meaning no money was being produced from what was being made at the Ruhr and even more unemployed in Germany. Other factors can be blamed for the political instability German faced between these years. The abdication of Kaiser Wilhelm was a huge political change in Germany.

Leaving Germany without its figure head meant a new government needed to be formed. The Weimar Republic was the new democratic government which signed the Weimar Constitution on the 11th of August 1919 in Weimar as Berlin was too dangerous due to revolutions. Friedrich Ebert was elected president on this date. Without the Kaiser the German people believed they were left without a strong leader. Although many welcomed the change to democracy, others believed that a military leadership was the only way to rebuild Germany after the war. Some even wanted communism, where everyone is equal with the control of a strong state. This created chaos and confusion among the whole German population. The country was not use to having a say in how the government is run and decisions that were being made which would be strange. The Weimar constitution itself caused some political problems between 1919 and 1923. The first huge problem with the constitution was Proportional representation. This meant that when Germans voted for a political party each party was then allocated seats in the Reichstag reflecting the number of people who had voted for it. It sounds fair but in fact it resulted in dozens of small parties, with no party strong enough to get a majority vote.

Consequently there was no government to pass laws in the Reichstag. Weimar also caused revolutions within Germany, for example the Kapp Putsch in March of 1920. This right wing nationalist group, led by Wolfgang Kapp aimed to overthrow the government. The group consisted of members of the paramilitary Freikorps and had the support of many army officers. President Ebert wanted to disband the Freikorps, due to this the Freikorps joined forces with Wolfgang Kapp as they both wanted the same thing. Ebert was forced to leave Berlin which undermined his status and showed the Government to be weak. The only comeback Ebert had was to turn to the people and called for a General Strike. This was successful in making the Kapp putsch unsuccessful. However, despite the short period of time that Kapp had control of Berlin, the uprising made it clear that there was not universal support for the Weimar Government. Other factors can be used to explain the economical instabilities which Germany faced. For example, war costs had a large impact on the German economy.

Money had to be spent on making weapons, supplying the army with what they needed, rations etc. This caused life in Germany to be very hard for civilians, food and other essentials were limited. To conclude I believe that the Treaty of Versailles was only to blame for the economic instabilities Germany faced between the years 1919 to 1923. This is because the large reparations term of treaty which Germany had to pay. Reparations ruined the German economy and having 92 years with £59million to pay back it shows how low their economy must have been. However the political instabilities between 1919 and 1923 that were caused I blame on the Weimar Constitution. This is due to the revolutions, extreme party votes that were gained due to unhappy people and chaos that were caused by the new government. 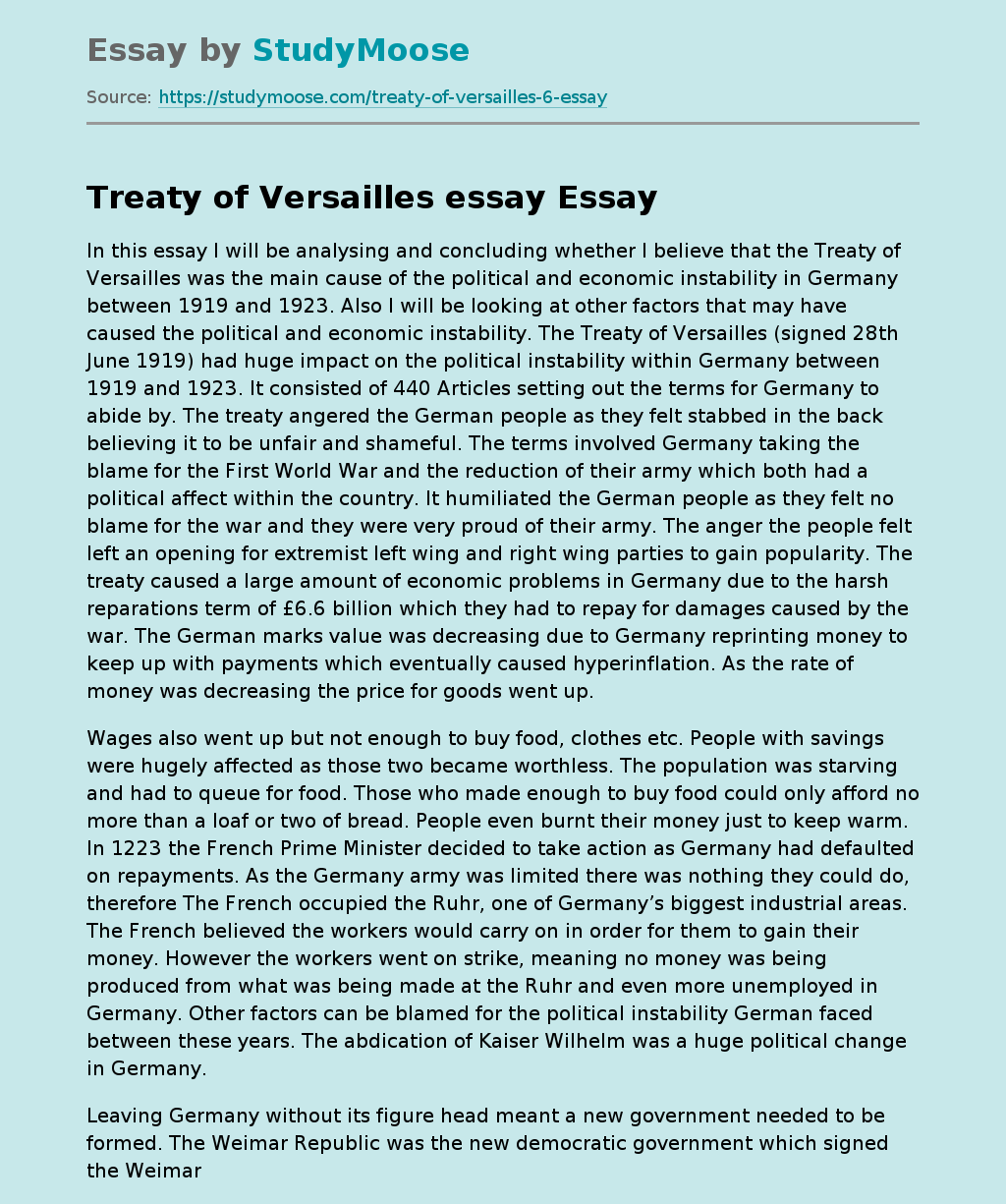