According to the American Psychiatric Association, there is a fifteen percent prevalence of mental disorders in the United States. Bipolar disorder, also known as manic-depressive, is a mental disorder. Symptoms of bipolar disorder include extreme highs and extreme lows with periods of normal mood in between. Manic symptoms are being extremely active, talkative, distractible, unlimited hopes with no follow through, aggression, hostility, and violence.

Don't use plagiarized sources. Get your custom essay on
“ Treatment of Bipolar Disorder ”
Get custom paper
NEW! smart matching with writer

Suicide is the 11th leading cause of death in the United States. Roughly, 29,000 people commit suicide each year. Bipolar Disorder can create marital and occupational problems as well as financial dismay. Mood disorders are thought to be caused by nature and nurture. Biological factors that may lead to a bipolar episode are chemical imbalances in the brain, hormonal imbalances, and inherited traits.

Physiological factors that may lead to a bipolar episode include maladaptive cognitive distortions. The text defines this as “an illogical and maladaptive response to early negative life events that leads to feelings of incompetence and worthlessness that are reactivated whenever a new situation arises that resembles the original events.

” (Morris and Maisto,2005) Studies suggest that women are two to three times more likely to have a mood disorder than men. Being diagnosed with bipolar disorder is a lifelong and reoccurring illness. There are different types of bipolar disorder.

The symptoms of bipolar I are severe mood swings from manic to depressive that lasts at least seven days.

Bipolar II occurs when mood swings are less manic, or hypomania, and shift back to depressive. When one’s symptoms are not determined to be either of these the disorder is called bipolar disorder not otherwise specified. These symptoms are not as fierce as the I and II characterization. Cyclothymiacs is a mild form of bipolar disorder. These milder forms of symptoms continue to shift over the course of two or more years. When a person has four or more episodes a year they are referred to as a rapid cycler.

Although the onset of this disorder usually occurs in the twenties and thirties some children are also diagnosed. Children are more likely to be diagnosed early if they have two parents with the disorder. The child’s odds increase up to seventy-five percent in some cases. Many bipolar patients self medicate with drugs and alcohol. This action can trigger or prolong the symptoms. Bipolar disorder patients are at a higher risk for many diseases. These diseases include heart disease, diabetes, obesity, migraines, and thyroid disease. When one suspects they have bipolar disorder, a doctor needs to be consulted.

The doctor will perform a physical examination, interview the patient, and order testing. There is no test for bipolar disorder but these tests will rule out other ailments. After reviewing all tests and lab reports a mental health evaluation will be preformed. Family history will be taken as well as interviewing the family of said patient. Bipolar patients tend to seek help in the depressive state rather than the manic state. This disorder is treated with medications and psychotherapies. Over the course of treatment, several medicines may be tested. The first choice of treatment is a mood stabilizer.

The FDA approved lithium in the 70’s for treatment of mania. In 1995, the FDA in treating mania approved depakote. Recently, the FDA in treating bipolar disorder approved an anticonvulsive medication. Anti convulsive medicines are lamictal, neurontin, topomax, and trileptal. Atypical antipsychotic, or second generation, medicines are also used occasionally. These medicines are zyprexa, abilify, seroquel, risperdal, and geodon. These medications relieve sudden and severe mania symptoms. Anti depressants are used in treating the depressive side of bipolar disorder.

Prozac, paxil, Zoloft, and wellbutrin are all examples of anti depressants. Mild side effects to medicines include headache, rashes, and heartburn. These side effects usually go away as one get used to taking the medicine. Serious side effects can occur, as with any medicine, such as tardive dyskinesia. This is uncontrollable muscle movement, usually around the mouth, that needs to be discussed with a doctor. In addition to medication, psychotherapy is recommended. These therapies include cognitive behavioral therapy, interpersonal therapy, and social rhythm therapy. 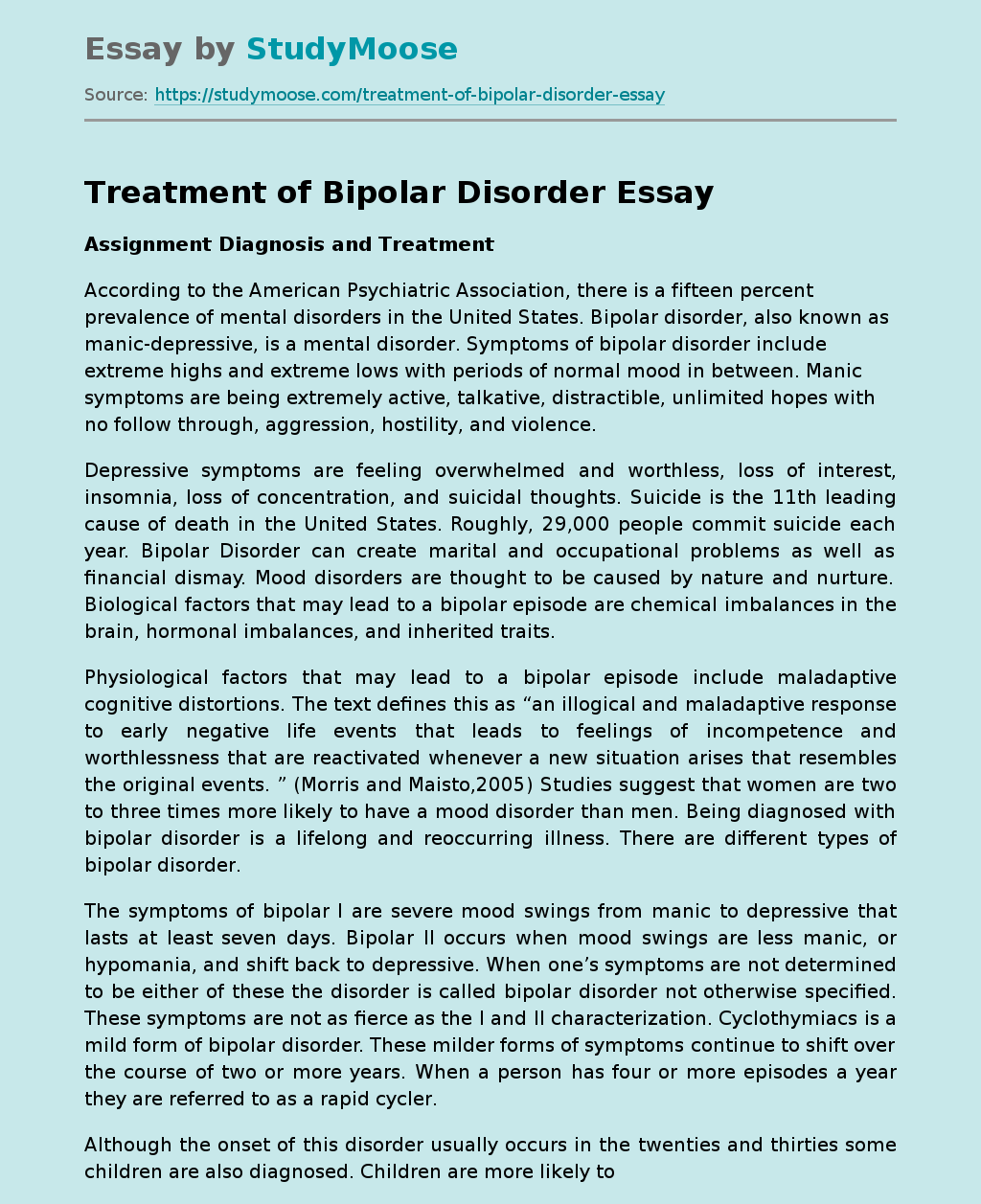