The main characters in the book “Trash” by Andy Mulligan are introduced as Raphael Fernandez and Gardo. Gardo was born six hours ahead of Raphael. Even though they are not brothers, Gardo looks out for Raphael. He is more built with muscle while Raphael on the other hand, is skinnier and smaller. They support each other’s decisions and are there for each through thick and thin. Both their personalities are filled with courage and perseverance. Raphael’s Auntie is another main character in the story and is first mainly introduced when the police talk to them if they had seen a handbag anywhere while shifting through the piles at the dumpsite.

Turn in your highest-quality paper
Get a qualified writer to help you with
“ “Trash” by Andy Mulligan ”
Get high-quality paper
NEW! AI matching with writers

She is very protective and is a huge part of Raphael’s only family besides Gardo. Auntie was once charged from the police and had a bad reputation with them. She will always put Raphael and Gardo first before maintiaing her health and issues. Rat also plays a critical role in “Trash” as he helps to reveal untold secrets from the history of the handbag.

He is first introduced when Raphael and Gardo ask Rat to hide the handbag for them unless the police ever come snooping through Raphael’s three -story house. Rat’s real name is Jun-Jun.

He is a younger boy that is three or four years younger than Raphael and Gardo, he was given the nickname “Rat” because he used to live with rats and had come to look like one with a a pinched face.

He was also one of the boys in Behala that Raphael knew of who didn’t have any family. Settings There are several settings that take place in the novel “Trash” by Andy Mulligan. All settings take place in Behala, which is a very poor city that holds Mission Schools for kids with no home and/or education. It is a place where not many crimes take place and where pesos are not given out for free.

The dumpsite is where all the characters work to trade in re-usable trash such as cardboard, used pens, plastic, rubber etc. to earn pesos. Another setting is Raphael’s home. He lives a slight higher compared to the others that attend the Mission School. It’s two rooms built out of truck pallets, debris, canvas and mainly plastic keeping it stable and together. His house is stacked over three other families below. In Raphael’s house, he stores his trash mementos inside a beer crate. In the beer crate, he hides the handbag with the wallet and the key.

A smaller impacted setting was Rat’s hole where he lived. Here, Raphael and Gardo asked him if they could hide the handbag there until the whole situation calms down and the police lose their patience and decide to give up. A more commonly known setting that takes place in “Trash” was the Central Train Station. Here, Rat was able to identify the key from the wallet as a locker key to clues from Jose Angelico. After opening the locker, they had taken an envelope dedicated to a prisoner and was chased out of the station by two security guards.

The last setting that takes place in “Trash” was the Behalian Police Station. Here, Raphael, Gardo, and Rat were meant to be taken into questioning for all their reasoning behind it. Instead, the officers split up Gardo, Raphael and Rat into three different rooms with only a chair, table, and toilet, not too long after, Auntie surprisingly shows up with keys in the intention of escaping. As she unlocked every door and released the three boys, the four were never to be seen again. 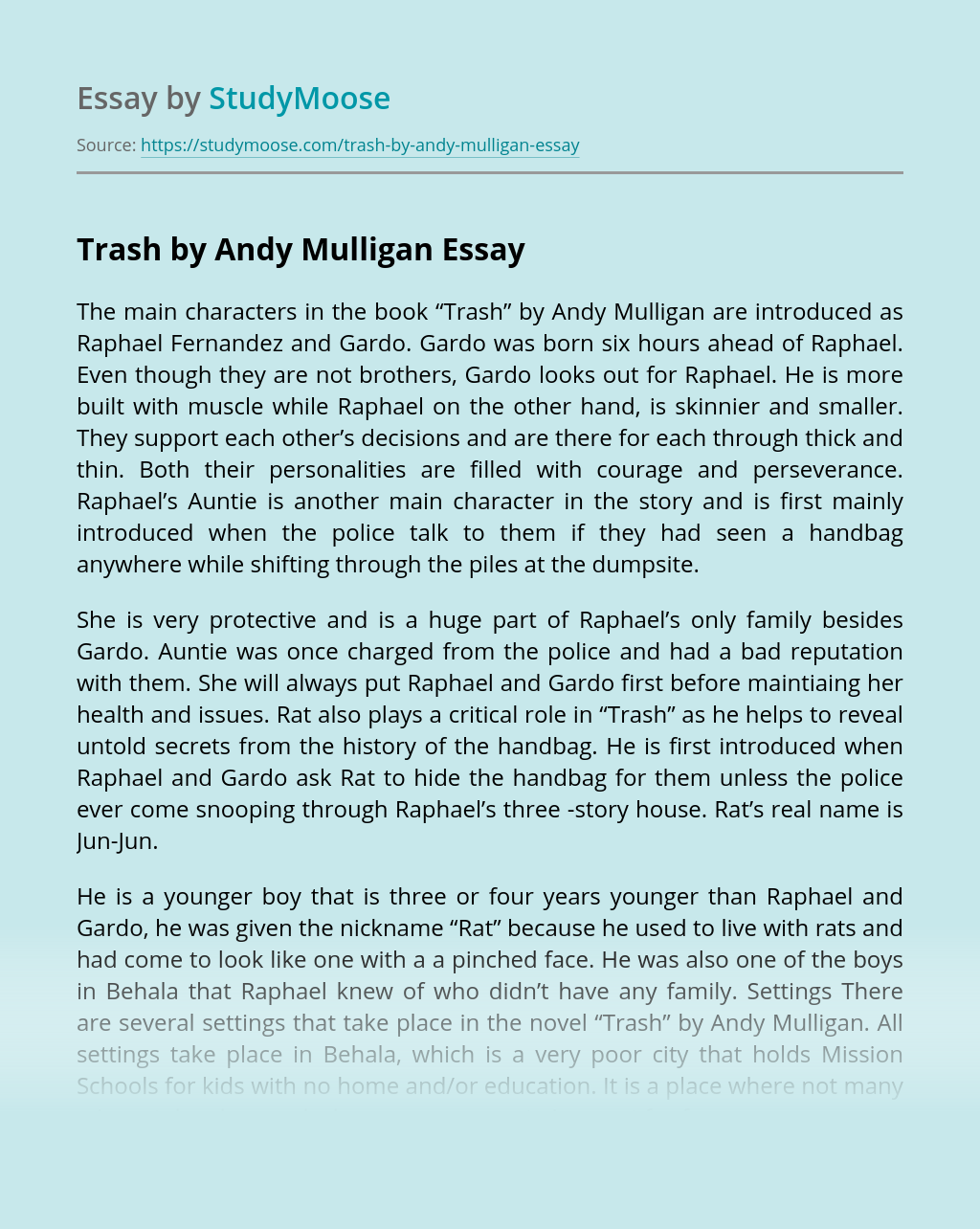 Turn in your highest-quality paper
Get a qualified writer to help you with
“ “Trash” by Andy Mulligan ”
Get high-quality paper
Helping students since 2015
Stay Safe, Stay Original