Translation is process which requires deep knowledge of both first language (Mother tongue /regional) and second (Foreign / target language) like universal language English and national language Hindi. Translation become ideal when translator succeed in provide accurate meaning of the text, He must know how to construct sentence and grammar, these elements helpful for make translation original or natural. Vijay Tendulker is Marathi play writer whose plays translated in to universal language English. Tendulker not only emphasize on individual problems but also social which attract audience towards theatre.

Don't use plagiarized sources. Get your custom essay on
“ Translation is process which requires deep knowledge of both first language Mother ”
Get custom paper
NEW! smart matching with writer

Vijay Dhondopant Tendulkar was born on 6th January 1928 in Girgaon situated in Mumbai capital of Indian state Maharashtra. He took his final breath on 19 May 2008. He was all rounder in various arts like dramatist, movie and television writer, literary essayist, political journalist, and social commentator. He is popular for his plays Shantata! Court Chalu Aahe(1967), Ghshirm Kotwl (1972), and Sakhrm Binder (1972). Tendulkar’s plays based on real-life incidents or social problems. His goal is clear to focous on harsh realities.

Base of Tendulker’s Play’sTendulkar is a famous Marathi dramatist who achieve prestigious place in the galaxy of international playwrights. He successfully reaches on landmark which recorded in golden words in the history of the Indian theatre. Tendulkar skillfully Use historical incidents happened during the Peshwa regime, the playwright focuses on those backdrops of kings in the form of violence, treachery, sensuality, and immorality latent in contemporary politics and reveals the fact that hypocrisy, greed, and brutality characterize power politics.Vijay Tendulker’s plays translated in English by Bengali writer Samik Bandopadhyay.

Translation is process which requires deep knowledge of both first language Mother. (2019, Aug 20). Retrieved from https://studymoose.com/translation-is-process-which-requires-deep-knowledge-of-both-first-language-mother-essay 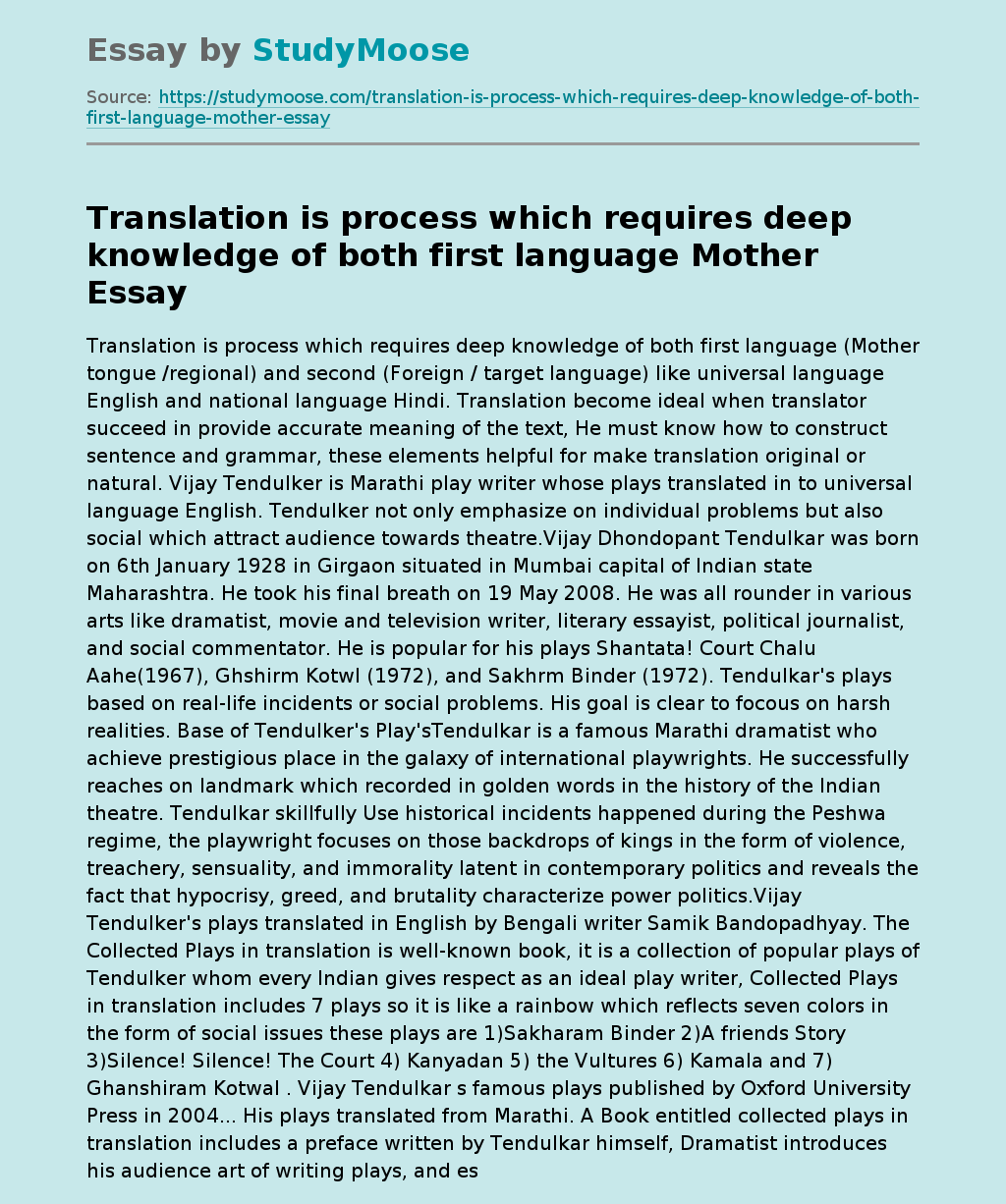