Translation Analysis of Language in Most

Sławomir Mrożek addressed his story to a circle of educated Poles, who would understand the subtle irony contained within his work. Mrożek leaves no doubt as to the historical context of his work. Time of the action can be verified by numerous allusions to the Polish post-communistic period.

The main character of the story is trying to get an economic aid and as we know from the history, Polish government started granting loans and credits after the economic reform, which places the story in the early 90s.

Turn in your highest-quality paper
Get a qualified writer to help you with
“ Translation Analysis of Language in Most ”
Get high-quality paper
NEW! AI matching with writer

The action takes place in a Polish village. The story is written in the first narrative. Sławomir Mrożek uses irony in “Most” by contrasting an educated expert from the capital with backward society of a village in Poland.

Polish language enables its users to use shortened constructions without subject, e.g. “Most na rzece macie, ale nikt go nie używa”, in English there is no such thing as implied subject, hence the translation: ”You have a bridge across the river but nobody uses it”.

The translator split certain sentences into two separate ones to make it easier for addressees to read, e.g. “To nie przez zacofanie, tylko dlatego, że most za komunizmu był zbudowany i ludzie nie mają zaufania.” – “Being backward has nothing to do with it. It’s just that the bridge was built under communism and nobody trusts it.”.

The author of the original story uses rhetorical question ”A co czy on coś nie tego…” this point is also sustained by the translator: ”Is this bridge not quite?”.

Sławomir Mrożek changed the word order in the sentence “tego kapitaliści nie zrozumieją” to emphasize the meaning and to highlight the most important word.

This construction is impossible in English, that is why Yolanta May translated this sentence as “the capitalists will never understand that”. Dialog differs in both versions. In Polish version it is written in an unconventional way, to identify the current speaker we have to look in the context of the story. In the English translation it is detailed in quotation marks which character is currently speaking.

The lexis used in source text is simple, familiar, colloquial and mostly concrete, while the lexis in target text is slighlty more enhanced. The word “gmina” means the principal unit of administrative division of Poland at its lowest uniform level. It does not have the exact meaning of “council”, the word “gmina” does not have the befitting equivalence in English. It is often translated as “commune” or “municipality”. The translator has successfully accomplished to translate Polish idiom “w bród przejeżdżać” into ”wade across”. English version contains more enhanced vocabulary and structures, e.g. “chyba, żeby pan sam dał przykład” and “it would help if you were to set an example”.

The word “wahać się” was translated into English as “uneasy to start with”, the more appropriate word in this case would be “to waver” or more literal equivalence – “to scruple”. It seems that the translator has mistakenly translated the word “kredyt” into “economic aid”. Nonetheless, the meaning of “economic aid” makes sense in the context of the source text. The word “furmanka” loses its colloquial sense in the English translation “horse and cart”, however its meaning has been sustained by the translator.

The translator has successfully managed to translate all problematic words and expressions. The original Polish version contains more shortened constructions and sentences with implied subject. The language is more colloquial which makes it easier to read. A conversation held by characters is looser and unfettered, which gives the whole text a more ironic sense. The English translation is characterized by more enhanced vocabulary and complex constructions, the text is stiffer, which takes a little of story’s humour. Overall the translator kept the sense of the story and its source of humour and irony, which makes it a good translation.

Translation Analysis of Language in Most. (2016, Sep 18). Retrieved from https://studymoose.com/translation-analysis-of-language-in-most-essay 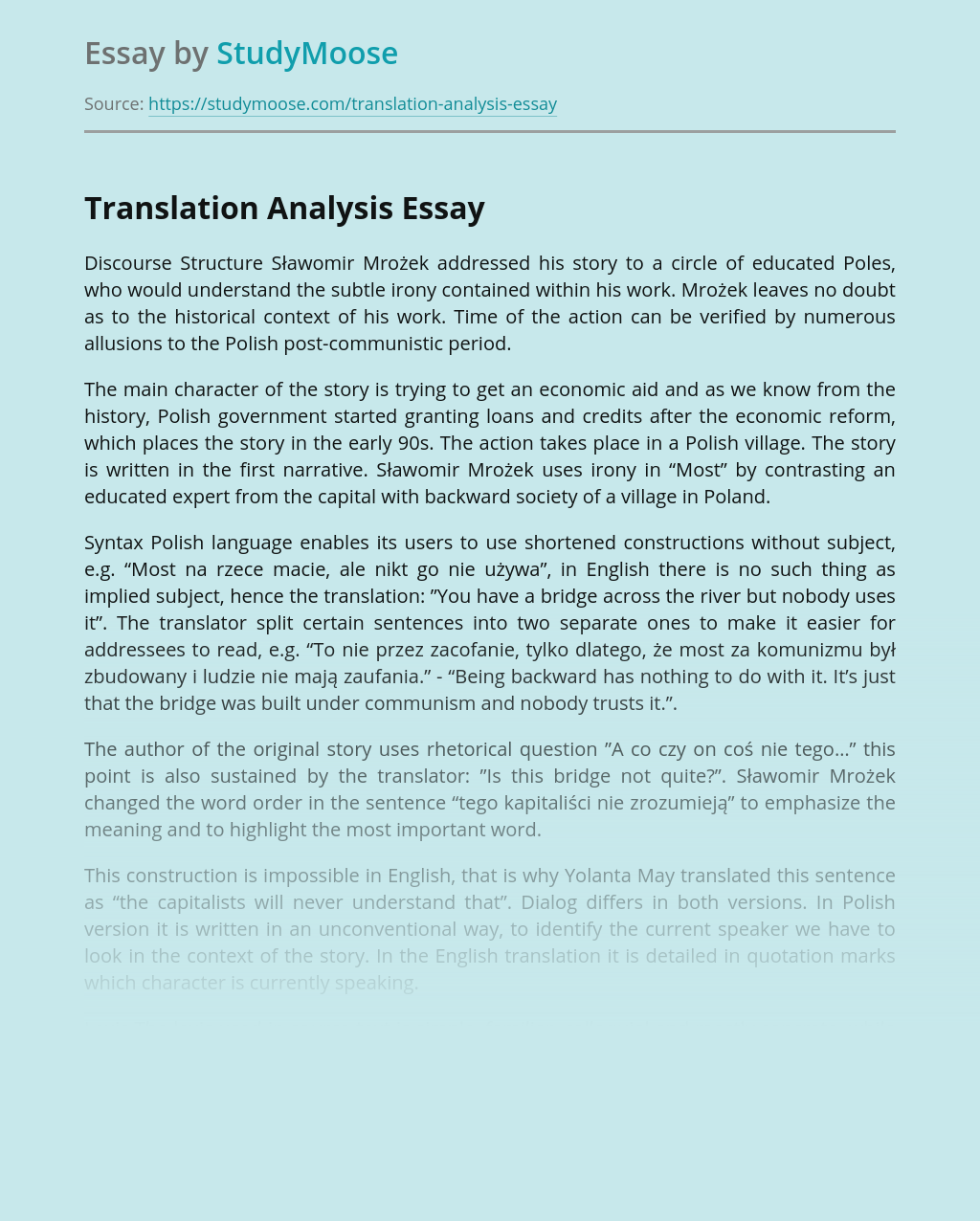 Turn in your highest-quality paper
Get a qualified writer to help you with
“ Translation Analysis of Language in Most ”
Get high-quality paper
Helping students since 2015
Stay Safe, Stay Original