Transition between Adolescent and Young Adulthood

Human being experiences different stage of development in their life. This development might be rapid or slow. each stage is related to specific needs in relation to identity construction and interpersonal communication (Steijn, 2014). One of the human development is adulthood which refers to psychological and biological changes of individuals that occur after adolescence. At this stage people are physically and mentally mature. Adulthood commonly starts abound 20 to 40-year-old. Consequently, users of SNSs have different SNSs behavior according to which age group they belong to.

Don't use plagiarized sources. Get your custom essay on
“ Transition between Adolescent and Young Adulthood ”
Get custom paper
NEW! smart matching with writer

The concept and theory of emerging adulthood has been formulated by Jeffrey Arnett which covers age from 18-29 but its focus on 18 to 25-year-old individuals. Arnett consider emerging adulthood as that emerging ‘transition age youth’. It is a transition between adolescent and young adulthood. Arnett defines this stage as: definition: “Emerging adulthood can be said to exist wherever there is a gap of at least a few years between the end of puberty and the entry into stable adult roles in love and work” (2015, p.

On the other hand, according to Erikson’s theory young adulthood range from 20- 40year-old which is between emerging and middle adulthood. at this stage friendship and romantic relationship commence (Erikson, 1968). Young adults are characterized as setting down. Erikson noted that life stage in related to culture and we can not consider is as a universal issue and will be changed in future. people in their thirties start to create more concurred boundaries. and due to new family relationship and work-life young adult will have less time to spend with their friend (Crocetti & Meeus, 2014; Steijn, 2014). Hence, SNS play a key role for young adults to maintain relationship and contacting with other groups (Steijn & Schouten, 2013). That is to say, young adults utilize Facebook to gain bounding social capital that facilitate their online relationships. In contrary, individuals at emerging adulthood stage use SNSs like Facebook to form “bridging social capital” with people who they have weak relationships (Ellison, Steinfield, & Lampe, 2007). Another feature of young adulthood is creating boundaries to have a balance in sharing personal information on SNSs. in fact, they are aware to share what sort of information with which social groups (e.g., family members, colleagues, high school friends). in relation to online privacy, one study suggested that young adult users of Facebook actively manage and regulate their privacy setting (Christofides et al., 2009).

In summary, determining exact transition time between life stage is challenging. there are different classification of life stage. In this dissertation individuals from 18-29 are considered as emerging adulthood and individuals from 30-40 reflect young adulthood emerging adulthood which is between 18 to 29-year-old have been characterized as stage for identity exploration. They are legally considered as adults. young adulthood is an stage form 30 to 40 year-old that people are more independent have a role in marriage and career and family . Individuals at different life stage have different conception and behavior about privacy on SNSs (Steijn, 2014).

Transition between Adolescent and Young Adulthood. (2021, Sep 22). Retrieved from https://studymoose.com/transition-between-adolescent-and-young-adulthood-essay 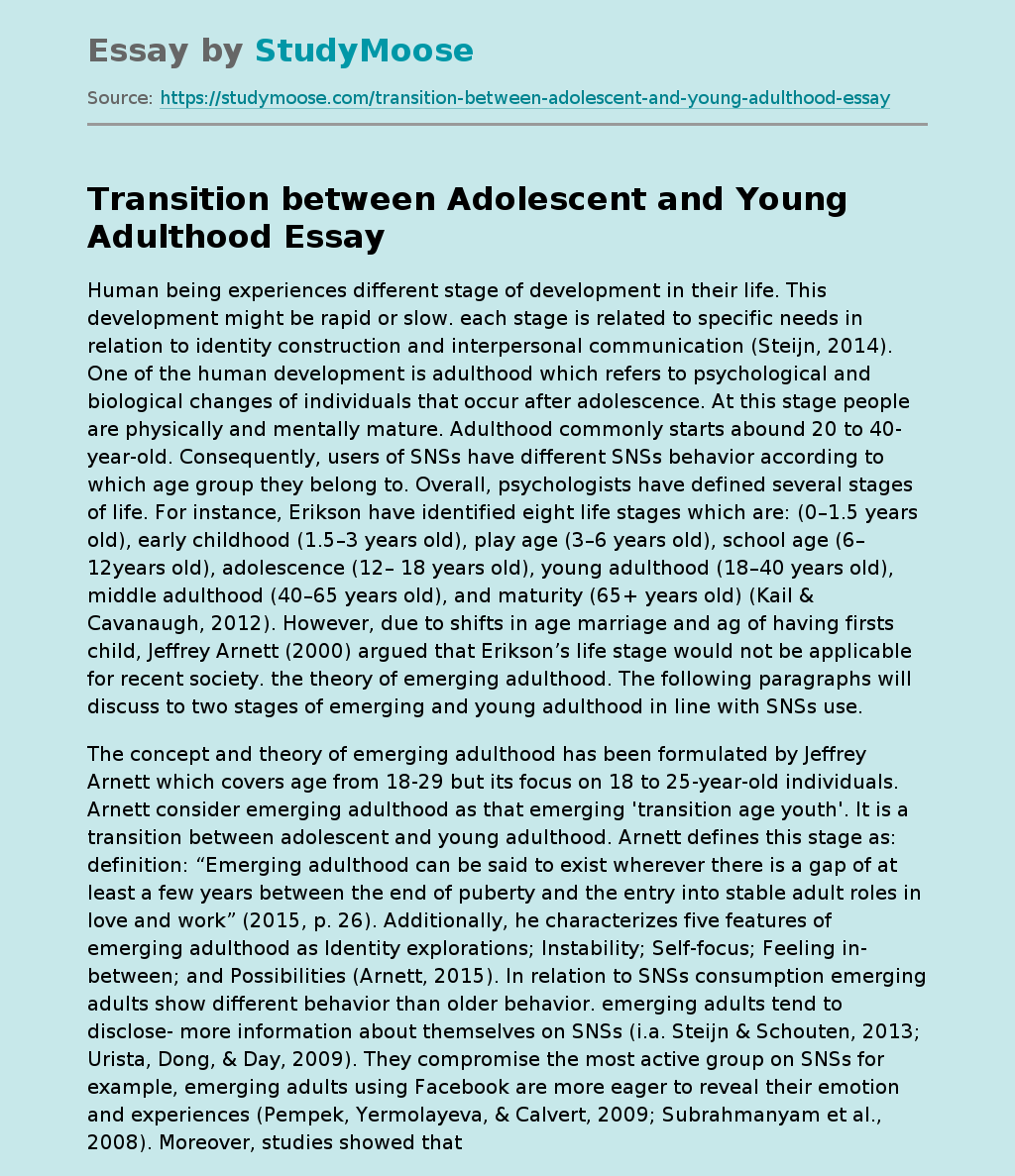