Transformations Of Macbeth And Lady Macbeth

Shakespeare’s Tragedy of Macbeth is a play analyzing evil in people, and the nature of that evil. It also shows the struggle that people have when deciding on a certain action to take, or a struggle with a decision already made. In the play, Shakespeare uses Macbeth and Lady Macbeth to portray some of the different types of evil that can manifest in a person.

Macbeth begins the play as a celebrated war hero, Thane of Glamis, and a man who had slain Macdonwald and fought off an attack by Norway.

Don't use plagiarized sources. Get your custom essay on
“ Transformations Of Macbeth And Lady Macbeth ”
Get custom paper
NEW! smart matching with writer

For this, Macbeth was titled Thane of Cawdor, the title previously held by Macdonwald. However, after the visit to the witches in which Macbeth is told he will be king, a secret fire ignites inside Macbeth. He contemplates killing King Duncan, especially after being further pursuaded by his deranged wife, Lady Macbeth. This is when Macbeth’s gradual change from noble hero to possessed killer begins. Evil has dawned within him, but at this early stage of his transformation Macbeth is ashamed of his evil urges.

Soon, however, Macbeth is overcome by his ambition and his fall begins. He says, “I have no spur to prick the sides of my intent, but only/ Vaulting ambition, which o’erleaps itself/ and falls on the other.

” (I, vii, 25) As soon as the descision to murder Duncan is made, and until his death, Macbeth is a vessel relentlessly filling with evil. Evidence of this is the killing of Banquo, which Macbeth orchestrated. His evil is one of action, decisions without much thought behind them. With that in mind, one can see the pattern, where killing Duncan led to killing Banquo (because the witches said he’d have kings in his family and Macbeth felt threatened by them). This led to the attempted assassination of Macduff (which failed, but led to the slaughtering of his entire family).

In direct contrast to Macbeth, from the moment the audience is first introduced to Lady Macbeth, she is pure evil. We meet her in Act I, scene v, as she is reading a letter from Macbeth, telling of the witches prophecies. With this, she begs to become even more evil, saying “Come, you spirits/ That tend on mortal thoughts, unsex me here./ And fill me from the crown to the toe top-full/ Of direst cruelty! make thick my blood;/ Stop up the access and passage to remorse, That no compunctious visitings of nature/ Shake my fell purpose, nor keep peace between/ The effect and it! come to my woman’s breasts,/ And take my milk for gall, you murdering ministers,/ Whatever in your sightless substances/ You wait on nature’s mischief! Come think night,/ And pall thee in the dunnest smoke of hell,/ That my keen knife see not the wound it makes,/ Nor Heaven peep through the blanket of the dark,/ To cry ‘Hold, hold!'” (I, v, 36).

In the play, it seems as though this speech is made to give her what is needed to convince her husband to kill Duncan. However, one may make the argument that though she may be evil, this soliloquy is symbolic of the weakness she feels, where she depends completely on her husband for her social status. This theory is further supported in the beginning of Act V, scene I, when the Lady is sleepwalking, trying to wash the “blood” off of her hands. In this scene, the reader sees that there is guilt behind Lady’s persuasion of her husband to commit the terrible deeds. Lady Macbeth’s evil is not so much an action or physical form of evil, because she didn’t commit any terrible actions against anyone in the play. Her evil is one of the mind, which gets the best of her when she kills herself (at least that’s what we’re lead to believe).

The evils presented by Shakespeare in the play are two very different forms of evil. Lady Macbeth’s greatest advantage in her evil is also her biggest downfall, because she dealt more with the emotional standpoint of the evil. Macbeth’s evil is brutal and impatient, he just reacted to every murder with another murder, his biggest weakness was his inability to manage the psychological aspect of his deeds.

Transformations Of Macbeth And Lady Macbeth. (2016, Jul 14). Retrieved from http://studymoose.com/transformations-of-macbeth-and-lady-macbeth-essay 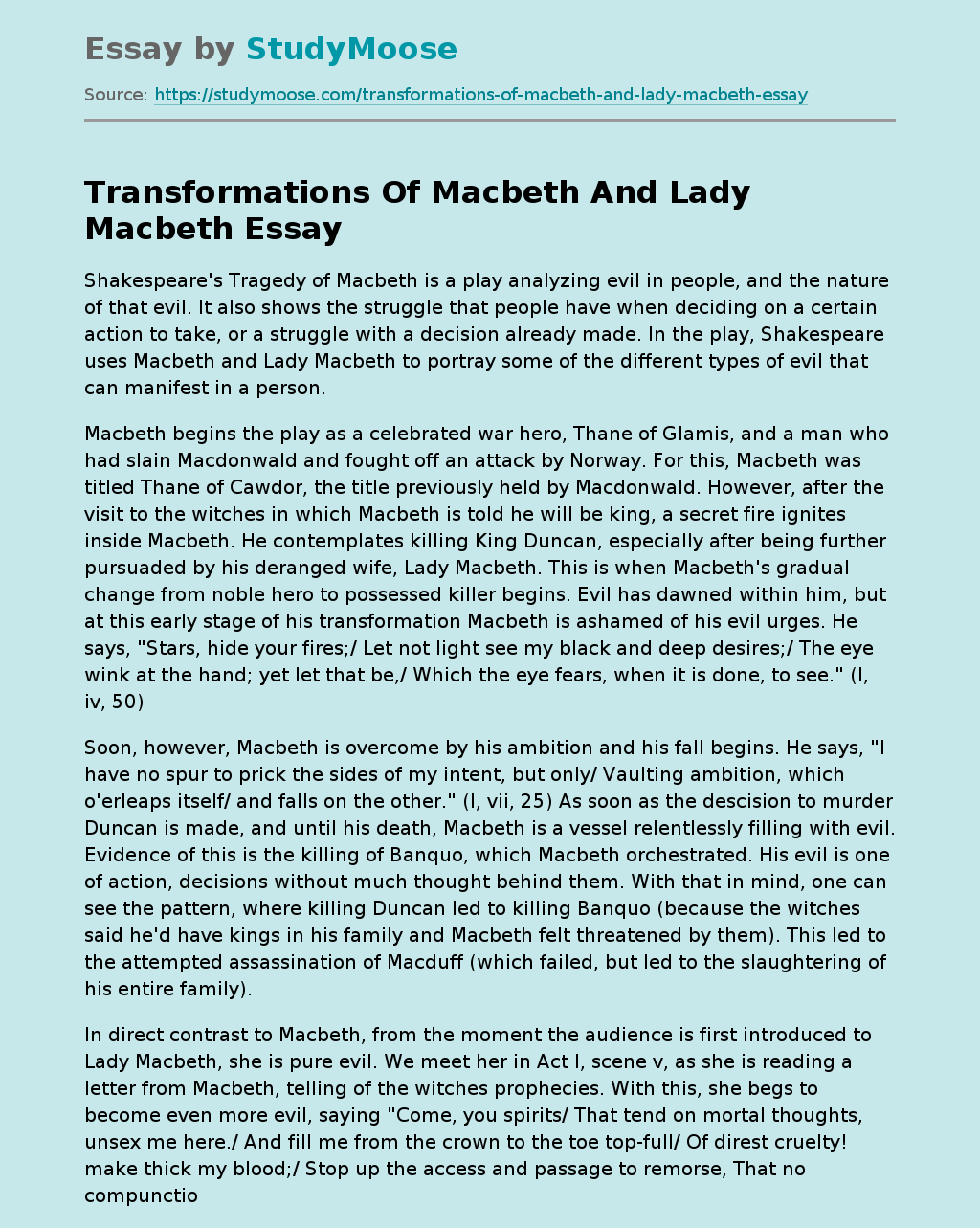