Transformational grammar – is a linguistic theory also known as transformational-generative grammar. It arose in the 1950’s and considers the most important task of descriptive linguistics to be the construction of a transformational grammar. The theory was founded by the American linguist N. Chomsky; other adherents have included R. Lees, C. Fillmore, E. Klima, E. Bach, J. Katz, J. Fodor, M. Bierwisch, and R. Rüzicka. In the late 1960’s the concept of deep structure was reexamined owing to a growing need to relate syntactic description with meaning.

Don't use plagiarized sources.
Get Your Custom Essay on Transformational Grammar Just from $13,9/Page

Transformational-generative grammar divided into two schools. The first school, headed by R. Jackendoff and R. Dougherty, was that of interpretive semantics. It retained the concept of deep structure but permitted rules of semantic interpretation that use information other than the information contained in the deep structure. The second school, that of generative semantics, rejected the concept of deep structure and developed rules for generating the sentences of a language directly from their semantic representations.

The main representatives of this school are G. Lakoff, J. McCawley, J. Ross, and P. Postal. TG is based on the concept of a universal grammar (UG) which is the set of rules for language that all humans possess thanks to the common genetic features which distinguish them from other organisms and make them “”human.””

When it comes to syntax, [Noam] Chomsky is famous for proposing that beneath every sentence in the mind of a speaker is an invisible, inaudible deep structure, the interface to the mental lexicon. The deep structure is converted by transformational rules into a surface structure that corresponds more closely to what is pronounced and heard. In transformational grammar, the term ‘rule’ is used not for a precept set down by an external authority but for a principle that is unconsciously yet regularly followed in the production and interpretation of sentences. A rule is a direction for forming a sentence or a part of a sentence, which has been internalized by the native speaker. The rationale is that certain constructions, if they were listed in the mind as surface structures, would have to be multiplied out in thousands of redundant variations that would have to have been learned one by one, whereas if the constructions were listed as deep structures, they would be simple, few in number, and economically learned. Returning to the more general mathematical notion of a grammar, an important feature of all transformational grammars is that they are more powerful than context-free grammars. This idea was formalized by Chomsky in the Chomsky hierarchy. Chomsky argued that it is impossible to describe the structure of natural languages using context-free grammars. His general position regarding the non-context-freeness of natural language has held up since then, although his specific examples regarding the inadequacy of CFGs in terms of their weak generative capacity were later disproven. Unlike the structuralists, whose goal was to examine the sentences we actually speak and to describe their systemic nature, the transformationalists wanted to unlock the secrets of language: to build a model of our internal rules, a model that would produce all of the grammatical–and no ungrammatical–sentences. 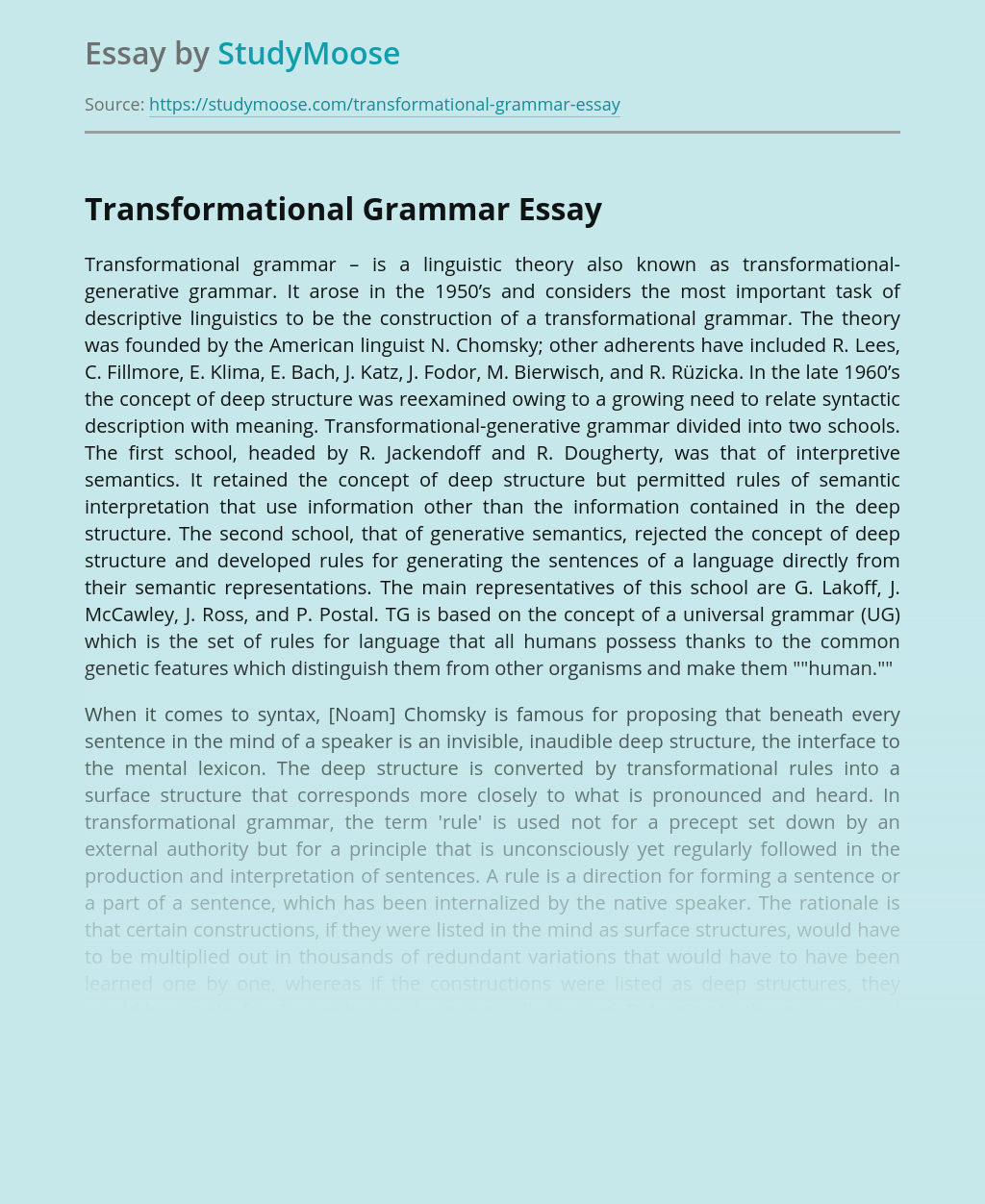 Sony Ericsson In 2001 telecommunications leader Ericsson and the Sony Corporation joined forces to establish Sony Ericsson Mobile Communications. Because of this joint venture, Sony Ericsson recognized sales of over seven billion dollars in the first year. This was mainly because the combined mobile phone business company now offered a range of mobile communication products...

Joining in the workshop involves many risks due to the use of high currents, temperatures and flammable gasses. Arc/Mig/Tig Welding – During these welding types high currents are being used so it is important to isolate the process from anything that may catch fire or cause the operator any electrical shock (oil, water, rags etc)....

Marketing plan is the representation of the ideas in which the organization will put in place to ensure that it accomplishes its objectives and attain their goals within the set period of time. For this instance, the paper will look at the marketing plan of an organization that will be dealing with the decoration of...

Immigrating is one of the biggest changes that an individual may face in life. Moving to a new country and adapting to a different environment is complicated and challenging. Brother by David Chariandy is a Canadian novel about the hardships of growing up in a poor immigrant neighbourhood. David Chariandy takes the readers inside the...

Today’s society is a clear example of what is called a “rape culture”, the way we are taught to think and act by our parents and everyone we know has made it this way. There are lots of examples out there, we don’t even need to look hard for them, we just need to open...