Amy Heckerling transforms the many values and issues conveyed in Jane Austen’s Emma, set in the 18th century in Highbury to her teen pic film Clueless set in the 20th century, in a high school society. Both texts involve a protagonist, being Emma in Emma and Cher in Clueless who meddle with the relationships of others as their interest, while being “placed in the midst of those who loved her, and who had better sense than herself”. The protagonists are morally transformed towards the end of the film and novel when they slowly realise the error of their ways.

Don't use plagiarized sources. Get your custom essay on
“ Transformation: Emma and Clueless ”
Get custom paper
NEW! smart matching with writer

The texts explore unchanged values while highlighting society changes through the transformation of values. Heckerling and Austen convey the values marriage, integrity versus wealth and social status through cinematography and writing techniques such as dialogue, characterisation and stereotyping. A value which Austen conveys through her text Emma is the importance of marriage in relation to “climbing” the social ladder.

This can be seen through the determination of Emma in finding a man of a higher social status for Harriet, and dialogue, when she describes Mr Martin as “A young farmer (Mr Martin), whether on horseback or on foot, is the very last sort of person to raise my curiosity” and would therefore not be suitable for Harriet who should be aiming for a man of higher social status.

In contrast, marriage is conveyed as a less important value in Clueless, as in the 20th century, women have been able to live independently, although relationships are still highly valued.

Since marriage has become an option for women, virginity is portrayed as a highly valued aspect of women, which can be seen through Cher’s white dresses that she wears, and dialogue, when she states that she will not have sex “until I find the right person”, romance is alluded to in the novel but there is no overt physical displays of emotion, Austen just hints at it.

A value that is cherished in society is charity which is presented by the male protagonist, Mr Knightly, and Austen uses the technique of characterisation to display this in the text. Austen characterises Mr Knightley as Emma’s life advisor and role model, therefore influencing her through his charitable personality. Mr Knightley displays his value of through the way he treats and looks at those of a lower social status than him, such as Miss Bates and Mr Martin. When Miss Bates was mistreated by Emma at the party, Mr Knightley conveys the value of charity through his dialogue when he says “How could you have been so brutal, so cruel to Miss Bates!”, which shows his respect for Miss Bates.

Heckerling shows how similar values of charity have been transformed over time through the stereotype of Josh, who demonstrates charity through the Amnesty International pins he wears and his awareness of world news. The setting of the film being in the 20th century in a globalised world, charity no longer happens within small groups, as “It’s considered cool to know what’s going on in the world”, and his awareness of world news conveys the importance of charity globally.

Another value which the communities hold in high esteem is that of the importance of social status and how it has been transformed in different contexts. The aspect of wealth is displayed to be directly linked to social status, as Emma is rich from inherited money, and Cher is rich from her father’s high income job as a lawyer. The technique Austen uses is dialogue and formal language. The dialogue of the characters conveys how social strata affects those in Emma and Cher’s society. Austen uses Emma’s decisions in matchmaking to convey how important it was to marry to a higher social status and therefore wealth.

For example, Emma clearly looks down on those with a lower wealth or social status, such as the Coles, who she has a negative overreaction for, as they have a “low origin in trade”. In Clueless, Heckerling uses costuming and music to convey the idea of social status in regard to integrity and wealth. An example of this can be found on Tai when she first arrives at school and Amber says “she could be a farmer in those clothes”, which reflects her low social status in the school, resulting in the ill treatment she receives. During the makeover of Tai, the music “I want to be a supermodel” and the new style of clothing she wears reflects the fact that she has raised her social status. Although Heckerling has transformed the context of Emma into 20th century America, the values she conveys are very similar to the ones conveyed by Austen.

Many of these values we hold in high esteem today, we respect people who have integrity, moral fibre and charity. Both texts are examples of bildungsroman, where protagonists undergo a moral transformation, see the light in their pathways, and understand that what they held to be important before is not as important as what it was. Cher realizes that “I was totally cluless” and “wanted a partner of my own”, and Emma realizes “She had never been more sensible of Mr. Knightley’s high superiority of character” when she discovers her love for him.” “The more things change, the more things stay the same”. 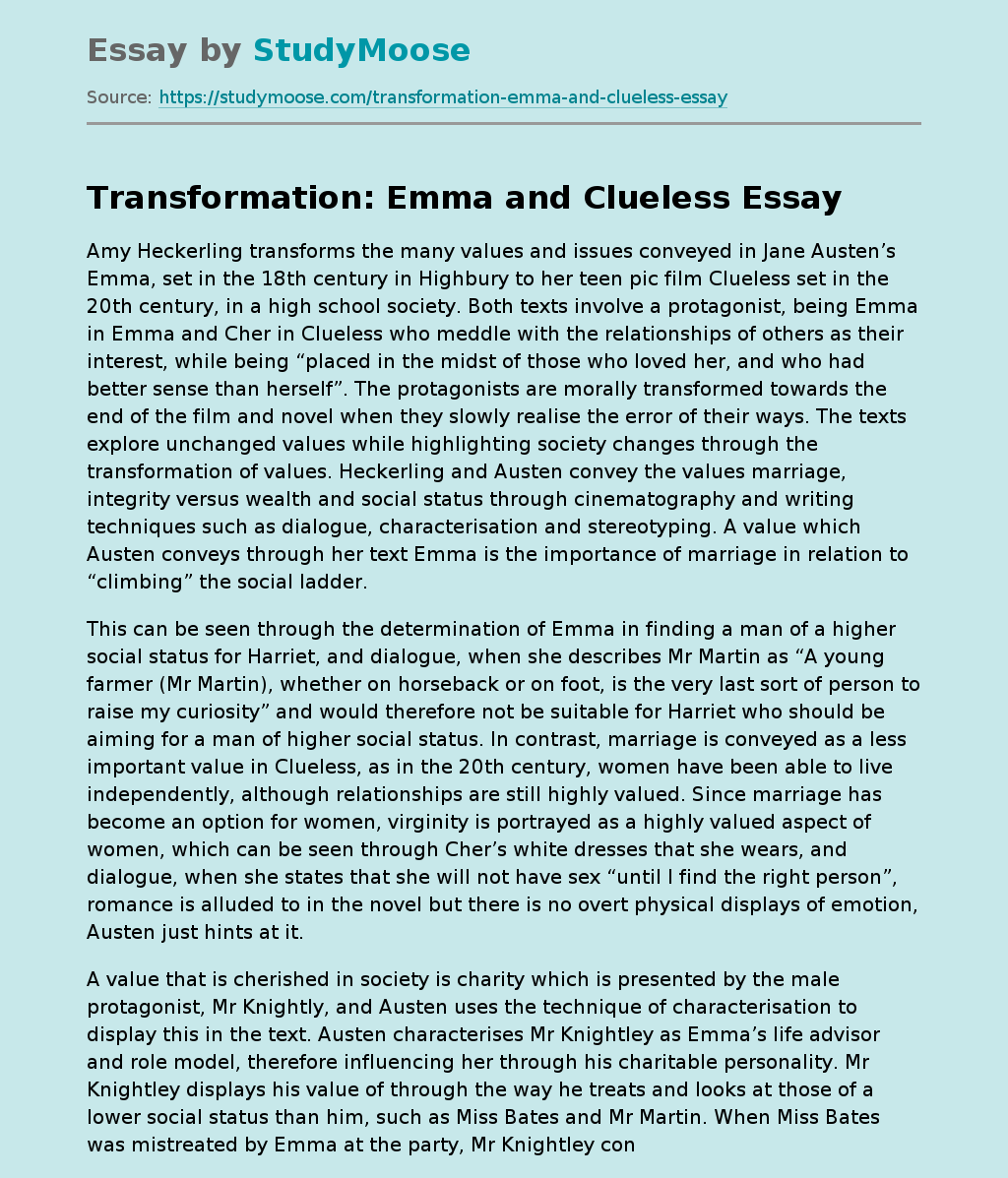