Transcript of a Short Story A Moonlight Fable

A Moonlight Fable H.G.Wells Background Beginning Middle Ending Ending Cont. Middle Cont. Symbols H.G. Wells was an English author in the science fiction genre. He is known as the “Father of Science Fiction.” He began studying in biology and soon wrote novels on the Darwinian theory. Wells is known for his haunting and unpredictable stories. A mother sews a suit for her son and he loves it so much he wants to wear it all the time. His mother insists that he keeps it safely locked away until a special day.

Don't use plagiarized sources. Get your custom essay on
“ Transcript of a Short Story A Moonlight Fable ”
Get custom paper
NEW! smart matching with writer

He adored it so much that he dreamt about it, but would only wear it once a week. His mother let him wear the suit as long as the buttons were covered in tissue so they wouldn’t tarnish.The boy was attentive to the buttons and saw them getting duller, which caused him anxiety.

On night, when the moonlight shined through the window, the boy finds the urge to put the suit on.

He tears all of the tissues and protective items off. He hurries out of his house and into his mother’s garden in the suit. He runs carelessly through the garden letting the thorns rip the jacket. He then runs into the duck pond and swims around. After swimming in the pond, he sees a moth and lets it fly around his head. He chases it and falls into a pit without noticing. The next morning, he is found dead at the bottom of the pit.

Moonlight-Opportunity to change When the moonlight the story, the man begins to venture into wearing his suit The moonlight in the garden drives him to run through the thorns Buttons-Hopes and happiness.

Throughout the story, his happiness is suppressed and hidden like the buttons When he takes of the tissue, he is liberated and can finally be happy Garden- freedom In the garden, the boy is happiest and can be free. When he dies in the lake, he is smiling showing that he was finally free and happy Symbols Cont. Setting and Characters Characters: the young boy and his mom Setting: In their home and church, not time is specified, most significant occurrences are during the night Important Quotations “It seemed to him the moonlight was not common moonlight, nor the night a common night, and for a while he lay quite drowsily with this odd persuasion in his mind.” “He did not care, for he knew it was all part of the wearing for which he had longed.” “‘Do you think my clothes are beautiful, dear moth? As beautiful as your scales and all this silver vesture of the earth and sky?'”

In this short story by H.G. Wells, a young man loves a suit that his mother sews for him. He loves this suit so much, he wants to wear it all the time. His mother however insists he keep the suit safely packed away until his wedding day.

It was green and gold and woven so that I cannot describe how delicate and fine it was, and there was a tie of orange fluffiness that tied up under his chin. And the buttons in their newness shone like stars. He was proud and pleased by his suit beyond measure, and stood before the long looking-glass when first he put it on, so astonished and delighted with it that he could hardly turn himself away.

The boy loved his suit so much that he dreamt about it. He would often take the suit out of it’s storage and admire it. His mother allowed him to wear the suit on Sundays to church, but with tissue covering the buttons so they wouldn’t tarnish and tacked on protective guards on the elbows and cuffs so they wouldn’t tear. Whenever the boy would peek at the buttons under the tissue wrap, he would notice they were becoming duller and duller, and this would cause him anxiety. One night he sees the moonlight shining into his bedroom and he gets out of bed with an urge to put the suit on. He makes up his mind to tear off the protective tissue and guards off the suit.

Thought joined on to thought like things that whisper warmly in the shadows. Then he sat up in his little bed suddenly, very alert, with his heart beating very fast and a quiver in his body from top to toe. He had made up his mind. He knew now that he was going to wear his suit as it should be…

Transcript of a Short Story A Moonlight Fable. (2016, Mar 24). Retrieved from https://studymoose.com/transcript-of-a-short-story-a-moonlight-fable-essay 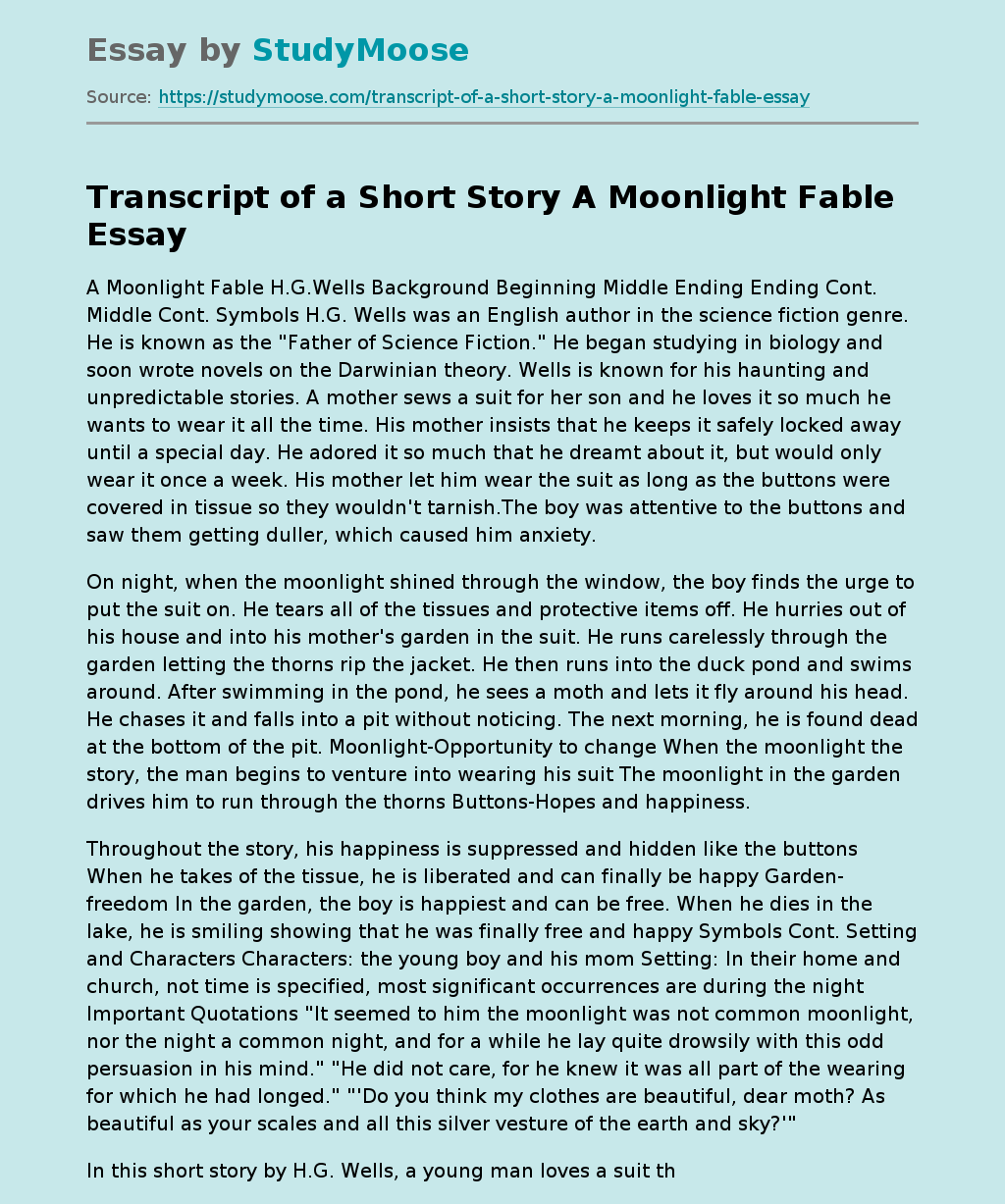