The Holocaust was a horrible event in history. Nearly 6 million Jews were killed during 1941 to 1945. Anne Frank’s famous diary was created during this time. Millions of innocent people got killed in gas chambers filled with a deadly gas. Judens were taken to concentration camps, and death camps. These people had to spend everyday in these terrible camps. Other events including The Olympics of 1936, and Death Marches also took place. Annelies Marie Frank had a very short life. She was born on June 12, 1929, and died on February of 1945.

Don't use plagiarized sources. Get your custom essay on
“ Tragedy of Holocaust and Second World War ”
Get custom paper
NEW! smart matching with writer

She was only fifteen years old when she died in a concentration camp named Bergen-Belsen, which is located in Germany. Margot Frank, Anne Frank’s older sister died in Bergen-Belsen as well. Anne Frank got her first diary for her 13th birthday, on June 12, 1942.

At this point in time, The Holocaust was happening and jews were getting captured by the Nazis to be taken to concentration camps. Luckily, a catholic woman born in Vienna, Austria, named Meip Gies helped Anne Frank by keeping Anne and her family in her attic, until the Nazis captured them during the Holocaust and World War 2.

Meip Gies is also the woman who saved Anne’s diary, which describes Anne’s experience hiding for 2 years from the Nazis. You might be wondering, how did the Nazis manage to kill over 6 million Jews? Well, they used a lot of horrifying ways, one of them being gas chambers. A gas chamber is a very good example of genocide. A famous death camp, Auschwitz, killed about 1.

1 million Jews during the Holocaust. They murdered most of the Judens in Auschwitz using gas chambers filled with a deadly gas called Zyklon B.

The chemical, Zyklon B is made from hydrogen cyanide. This chemical can also be crystallized, and this form of Zyklon B is called Zyklon B pellets. The pellets change its form from a solid to gas when exposed to air. These pellets are usually used for killing pests, such as insects and rats. The Nazis threw in a bunch of Zyklon B pellets through a vent that lead to a room where prisoners were trapped in. It took around twenty minutes for the prisoners to die from the gas. There are even gas chambers that were disguised as showers. Prisoners would go in the showers and not know that the gas was poisonous.The corpses would be burnt and thrown into pits. About 8,000 prisoners died from gas chambers everyday. Millions of prisoners had to stay in the concentration camps, hoping that they would not die. They were still living their daily lives.

A holocaust survivor named Alfred Kantor, somehow managed to paint pictures of the daily life in a concentration camp called Auschwitz, which was the camp that he was in. Mr. Kantor was afraid that the guards would find the paintings, so he destroyed his most of his work. He later recreated his paintings from memory. His paintings show a woman who committed suicide by touching the fenced wire, naked prisoners being considered to live, or get killed, prisoners who carried and loaded corpses from the gas chambers to trucks, smoke coming out of crematories, and more paintings that resemble dreadful events from the camps. Prisoners were given mostly potatoes and soup. There were even a few that were rotten. After their disgusting meal, prisoners were sent to either gas chambers or gas chambers. 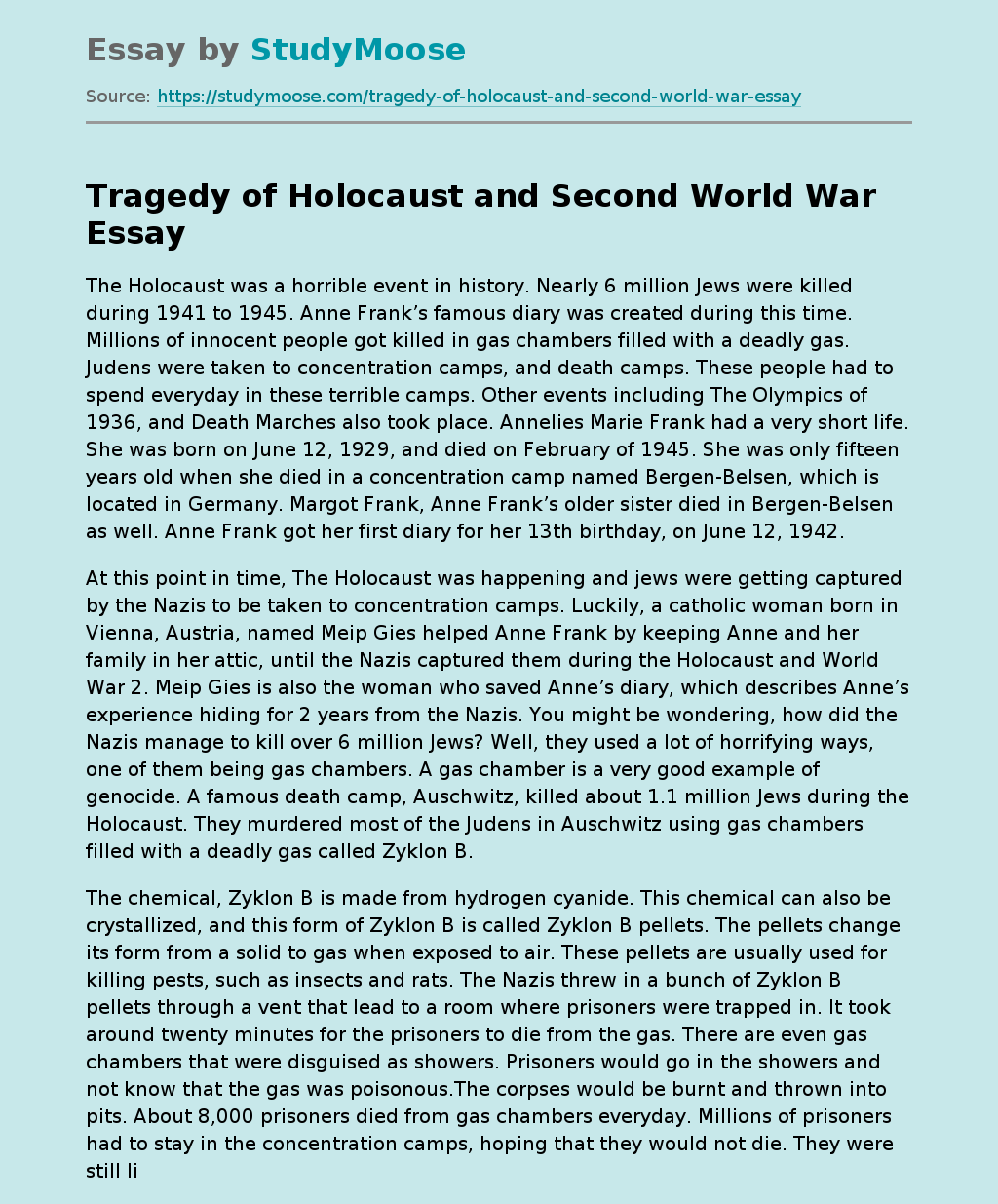