The events of 11 September 2001 inverted the actions that have led the US government to deal with criminals and terrorists in different and wide-ranging principles and measures. Standards that are mildly intrusive, coercive, and less democratic induce Security Departments to break privacies and breach human rights in the name of ‘war on terror’ The power given to the government to prevent and investigate the potential acts of terrorists was not balanced with civil liberties.

These rights were guaranteed by the First Amendment “[to allow] the individuals to speak, think, assemble, worship, or petition without ‘government’ (or even private) inferences or restraints” (thefreedictionary, 2005).

Turn in your highest-quality paper
Get a qualified writer to help you with
“ Trading Liberty for Illusion Analysis ”
Get high-quality paper
NEW! AI matching with writers

Rehnquist, Chief Justice of the United States Supreme Court, concludes in his book, All the Laws but One: Civil Liberties in Wartime, “in any civilized society the most important task is achieving a proper balance between freedom and order” (Rehnquist, 2007, n. d. ).

But the events of 11 September suggest extravagant involvements introduce the security measures. In her article, “Trading Liberty for Illusion,” Wendy Kaminer, a lawyer and the author of several books, argues how the events of the September 11 attacks have affected the civil liberties.

She says that whenever something like this happens, people become afraid, which requires the government to take all the necessary precautions to secure its citizens. But she also adds that those actions go beyond the logical approach to safety.

By attempting to use several surveillance devices to track criminals or abnormal behaviors, Kaminer asserts that such processes are pointless and demonstrated its failures. Kaminer, effectively, displays her claim by accusing the government of ignoring the civil liberties. In fact, issues like civil liberties, electronic surveillance, habeas corpus, and privacy rights have been fundamentally and irreversibly changed in the eye of the US government. The level of support for civil liberties in conjunction with the crises period is undetermined.

Marcus Tullius Cicero (106 – 43), the Roman philosopher, said: “In time of war the laws are silent” (Bill Moyers Journal, 2007, n. d. ). Perceptibly, civil liberties have been restrained and invaded over the past will continue to be now and in the future. However, worst acts have been committed by leaders of the United States. Examples of Presidents John Adams, Woodrow Wilson, and Franklin Roosevelt were provided by Kaminer to support this claim. She shows how President Adam apprehended many people for hings like disloyalty, how President Wilson jailed Eugene Debs for criticizing the US government to “enter the first world war,” and President Roosevelt for his dishonorable decision to arrest the Japanese families in the second World War. However, she mentions that the Supreme Court participation to legitimize the action at that time was for security purposes. Many such facts come into view to affirm that politicians keep classifying people and grind the minorities and ethnic groups only for ideological ostensible sympathy.

According to Kaminer (2002), “Liberty was trampled by all of these measures, while security was enhanced by none of them,” (p. 397). People feel more secure for such actions. Another example Kaminer offers, from the Bush Administration when given the order to hold and “[detain] over one thousand immigrants in the wake of September 11 attack “(p. 398). Kaminer says that most of them had no relation to terrorism. As Kaminer concludes, people who become afraid are to accept and bear the inhibitory and abrasive measures against other to feel safer.

Nevertheless, she points out that proper prospect for such tendencies comes much later. Daniela Caglioti, a modern sociopolitical historian and Associate Professor at Universita degli Studi di Napoli Federico II. , in his essay “Security Versus Civil Liberties and Human Rights”, says that “the outbreak of the war transformed them––independently of their personal story, feelings, ideas, and sense of belonging––into enemy aliens, accused of posing a threat to national security and the survival of each country” (Daniela Caglioti, 2011, n. . ). Likewise, Kaminer states that many electronic surveillance measures like facial recognition system flow in the same trajectory. As per the American Civil Liberties Union, Kaminer cites, the facial recognition system used by Police has never “identified even a single individual contained in the department’s database of photograph” (p. 398). This system has attained nothing other than near misses where many mistakes took place. A tendency was detected to change the function of these devices to invade the privacy of people.

According to ACLU, an example was observed in Britain where electronic surveillance become routine: “Camera operators tend to stare in the women skirts. In Michigan, Detroit Free press reports that “police used data base to stalk women and intimidate other citizens “(e. l. p. 398). Despite this, Kaminer states that many cities and airports “deploy the kind of system” that operates out of success to raise the security precautions and neglected the “precautions that might actually enhance security,” like checking personal belongings, (p. 98). She adds that with such rules, “law-abiding citizens” can become a target for these devices errors, (p. 398). Ultimately, Woodrow Wilson, US President (1913- 1921), said that the history of liberty is a history of resistance. The history of liberty is a history of limitations of government power, not the increase of it. I believe that the conflict between civil liberties and national securities is very old and the dilemma will never resolve without rationality and logic. 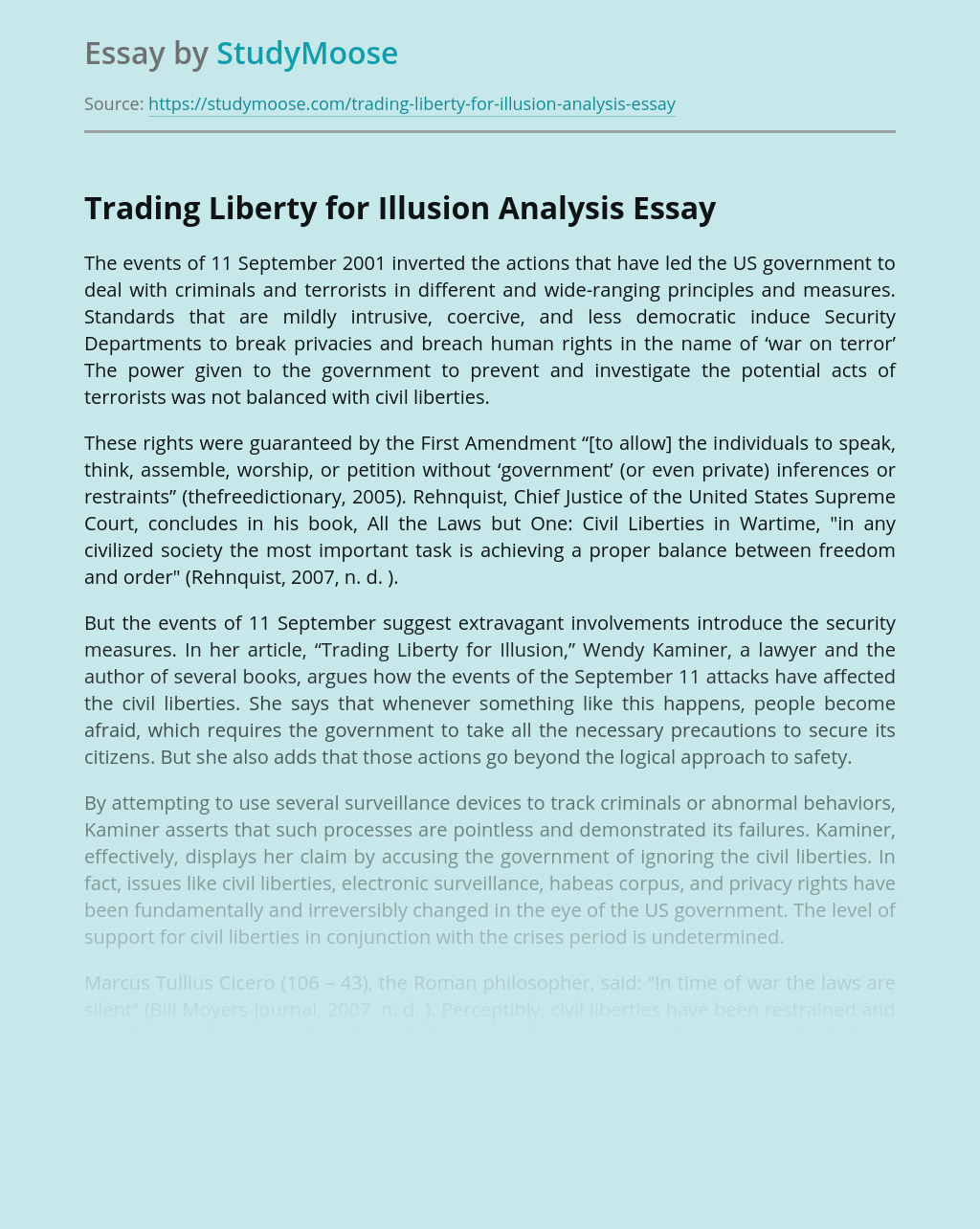 Turn in your highest-quality paper
Get a qualified writer to help you with
“ Trading Liberty for Illusion Analysis ”
Get high-quality paper
Helping students since 2015
Stay Safe, Stay Original