Trade unions (TU’s) have played a huge role in industrial relations by helping to manage the employment relationship, but since TU membership has been declining, their purpose is being questioned of whether they are still necessary within industrial society (Kelly and Heery, 1994). The aim of this essay is to argue why there is still a creditable purpose for TU’s in the 21st century. There will always be tensions between employees and employers, and if there is not a TU, who else is going to settle the inevitable conflicts inherent in any workplace? Blyton and Turnball (2004, pp.

Don't use plagiarized sources. Get your custom essay on
“ Trade unions serve ”
Get custom paper
NEW! smart matching with writer

35) state that there is an ‘unceasing power struggle between capital and labour and needs a representative of the parties to come to a compromise’. This indicates that unless conflicts completely cease, which is highly unlikely, TU’s will hold a purpose.

For the reason that there has been a substantial decrease in the number of TU members, this will be explained in the essay which will illustrate how the purpose of TU’s itself has changed.

The essay will highlight how industrial society has progressed in the UK and TU’s have had to adjust their role in industrial relations accordingly. It is now an era of post-modernism; where people want to live individualistically and this directly contrasts to the collectivism of TU’s, forcing them to modify their role (Hyman, 1975, pp.67).

What the TU role

To assess the argument, the essay is structured to begin by describing what the TU role, functions and industrial relations objectives were.

To understand the reasons for the decline in their membership, the factors that have changed the purpose of TU’s will be explained; most significantly globalisation and government power. The non-union workplace has emerged and is now a feature of contemporary industrial relations, which the advantages and disadvantages will be uncovered to see if employment relations manages without recognising a TU.

Conflicts such as pay continue to exist, even after the national minimum wage has been set, so this issue will be detailed showing how TU’s are still needed to help employees with this. The essay will then move on to show how the TU have attempted to defeat the decline in their membership and fight for their existence. This will allow the essay to conclude, resting the argument that TU’s do serve a purpose in the 21st century; there is still a sign of employees having collective needs as well as being individualistic people, and employers are not completely effective in dealing with these requirements.

The employment relationship is defined by Hyman (1975) as ‘the authorisation of day-to-day work relations that affect employees and employers’. This is an economic exchange, where employees demand wages while employers supply the wages and according to the theory of negotiation of order, there is nearly always a power struggle between the two. It is within this relationship a TU holds its purpose and operates to provide a formal basis where conflicts between the two parties can be managed (Blyton and Turnball, 2004).

TU’s first formed as independent organisations in 1868, from recognising that employees needed a representative body for promoting their rights and welfare to improve their working conditions placed by employers. The TU, fundamentally, allows employees to collectively exert control over their conditions of employment so employers do not overpower and exploit them (Hyman, 1975, pp.64).

There are many different unions, for example the casual workers union which is inclusive of many trades, but still represents collective needs of labour. The needs of labour are stressed as being collective because this symbolises the power of any TU. The first set of unions emerged in the 19th century; the craft union represented skilled workmen which was exclusive to members according to industry and sex. Soon more TU’s formed growing in size and status to become a huge British institution, and soon a Trade Union Congress (TUC) was affiliated to represent even member unions.

A TU performs several activities for their members in the service they offer: they negotiate between employees and employers when there is a difference of opinion on many matters. An example offered by Fernie and Metcalf (2005) shows a situation where there is an agreement that in return of an employee selling their labour, they will get their wages. However, a conflict arises in the employment relationship if this agreement is not clearly assigned, because an employee may be working as hard as they can to achieve the work set but the employer may expect more than is possible from the employee.

If a matter like this is not reconciled, another service the TU offer is to represent their member in an industrial tribunal. There are many issues that can potentially result in conflict such as pay, holiday entitlements, maternity leave etc, which the TU has a lot of information on. So if a TU member is unsure of something, they can turn to the TU for information and advice to ensure their working conditions are acceptable. In contemporary industrial society, TU’s now also offer financial services and education for its members. This is an effort to offer more personal packages in an era of individualism, and to broaden what they can offer as the nation also begin to demand more.

TU’s enforce their power through organising industrial action taken by employees against their employers, namely through strike activity. A strike is defined by Hyman (1989) as ‘a temporary stoppage of work by a group of employees in order to express a grievance or enforce a demand’. So if the TU efforts of negotiating do not work, employees’ grievances are expressed more viciously. Hyman (1989) also states that in the past, the number of strikes recorded was largely dominated by manufacturing industries.

This is an illustration of how TU’s main members were in this industry; the number of manufacturing workers in 1971 was 7,890,000 but in 2005, the number reduced to 3,184,000 due to the manufacturing shakeout. Parallel to this, the level of strike activity has reduced, since TU’s cannot consolidate its members to conduct such confrontations (Hyman, 1989, pp.22). This can also be explained by the reasons that there has been a TU membership decline. The essay now moves onto detail the shrinking manufacturing industry and other explanations for the decline in membership.

The main causes of TU’s becoming less popular are because of globalisation and government power, which have affected the labour market and how they operate, thus their overall purpose: Globalisation is defined by Stiglitz (2002, pp.9) as ‘the closer integration of the countries and peoples of the world’. This economic development means that world trade increases as trade barriers are removed, and when Britain joined the European Union (EU) in 1973 there was even more freedom for Britain to buy and sell across borders. An initial effect of globalisation for TU’s was that the manufacturing industries developed.

With increased technology from other countries, skilled manual workers were soon replaced by machines because of the higher productivity and quality of outputs which allowed British firms to be more competitive against foreign rivalry. It is cheaper to manufacture goods in third world countries so this industry moved out of Britain and into the cheaper countries, which resulted in the primary sector experiencing an economic downturn whilst the tertiary sector started to enlarge.

In the tertiary sector, more service firms formed that required a less skilled workforce so newer vacancies suited the conventional woman. An example is that the service firm Tesco employ more part-time workers to cover the evening opening hours as they begin to extend their services. This negatively affected TU’s because their membership had been concentrated with fulltime male skilled workers but there are few active male workers in the enlarged tertiary sector. This follows the facts of Bain and Elshiekh (1976) who found that changes in TU membership are closely linked with occupational compositions that differ with the changes in business and economic conditions. 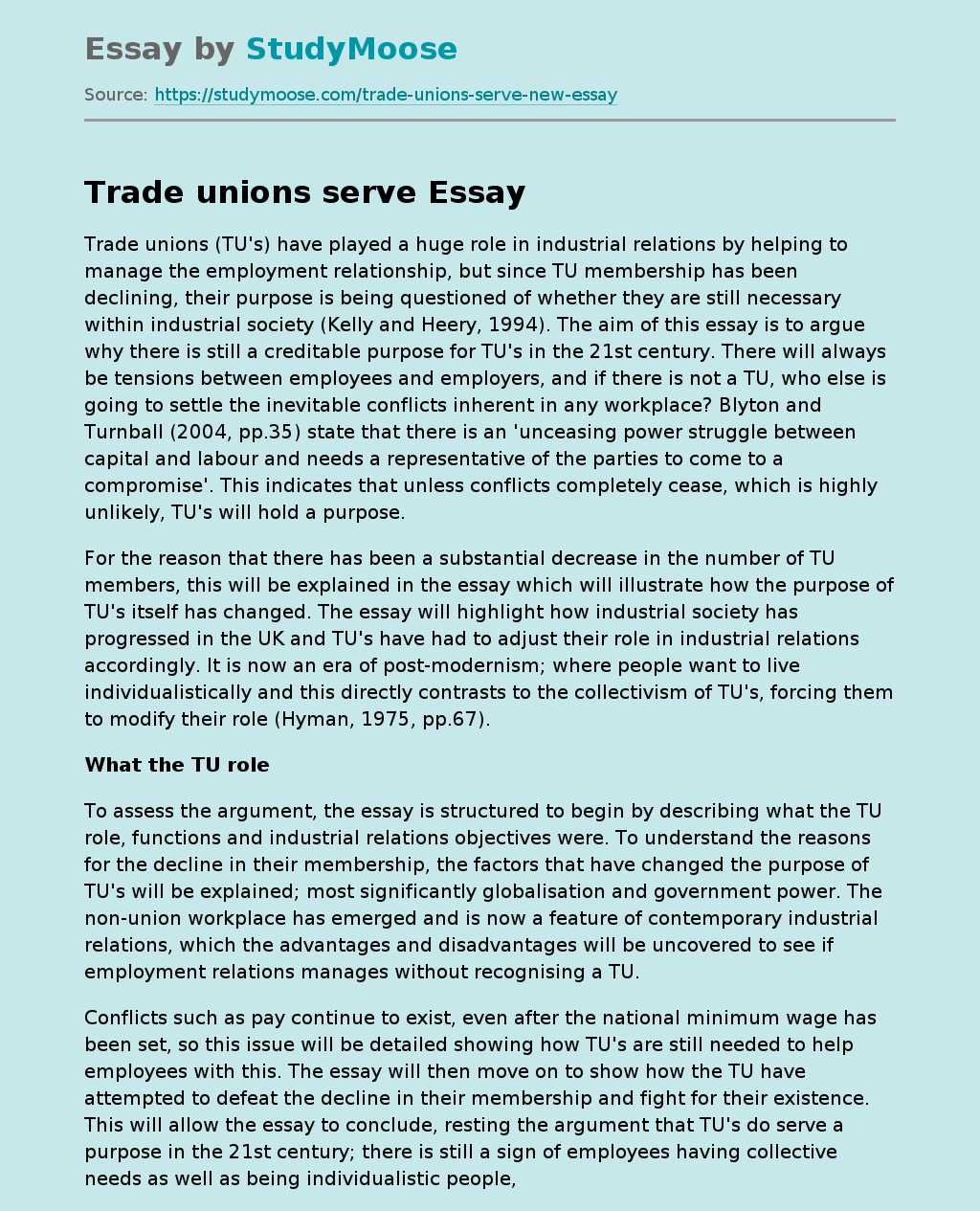