After the Second World War motor-car industry experienced the rise of the Japanese car makers to the level of global dominance. In recent years, notwithstanding the publicized problems of some companies such as Nissan, other Japanese car manufacturers, most notably Toyota, have corroborated and even intensified their global competitive advantage. This competitive advantage has evolved on the grounds of a corporate policy known as the Toyota Production System. The system relies to some extend on a HR management policy the goal of which is to stimulate employee creativity and loyalty but also on a highly effective network of suppliers and components producers.

Don't use plagiarized sources. Get your custom essay on
“ Toyota’s Business Strategies ”
Get custom paper
NEW! smart matching with writer

Toyota has succeeded in penetration into the US market and developed a global presence by high-quality of its productivity. Toyota’s philosophy of authorizing its workers is the essential principle of a HR management system that encourages creativity and innovation by involving employees to first-hand participation, and at the same time stimulates high levels of employee loyalty.

Although Honda and Nissan have gained a reputation for constructing high-quality cars, they have exhibited failure to vanquish Toyota’s advantages in human resource management, distribution systems in the extremely competitive US market and supplier networks.

Much of Toyota’s success in the global market can be credited straightforwardly to the synergistic implementation of its policies in human resources management and supply-chain networks.

Toyota’s first presidents, the actual creators of the Toyota Production System, designed a highly efficient production system later labeled as ’lean production’. Those methods were applied first by Henry Ford several decades earlier, later Toyoda followed them, however, Toyota’s approach to both distribution and product development proved to be much more market-driven and consumer-friendly.

Approach applied by Toyota Company to product development and production varied from those applied by other foreign manufacturers. In the first place, the Company made a strategic commitment from the outset to manufacture automobiles exclusively.

The next point was that the Company president believed the company would get better results if it selectively adopted practices and technologies from established car producers without being confined by the restrictions that direct technology transfer would have imposed on the company. In effect, Toyota adopted the best practices and concepts and then advanced what was required to satisfy customer demand. Customer satisfaction is the central point of Toyota’s strategic initiatives.

A number of specific factors underlie Toyota’s success and predominance over the competitors. These include a highly developed network of suppliers in Japan and, recently, in the US; a highly effective just-in-time (JIT) inventory system; a state-of-the-art assembly system that incorporates the latest robotic technology; an effective and efficient HR management system, the foundation of which is a high level of employee loyalty and commitment to quality.

The data about performance in terms of cars manufactured per year per employee at different  companies – car-makers, or each worker’s contribution to total revenue (as reflected in Figure 1), corroborates that Japanese car makers have assured an environment for their workers which enables them to be more productive. Shifting the focal point of analysis from net income to sales, for example, reveals more evidence of the effectiveness of the Toyota Production System in comparison to its competitor companies.

Concerning “advance,” Toyota persists investing effectively, without regard to such factors as currency exchange rate unsteadiness and corporate performance. The implementation of capital expenditures for operations around the world as well as prior investment in environmental and safety technologies, some the key drivers of sustainable growth, has been regarded as very essential.

Concerning “stability,” the Company maintained its steadfast financial base by providing sufficient liquidity and stable shareholders’ equity. A solid financial position is a prior condition to continue forward-looking investment even during abrupt unsteadiness in operating and market conditions. Furthermore, a steadfast financial position supports the high credit ratings that allow Toyota to access low-cost, stable financing. In previous years, the establishing of additional earnings opportunities through globalizing operations, investing in study and development and has required considerable amounts of capital. Consequently, while total assets have increased from around ¥16 trillion in 2000 to roughly ¥24 trillion in 2005, total liquidity has kept stable. However, Toyota’s relative cash levels have virtually decreased.

The best evidence for the efficiency of Toyota’s business strategy is its financial statement for fiscal 2005 year.

“In fiscal 2005, ended March 31, 2005, Toyota posted record results across the board, with increases of 7.3% in consolidated net revenues, to ¥18.55 trillion; 0.3% in operating income, to ¥1.67 trillion; and 0.8% in net income, to ¥1.17 trillion. Among those results, operating income remained at the previous fiscal year’s high level, absorbing such income-reducing factors as ¥140.0 billion for the effect of currency exchange rate changes and a ¥59.8 billion decrease in net gains on the transfer of the substitutional portion of the employee pension funds to the government. Further, net income was above ¥1 trillion for the second consecutive year.” (http://www.toyota.co.jp/en/ir/library/annual/2005/executive/index.html).

Toyota adopted a principle that a workplace with high job satisfaction is more probable to produce high-quality, reliable, products at affordable prices. Both Toyota and Honda have implemented a number of successful workforce practices. However, Toyota, unlike Honda, has done so not only in its own plants but also in supplier plants, that were experiencing troubles. In this way the Toyota Production System overcomes both physical and cultural hurdles; it works successfully in other countries and cultures.

The real critics of a product and the policy system that produced it are its consumers. The other two the most influential factors for consumer choices are affordability and quality. The latest data from consumer reports reveals how the large three American car makers have relinquished market share to foreign brands. The American producer’s share of the market has reduced below 60 per cent; the dominating position is held by Toyota, Honda, Nissan and Volkswagen that cover the rest 40 per cent. Obviously, other car manufacturers have to reconsider their approach to the philosophy of production, supply chain management and human resource management. 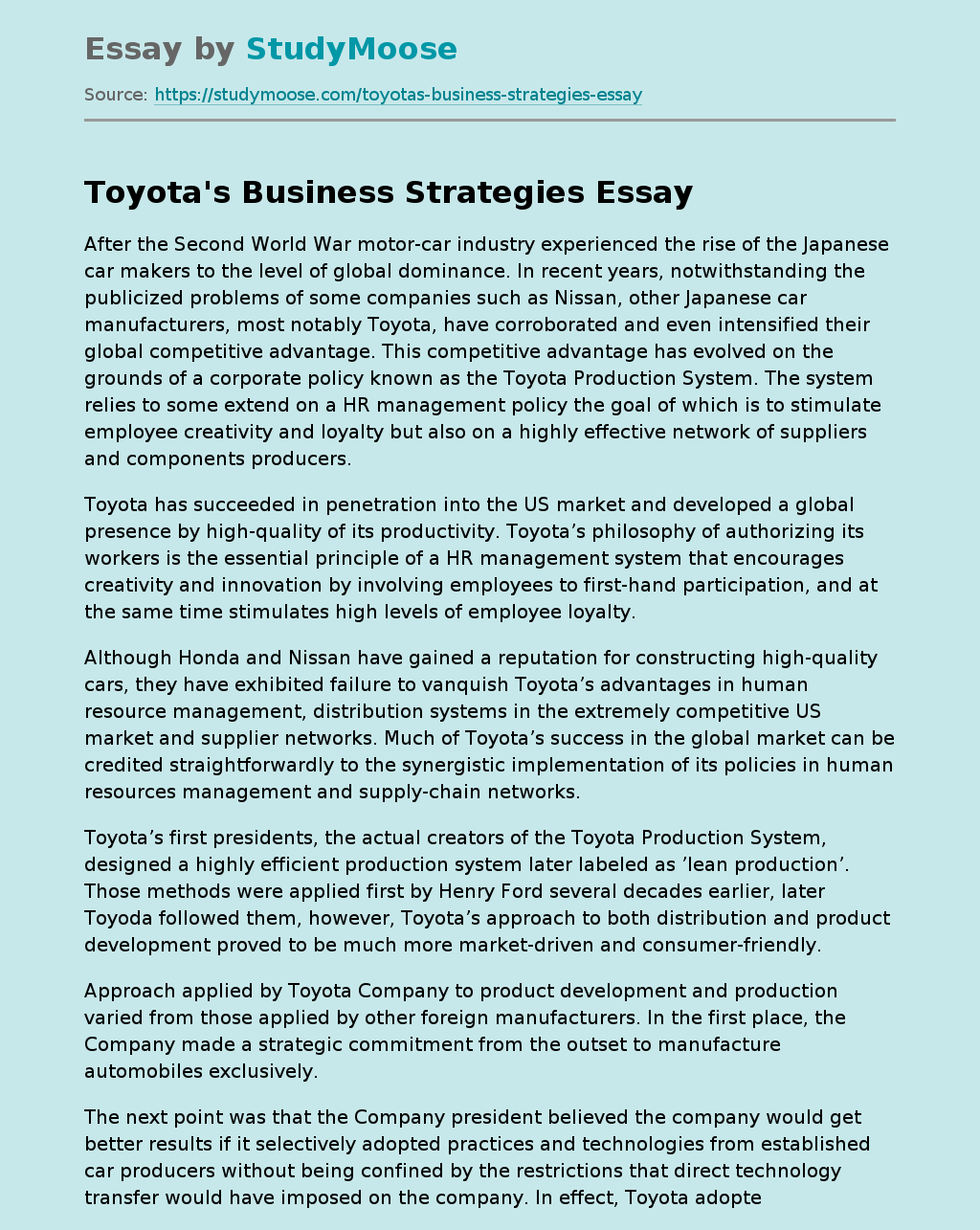