Fort Santiago is part of the walled city in Manila called Intramuros. José Rizal, our national hero, was imprisoned in the fort before his execution in 1896. But who would have thought that every piece of these Hispanic stones witnessed one great event in the Philippine history. Now, let’s walk into one of the oldest Hispanic stone fortress in the country… It was built in 1571, on the site of the native settlement of Raja Soliman.

Don't use plagiarized sources.
Get Your Custom Essay on Tour in Historical Place Fort Santiago Just from $13,9/Page

First Fort was a palisaded structure of logs and earth. It was destroyed by many calamities but then repaired and strengthen from 1658 to 1663. By 1762 to 1764 it became the headquarters of the British occupation army. It was occupied by the Japanese military in 1942 where hundreds of civilians and guerillas were imprisoned, tortured and executed but then destroyed in the Battle of Manila in 1945.

In 1946, it was used as depot of the U.S. Transportation Corps before turnover to the Philippine Government.

It was declared Shrine of freedom in 1950. The restoration and maintenance of the fort began in 1951 under the National Parks Development Committee. The management was turned over to the Intramuros Administration in 1992. Fort Santiago, the 16th century military defense structure, stands witness to the valor and heroism of the Filipino through the centuries. The park houses well-preserved legacies from the Spanish Colonial Period including Jose Rizal memorabilia at the Rizal Shrine. Now it’s our turn to witness these historical events…

Threats of invasion by Chinese, Japanese, Dutch and Portuguese pirates prompted the construction of defenses consisting of high stones walls, bulwarks and moats. It was built in 1663 but now houses the Intramuros Visitor Center providing information for visitors and historical video of Intramuros and exhibit chambers. Most of the archaeological materials recovered were intact and fragmented ceramics that include earthware, stoneware, porcelain ware, bricks and tiles.

SHRINE OF OUR LADY OF GUADALUPE

It’s a quaint chapel in the Reducto de San Francisco Javier, constructed in 1773.

This is where Dr. Jose Rizal was confined during his trial for sedition. It houses a museum where mementos of the hero can be viewed.

It was during his final days in Fort Santiago, that he penned his final poem, one that will be remembered forever. It was untitled originally but is now commonly known as Mi Ultimo Adios , My Ultimate Goodbye.

Built in the 16th century, now houses the Rizaliana Furniture Exhibit. It offers tourists a view of the colonial period stronghold.

The Royal Storehouses, used by colonial military forces during the Spanish, Americal and Japanese occupation. 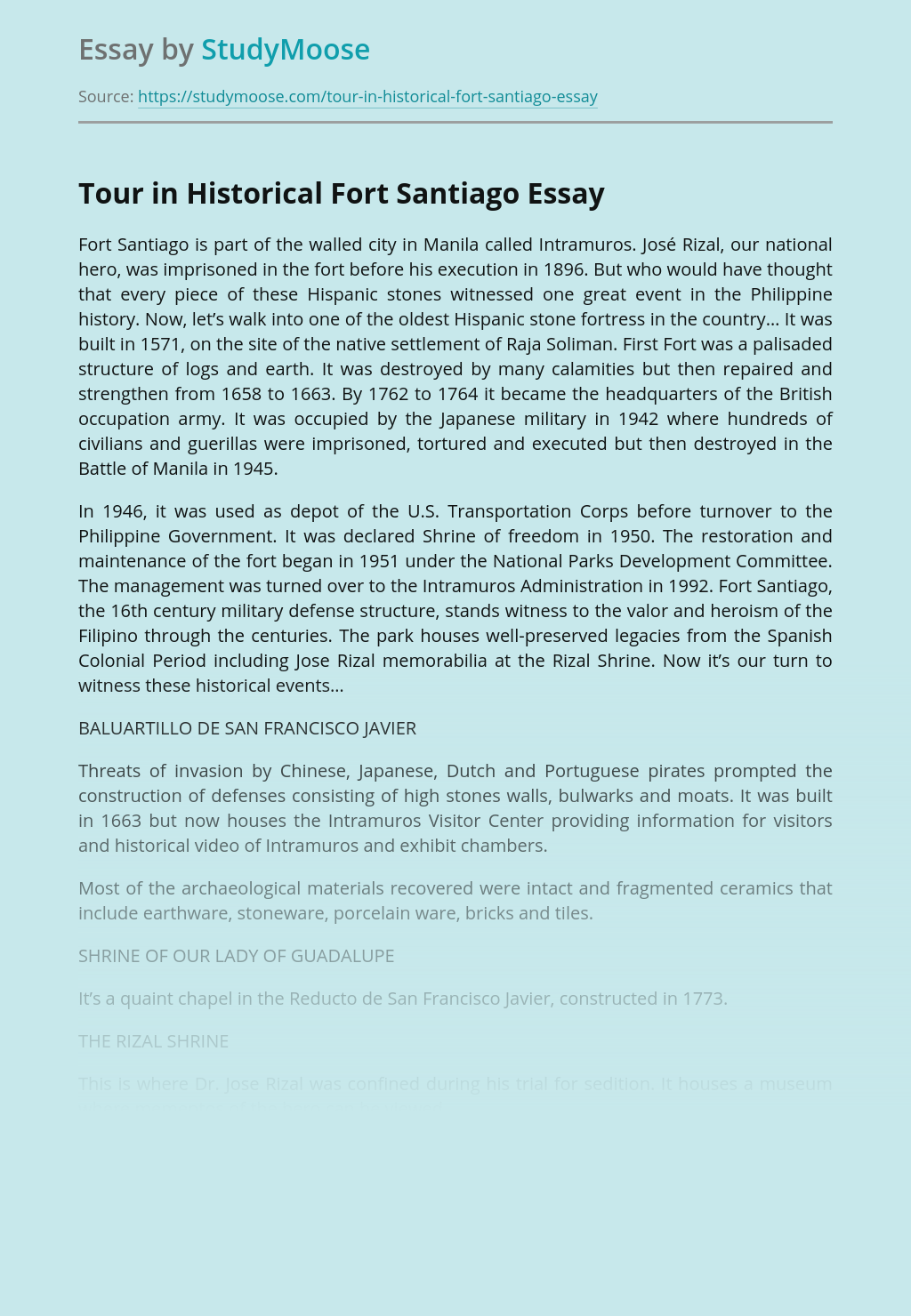 Rate this post A pediatric nurse must use the proper upkeep care to a child. Depending upon the specific pediatrics office or environment that they work, the majority of precisely define the functions that they are to presume. In pediatrics nursing, the nurse is accountable for the developmental screenings. Part of this element consists of...

All Primary and Secondary Education Should Be Free

Rate this post If the process of plate tectonics were to completely stop then the ability of the Earth to create mountains through the collisions of two different plates would stop as well. This would mean that erosion would eventually abrade these mountains and the amount of sediment created by this activity would eventually reach...

Rate this post Twenty-first century detective stories are blooming with action, conflict, mystery and so on. But this is only recent development. There is a lot more to it than most people think. From a French man named Vidocq to the creation of modern detective fiction by Edgar Allan Poe, until today’s development of detective...

Rate this post The commencement of E-Trading and Demat has transformed the capital market in India. With the help of Demat and Trading account, buying and selling of shares has become a much faster and even process than trading with the assistance of a physical broker. It provides for the assimilation of bank, broker, stock...