Tottenham Hotspur Football Club is an English football club that founded in 1882 and located in Tottenham, London. Tottenham has been playing in the English Premier League and was one of the oldest teams ever played in the Premiership. Tottenham was the first English football club to achieve the League and FA Cub Double by winning the competitions in the 1960-61 season. Tottenham’s history shows a successful career with the trophies for the past six decades. Tottenham own a home stadium called White Hart Lane with capacity 36,500 audiences.

Turn in your highest-quality paper
Get a qualified writer to help you with
“ Tottenham Hotspur Football Club ”
Get high-quality paper
NEW! AI matching with writer

In 2008, Daniel Levy, chairman of Tottenham Hotspur Football Club is considering some possibilities to bring his football club to the upper rank of the British Premier League. Achieving this goal requires Levy to consider about two things: First is building a new stadium and improving the team’s quality by building a new practice facility or training ground.

Following other competitors such as Arsenal, Manchester United, and Chelsea that being able to get some added revenues and gain a competitive advantage in the player acquisition market provided by developing a new stadium.

Levy as a chairman of Tottenham Hotspur football club who understands the dynamics of football clubs and ran the club to endure financial stability and longevity focused on three pillars that he felt could help establish a foundation of consistent, long run success:

The club already had an agreement to build the new training ground just outside the London.

The club viewed the training ground as also crucial to the third pillar, which was to continually improve the quality of team. Having a state-of-the-art training ground was a major selling point in recruiting new players, both young players whom they hoped to develop, as well as star players from other clubs or countries whom they hoped to acquire. For this case, 3 alternatives have been analyzed using DCF financial analysis. Those alternatives can be seen below:

This assumption has been made in the estimation of cash flow where interest payment is not included. Net capital spending (NCS) is gotten by maintenance capital expenditure. Workin capital is based on the difference between current asset minus cash and equivalents and then minus with current liabilities. In this calculation, we assumed that working capital is proportional to Revenue growth of 9%, except in the last year’s prediction (2020) the growth become 4%.

The Net Present Value for Tottenham is showed to be at £184.93. The positive of this NPV suggest that the shareholder can decide to keep the current operation. Chart below shows the NPV and the comparison with other key measures.

The performance charts below show the rank and position of Tottenham compared to other premier league’s football clubs.

The Enterprise Value (EV) has been used as a reference value to rank the teams. EV is usually used to compare other companies with varying levels of debt. However, enterprise value by itself is not a exact indication of the company’s financial position because the EV can be created by large quote of Debt. A more accurate analysis would have required comparing the same data during a certain period of time. With the nature of scale of measure that’s being used to plot the data, the different metrics has been divided in different charts. The large difference that occurred making us to easily divide them into two different groups. The first group that can be characterized by medium to high EV, Net debt and revenue over £100M are from Manchester to Liverpool.

The second group includes Tottenham, with medium low Net debt and Revenue below £100M. Tottenham seems having a healthy financial in comparison. The value of Revenues is far ahead compared to the value of the Net Debt with positive operating incomes. The operating profit margin’s percent looks healthier than other teams in same group. The EV to Revenue shows how Tottenham’s revenue is being valued by the market. Because revenue is not affected by the interest income/expense line item, the suitable value comparison should also remove the effects of capitalization, as EV does. The EV/Revenues of 2.08 seems in line with the performances in the same group. EV to EBIT shows that the market has valued Tottenham at 31.20 for its operational result. The ratio becomes the highest in its group. Tottenham also shows that good operation against its revenue in relation to the average net goal. The team seems really good at taking good advantages of their goal-scorers.

For the rights to a goal scorer of the caliber that Tottenham had in mind, the club need to pay a transfer fee around £20M. The club also anticipated negotiating a 10-year contract that would pay the player £50,000 per week for the 2008 season with scheduled increases of 10 % each year. Tottenham expects to increase its number of goals per season by 12. It will effect to increased ranking which will increase the revenue. £132.32 NPV shows that this decision will be really agreed by the shareholders. Adding the new player we can see that the NPV increased around £12.15M. 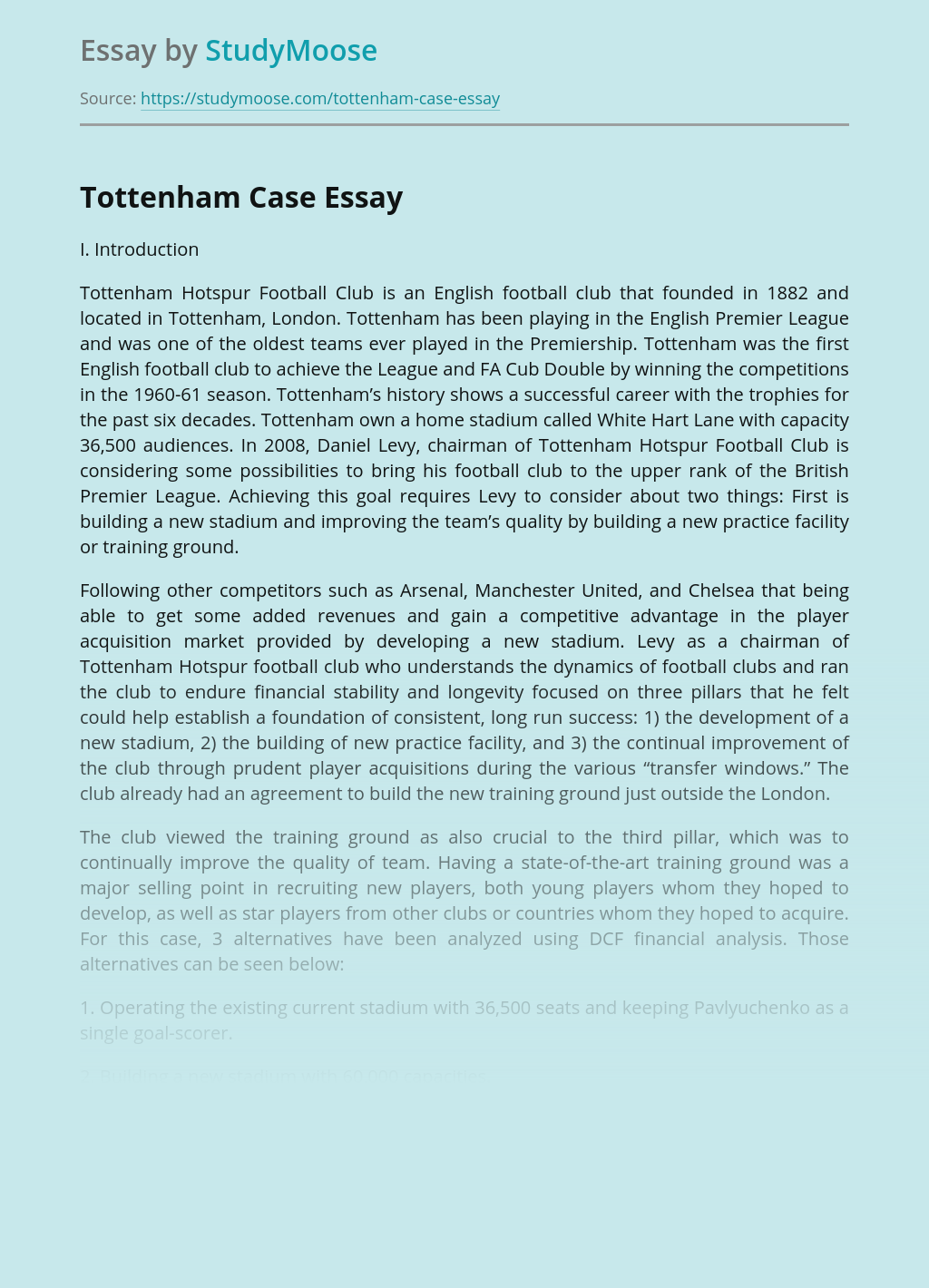 Turn in your highest-quality paper
Get a qualified writer to help you with
“ Tottenham Hotspur Football Club ”
Get high-quality paper
Helping students since 2015
Stay Safe, Stay Original