Cabrera earned his degree in Medicine at the University of the Philippines in 1945. He then decided to continue his education at Tulane University in New Orleans, Louisiana, USA, where he garnered his Master’s Degree in Public Health, major in Medical Parasitology and Public Health.

He graduated in 1950. Focusing on his major, Dr. Cabrera published more than a hundred scientific studies concerning medical parasitology and public health. He also developed innovations in drug treatments against diseases caused by mosquitoes and agricultural soil.

Don't use plagiarized sources. Get your custom essay on
“ Top 10 Filipino Scientist ”
Get custom paper
NEW! smart matching with writer

In 1961, together with Lee M. Howard, he made the first field study of simian malaria in the Philippines, and found that malaria occurred in 8.6 percent of the animals tested. Although the study was very limited, the report suggested that the simian reservoir of malaria is probably of limited significance for the human population in the Philippines.

For his work on filariasis, Dr. Cabrera received the Philippine Legion of Honor, a Presidential Award in 1996. With the elucidation of the epidemiology and life cycles of filarial parasites, preventive measures in the form of drug treatment of human cases as well as measures against the mosquito vectors can be implemented.

Dr. Cabrera also worked on the control of ascariasis. With the model he proposed, hazards produced by these soil-transmitted helminths can be reduced.Cabrera earned his degree in Medicine at the University of the Philippines in 1945. He then decided to continue his education at Tulane University in New Orleans, Louisiana, USA, where he garnered his Master’s Degree in Public Health, major in Medical Parasitology and Public Health. He graduated in 1950. Clara Y. Lim-sylianco

Dr. Clara Y Lim-Sylianco is a Filipino chemist, who has written several notable books and is renowned for her research into mutagens, anti-mutagens and other reactions related to bio-organic issues. Her research was primarily focused around the chemicals found in fruits and vegetables. Her findings led to the popularization of the ‘Coconut Oil’ diet. Dr Lim-Sylianco has written more than 50 scientific articles, 7 books and 5 monographs. Her books continue to be prominently used as textbooks for collegechemistry courses across the world in the modern day.

He won First Prize in the Manila Medical Society study competition the next decade he became the beneficiary of the Ten Outstanding Young Men (TONYM) award for Science in 1975; the President Manuel A. Roxas Medallion for science, and First Prizes in the PMA-Abbot award 2nd the NSDB Researcher of the Year. In 1981, Dr. Kintanar acknowledged the UP Alumni Association Professional Achievement honor in science. He also received the Burke Award for distinction in cardiovascular medicine and the Republic Heritage Award in year 1960’s.

Dr. Fronda worked extensively on the Cantonese, a breed of chicken imported from Canton, China. For 15 years, he culled, selected and bred the Cantonese to improve the breed. He succeeded in developing the chickens, but the line was not continued since all the fowls were consumed due to famine during World War II. Aside from that, Dr. Fronda was also the first Filipino researcher to work on improving duck meat. These ducks were often referred to as “Fronducks,” in recognition of his success in breeding them and in producing stocks.

He is the author of a textbook in Poultry Science Production for students in agriculture and also co-authored a series of books for primary and secondary students, entitled the Let Us Raise Series. He also produced around 500 articles on the poultry and livestock industry. Dr. Fronda received numerous accolades for his work, such as the Distinguished Service Medal and Diploma of Honor from the President of the Republic of the Philippines; the citation as “The Father of Poultry Industry in the Philippines” by the Philippine Association of Animal Science; the degree of “Doctor of Science” honoris causa; and the “Father of Thai Poultry Industry” by the Kasetsart University, Bangkok, presented by the Princess of Thailand in 1982. In 1983 he was conferred as a National Scientist by Former President Ferdinand Marcos

Clare R. Baltazar (born November 1, 1927) is a foremost Filipino entomologist. She is the author of Philippine Insects, the first authoritative text on Philippine insects. Dr. Clare Baltazar has done numerous studies on insects, particularly on Philippine-endemic Hymenoptera species, which proved important for biological insect control in the country. She also discovered 8 genera and 1 subgenus of Hymenoptera, and 108 species of Philippine parasitic wasps. She received in 1980 the Rizal Patria Award in entomology. In 2001 she was conferred as a National Scientist by Former President Joseph

Dr. Ramirez is recognized for her researches in biochemical genetics and cytogenetics. She has been working on the genetic systems controlling the makapuno endosperm of coconut; the genetics of chemical resistance factors against Cercospora kex leaf spot; and the cytogenetics of the hybrids of rice with related wild species. Dr.Ramirez was holder of the SEARCA Professorial Chair for Genetics (1974-76), and recipient of the Gregorio Y. Zara award in basic research (1976), Rizal Pro Patria award for outstanding achievement in science (biochemical genetics) (1981), and UP Professorial achievement award in agriculture (1985). ————————————————-

For her paper on the Morphology and Anatomy Rauvofia vomitoria Afz., Dr. Cantoria received the Edwin Leigh Newcomb Award pharmacognosy given by the American Foundation for Pharmaceutical Education in 1954, and again in 1962 (with Edward S. Mika) on the growth and development of Datura starmonium L.. She is also the recipient of Phi Sigma Awards for marked distinction in Biology in 1951, and Most Outstanding Phi Sigman in 1977. ————————————————-

Dr. Pedro B. Escuro (born August 2, 1923) is a foremost Filipino rice breeder. After his doctorate Escuro then proceeded to culture the “best” rice variety he had in mind. He succeeded in this, and under his leadership improved Philippine rice varieties were produced, among them are C4-63, C4-137, C4-113, C-168, C22, UPL-Ri-5, PSB Rc 16, PSB RC 36), as well as three improved wheat varieties (Trigo 1, Trigo 2, Trigo 3). The “C” varieties were widely adopted in the Philippines, Malaysia, Vietnam, Southern India, and other Southeast Asian countries. Not only the varieties are resistant to pests and other harmful conditions, they also proved to be sound investments, as they returned profit 250-fold.

For his achievements in agriculture Dr. Escuro received 18 honors and awards. These include two Presidential awards, Presidential Plaque of Merit for outstanding accomplishments in rice improvement (1967) and the Rizal Pro Patria award for outstanding contribution to rice breeding and genetics. He is also recipient of the University of the Philippines Distinguished Professional award in agriculture (1973) and D.Sc. (honoris causa 1974), and the 1974 Ayala award in agricultural science. And finally, he was conferred as a National Scientist in 1994 by Former President Fidel Ramos. ————————————————-

Veronica F. Chan is an academician and a pioneer in Philippine virology and immunology. She is credited as one of the researchers that first isolated the dengue viruses types 3 and 4 as a cause of hemorrhagic fever. Chan is the founding and first Dean of the Graduate School for Health Sciences of UPM in 1994. In 1995, she instituted Distance Learning in the College of Public Health for MPH and MHA degree programs, UP Manila. She has worked on dengue antigens, anti rubella antigens and flavivirus antigens.

Chan has studied the polio virus, measles and other contagious diseases and infections. She is also responsible for year round monitoring of the influenza virus in the country. Chan has also served as adviser to then Department of Health Secretary Juan Flavier. Her work includes several research papers and publications relating to public health and microbiology. She is has a membership to the editorial board of various international public health publications and journals. 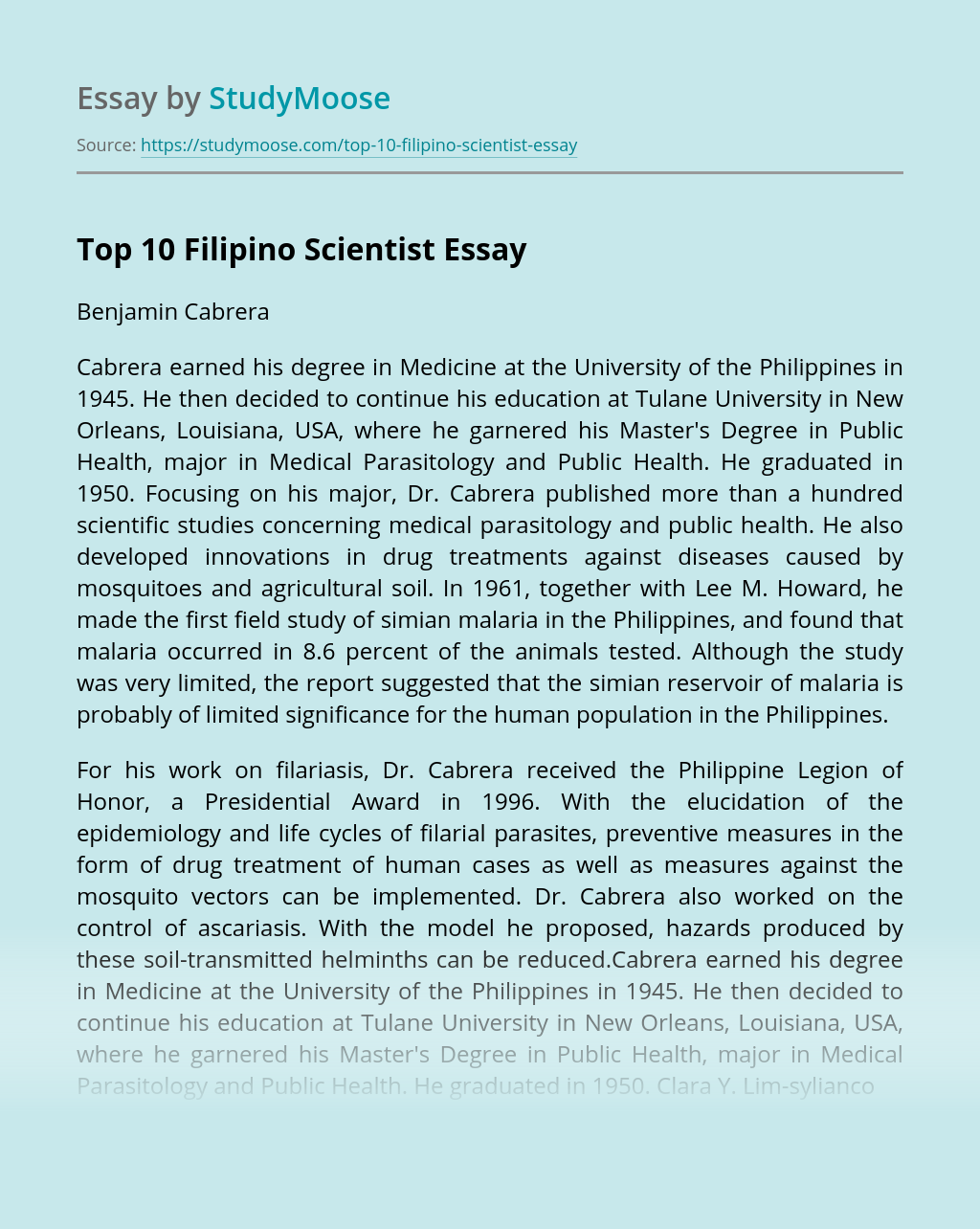