Too Much Too Young

The night had begun quite normally for us: in a pub. I’d just turned thirteen and had been living with Mum and her boyfriend Dave Wheat in London’s East End for a couple of months. She’d been out all day ‘kiting’. She’d taken orders from friends and neighbours, then gone to different shops using stolen credit cards to buy $50 to $100 worth of stuff in each one. Afterwards she’d sell everything on at half the price. While she ‘worked’, Dave would wait for her with a drink in a pub nearby.

Don't use plagiarized sources. Get your custom essay on
“ Too Much Too Young ”
Get custom paper
NEW! smart matching with writer

They’d had a good day and we’d gone to the Three Rabbits to round it off with their friend Barbara, who was a heroin addict at the time, her redhead husband Micky and their eight-year-old daughter Sharon. The Three Rabbits was a smoky old-fashioned pub on the Romford Road, in the heart of London’s East End. In those days it was a real gangster haunt, where men carried guns or knives in their leather jackets and weren’t afraid to use them.

There were worn stools by the long wooden bar, a patterned carpet that had seen better days, tables covered in glass stains, beer mats and overflowing ashtrays, and two pool tables. Seeing the film Moulin Rouge when I was older reminded me of what it was like, because the guys who drank there were all such weird characters. There was the midget; the one who kept passing out; the one who was a bit of a lunatic; the funny one; the psycho – all of them dangerous to know.

After a couple of hours’ drinking, a fight kicked off between Barbara and Micky. Being close to a fight was like a drug to Dave when he was pissed. He drank every day, and would be fine for days on end until suddenly, for no obvious reason, he’d snap and want to start in on one himself. Read about the language of oppression in The Handmaid’s Tale

Dave had always scared me. All he needed to do was give me one of his looks and it would stop me dead whatever I was doing. Although we’d had plenty of good times together, I’d seen what he was capable of. I knew that he was a gangster who’d been inside more than once, and in that summer of 1993 he was on parole from Parkhurst. I also knew his reputation and I didn’t like it – Dave wasn’t a man to mess with. I’d heard that when he was in America, he’d taken a woman back to his room only to discover ‘she’ was really a man, so he’d shot him dead on the spot. I’d also been told how he’d hung a guy who’d crossed him off a roof by his ankles. I didn’t want that happening to me.

That night he reminded me of Freddy Krueger, the killer from A Nightmare on Elm Street, thanks to what I called his ‘Krueger hat’. Underneath it he was a tall good-looking bloke in a black leather jacket; he was slim with a black Mexican moustache, long black hair and a lazy right eye. When we left the pub, we climbed into his red Cortina to go home. I shrunk down in the back seat listening as Mum and Dave started shouting at each other. As he drove off in the dark, Dave started punching Mum in the face with his fist – I could see she was bruised and bleeding in the orange light of the street lamps as we passed beneath them. I screamed at him to stop, but I knew he’d hurt me if I tried to get between them. Suddenly she yelled at me to get out of the car, so as he slowed down at some traffic lights I opened the door and got ready to jump.

Too Much Too Young. (2020, Jun 02). Retrieved from http://studymoose.com/too-much-too-young-new-essay 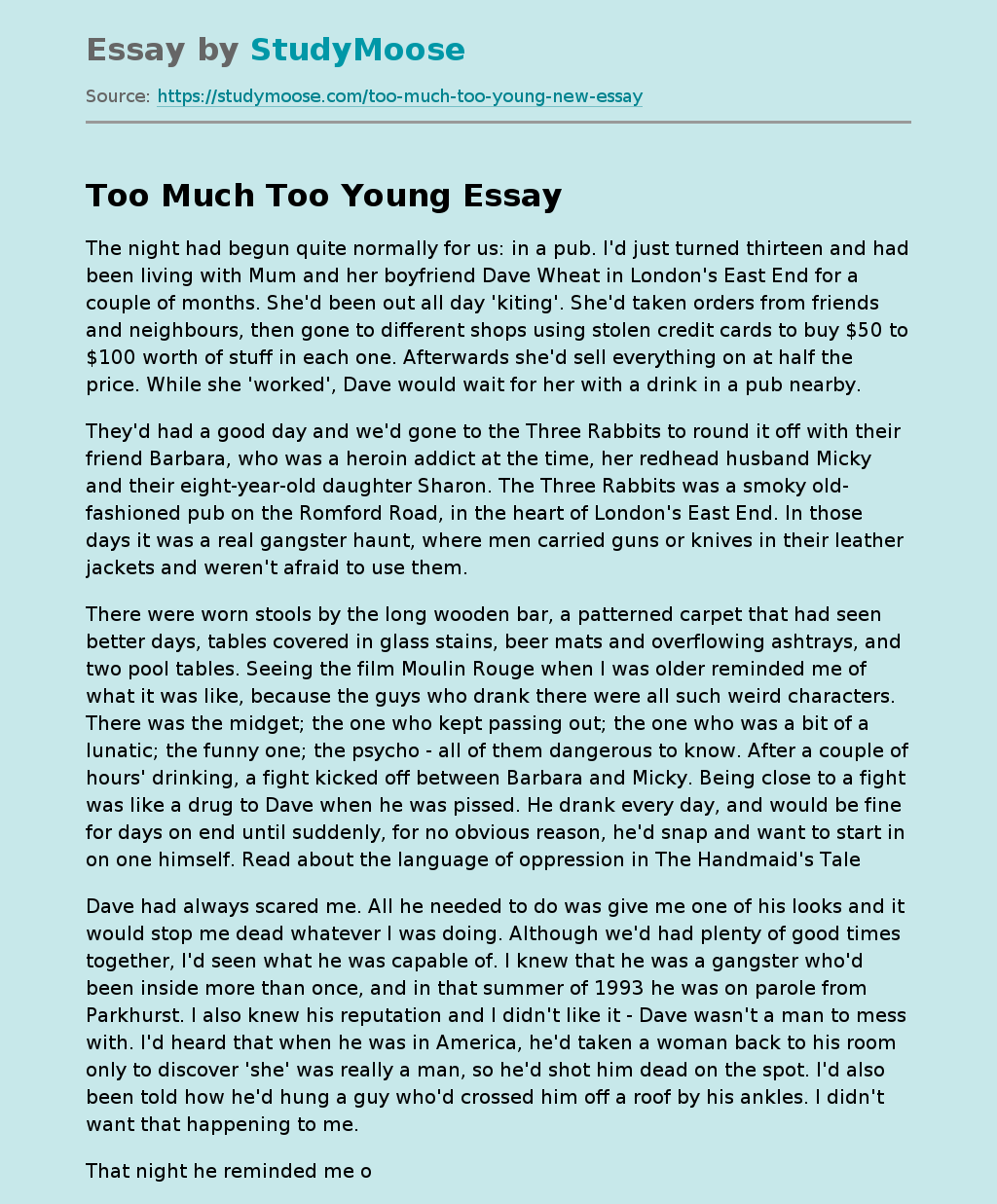