Tom Buchanan in the Great Gatsby

Through Nick Carraways choice of dictation and detail, he conveys Tom Buchanan as a power-craving, dominant man. Tom is described as having various physical accomplishments, including: being one of the most powerful ends that ever played footballsturdyaggressivedominantand a body capable of enormous leverage-a cruel body. Not to mention, Toms family was extremely wealthy-which carried into his generation-and is considered a very powerful man. Despite these references to Toms strength, physically and economically, Nicks word choice depicts him as the complete opposite.

Don't use plagiarized sources. Get your custom essay on
“ Tom Buchanan in the Great Gatsby ”
Get custom paper
NEW! smart matching with writer

When Nick sees Tom standing on the porch, he illustrates him as having a supercilious mannerarrogant eyesleaning aggressively forwardand an impression of fractiousness. All of these descriptions support the fact that Tom is actually a very weak and fake man.

His supercilious mannerisms and arrogant eyes make him seem cocky and self-important, to the point of his unawareness toward how powerless he really is. Also, when he has his legs apart on the front porch, leans forward aggressively and conveys an impression of fractiousness, it is implied that he is purposely over compensating the degree, or necessity, of power he feels he should express in order to make him think that other people believe he is unquestionably powerful.

The overall purpose of characterizing Tom-in the way he did-was to exemplify how much he is the ideal man. This constant judging and belittlement of the people around him makes him feel superior-and gives him a feeling of excellence over everyone, inclusively convincing himself that he is truly the ideal man.

Tom Buchanan in the Great Gatsby. (2016, Jul 06). Retrieved from https://studymoose.com/tom-buchanan-in-the-great-gatsby-essay?post 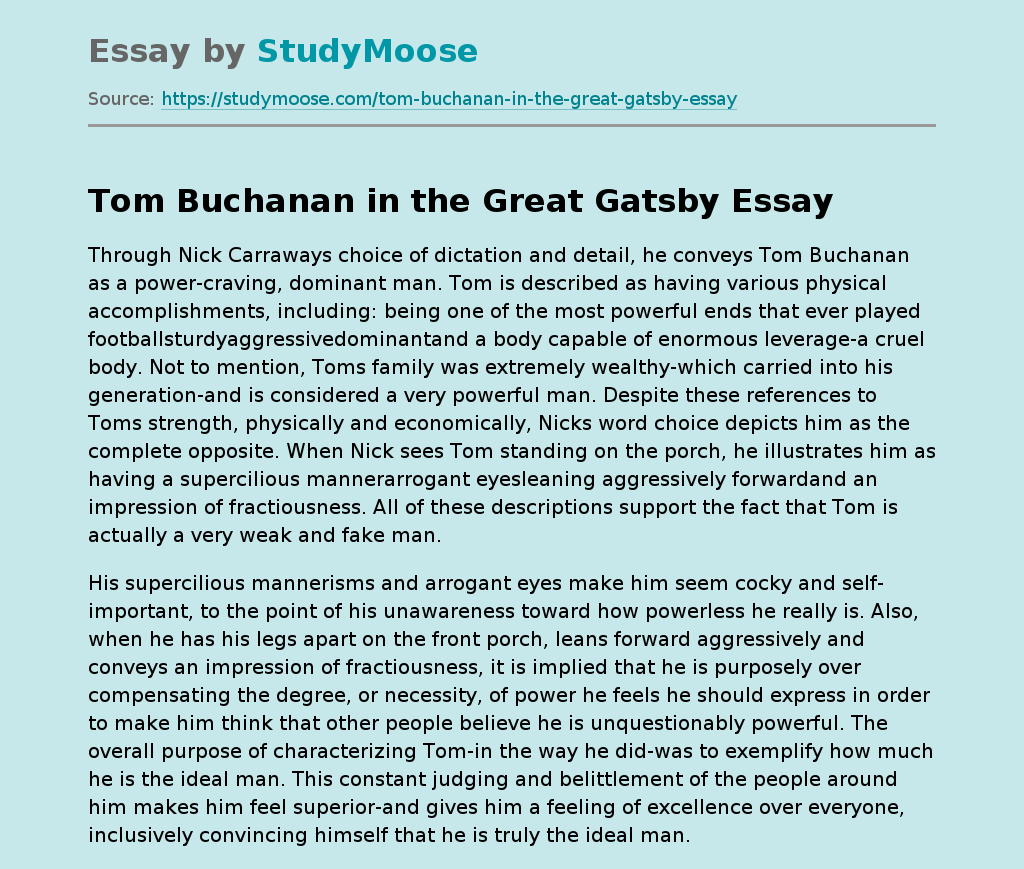