Toddlers and Tiaras affects childrens’ self-esteem around the world who believe that they have to live up to this “beauty” that is enforced by their Mom’s and they have to be as pretty and perfect as these other kids who they see in beauty pageants.

I cannot find it in me to support little girls judged this way. Beauty? Talent? Making them stand onstage in front of a crowd of people where one girl’s dream comes true and the others are crushed? This cannot be good for their self-esteem and with children that young, they never really know what could end leaving an emotional scar.

Don't use plagiarized sources. Get your custom essay on
“ Toddlers and Tiaras: Child Abuse? ”
Get custom paper
NEW! smart matching with writer

Today there are more than 250,000 children who compete in pageants and 100,000 of those children being under the age of thirteen. At a young age you are influenced by things you see, people around you, and tend to have role models who are older. Some children also strive to fit in with others and want to be cool by looking just like these kids in beauty pageants. Toddlers and Tiara’s effects children’s self-esteem by showing kids being enhanced cosmetically to win pageants at a young age.

The little girls (or sometimes boys) participating in these pageants seem to be interested into it. Majority of them say that they love pageants and that pageants make them feel special until they get spray tans (which are super cold), Hair Extentions (pull onto your hair), lots of hairspray, tons of make-up to the point where they look 20, fake acrylic nails, fake eyelashes extentions and a super expensive outfit for their pageant they they must win and they kids start crying because they’re tired.

What happened to natural beauty? Think of the messages that these kids are getting from their Mom and Dad’s: “The only thing that matters is winning first place.” “Being beautiful is the most important thing.” Toddlers and Tiaras put Mothers in a very negative spot light and they show no sympathy for their daughters majority of the time. This one episode, the parents are acting like children, and the children are acting like parents.

This behavior toward both mother and child is sad because this is the real world of beauty pageants. American Psychological Association did a study of children who had the same mentality of the children in “Toddlers and Tiaras” Which they stated: “we linked a premature emphasis on appearance with “three of the most common mental health problems of girls and women: eating disorders, low self-esteem, and depression.” Which these beauty pageants will cause long-term effects on little girls who I’m sure believe that their Mom thinks there’s something wrong with their teeth if they’re making their own daughter wear fake teeth and forcing them to be perfect and living vicariously through their daughter. This is not a way for children to live their childhood just based on beauty competitions and to just go from diapers to tiaras.

Often emotional abuse can do far worse damage than physical, and I strongly believe that some of this beauty pageant hinges on that mentally and will take a toll on them in ten to twenty years from now. I believe that these mothers are living vicariously through their daughters because their hoping that their girls will get the attention they didn’t get in their own lives. The moms try to cure their poor self-esteem by making up and dressing their young girls in inappropriate of expensive outfits.

They put make-up on their daughters, without realizing that they are, in effect, pimping out their own child. Many critics and viewers see this show as controversial for its “sexualization” of young children. Most pageant moms dress their children huge sparkly dresses or a outfit that can be seen as nothing but innocent. Controversy arose when a pageant Mom dressed her three year old in a prostitute costume, she argued that it was nothing but a comedic costume based off of Julia Robert’s film, “Pretty Woman”. Another Toddler, Four year old Destiny was also in a pageant as Sandy from the movie “Grease” in a leather jacket and a prop cigarette.

Beauty Pageants are harmful to society and kids growing up today in the modern world and should have a normal childhood instead of getting their eyebrows waxed. I believe a solution for this is to raise the age for beauty pageants for teens and up only instead of toddler beauty pageants. 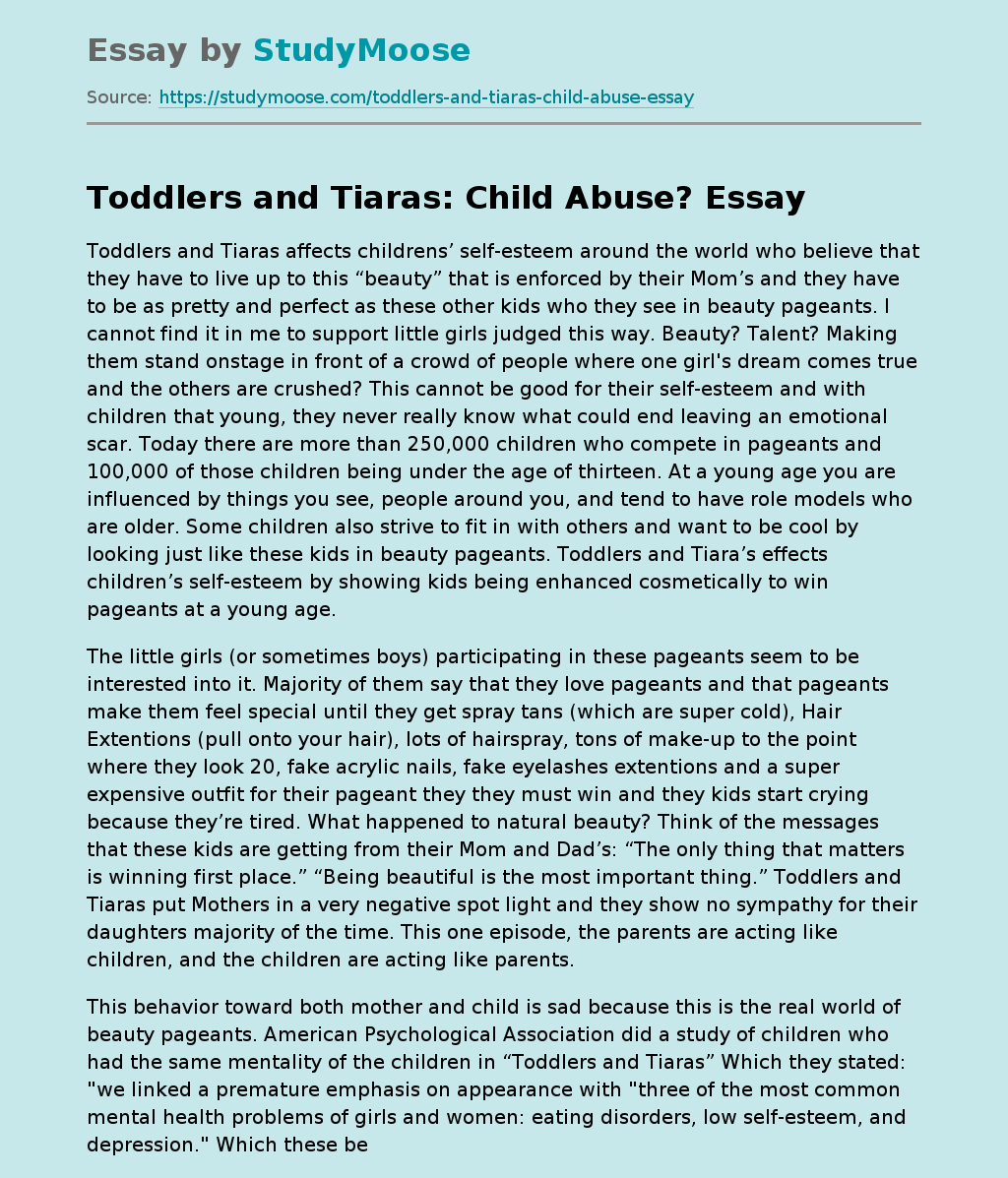