Today cellphone plays a vital role in ones life, because use of a cellphone is no longer limited to speaking alone. It is being used in making video, recording information , listening to music and accessing the internet. Most students are now bringing cellphones to class, although it posses some significant drawbacks in students’lives, Elementary students should not be allowed to use cellphones in class because these devices can cause issues such as lack of attention in school work, misuse of cellphone applications, and they can contribute to health issues like vision problems and chronic pain.

Don't use plagiarized sources. Get your custom essay on
“ Today cellphone plays a vital role in ones life because use of ”
Get custom paper
NEW! smart matching with writer

In early 90’s schools banned all electronic devices (pagers, beepers, cell phones),which tended to be associated with drug dealing or gangs; however late 90’s Cellphones became commonplace, smaller, and cheaper . Technology advanced and the industry exploded making phones no longer a luxury item. Many school districts allowed phones, but they had to be off during the day. Some tried to ban camera phones or ones that had text messaging.

Not just for emergencies anymore, many parents are using cell phones and text messaging daily to communicate with their children, keep track of them, and manage busy schedules. More and more, cell phones are seen in the elementary grades, although it posses some significant drawbacks in a student’s school life.

Cellphones can cause lack of attention in school works. when a child is in school, his or her purpose there is to learn. Children can be easily distraced from their studies and having easy access to mobile phone during class can make it easier for them to lose focus.

It will negatively affect their academic score as well as future career. According to a 2010 study from Pew Research Center, 64% of students say they have texted in class and 25% have made or taken a call. And it’s not just talking to others. That same study noted that 46% of students play games and 23% access social networks on their phone at any time.

Children have the tendency to misuse the applications of cellphone They use the internet or access social media sites without teacher or parent supervision. These students can be targeted by predators. Predators lurk in chat rooms, on social media sites and other websites that are of interest to students. With the use of smartphones and other devices, it can be hard to monitor a student’s online activity.

Cellphone causes many health issues , allowing students to use their cell phones during school adds to their exposure to this radiation, which can in turn have increased harmful effects on the developing bodies and minds of kids. Also cause vision problem.

Realize that cell phones are necessarily a bad thing for students to have and carry to school, because these devices can cause several issues such as lack of concentration in school work, misuse of cellphone applications(cyber bullying and Taking inappropriate materials), and they can contribute to health issues like vision problems and chronic pain.

Today cellphone plays a vital role in ones life because use of. (2019, Nov 18). Retrieved from https://studymoose.com/today-cellphone-plays-a-vital-role-in-ones-life-because-use-of-example-essay 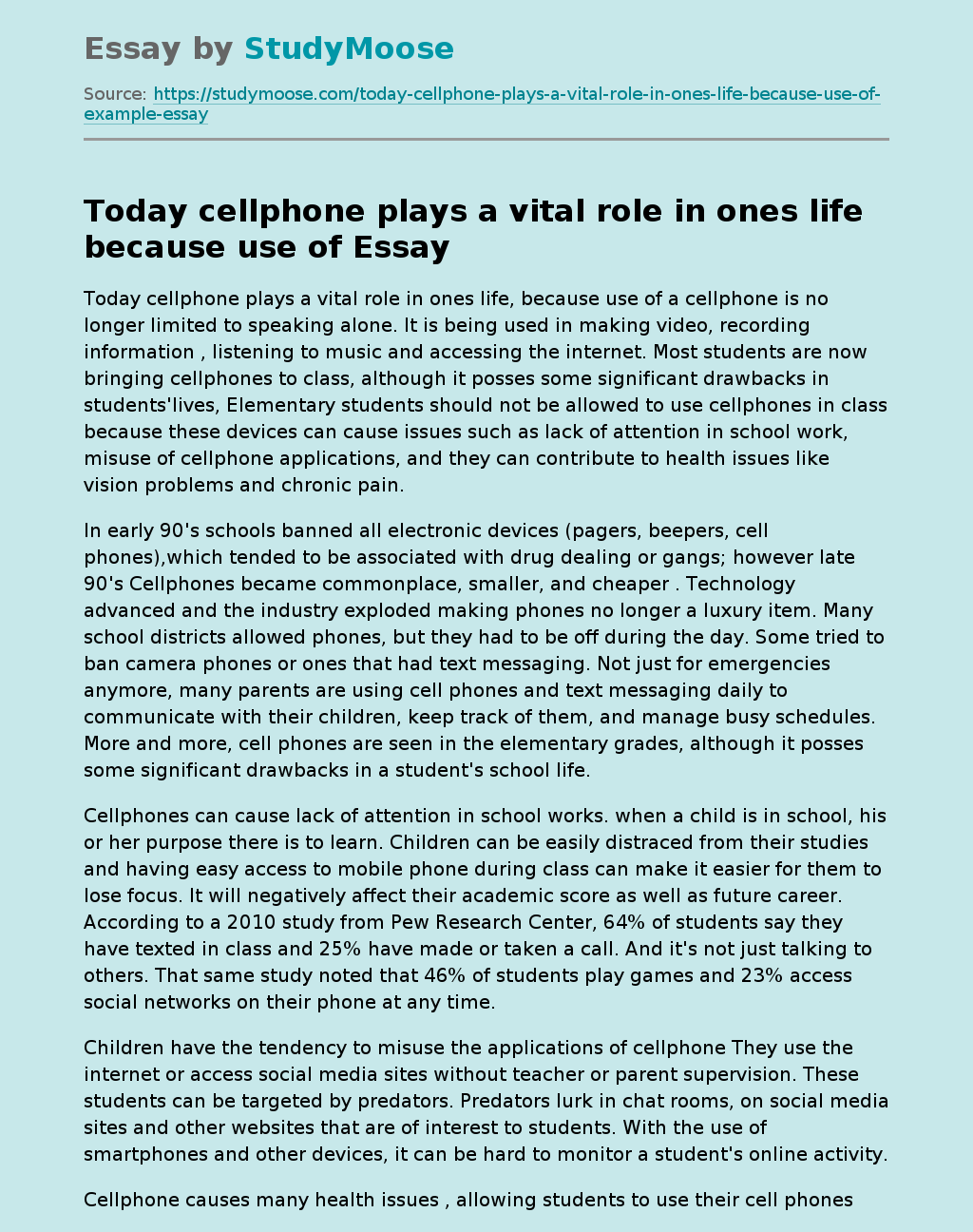