To what extent was naval rivalry the main cause of the first World War?

One of the main causes of World War I was the Anglo-German naval race. Britain, as an island empire, always had the navy as one of her top priorities. A key event in Britain’s naval expansion was the 1889 “Naval Defense Act” that established the “two power standard”: Britain considered necessary to have a navy that was not only the largest in the world, but also equal to or greater than the sum of the world’s second and third largest navies.

Don't use plagiarized sources. Get your custom essay on
“ To what extent was naval rivalry the main cause of the first World War? ”
Get custom paper
NEW! smart matching with writer

On the other side of the channel, also Germany saw naval expansion vital and as the only way to succeed in the acquisition of overseas colony; therefore, the “official” aim of Germany’s naval expansion was to reinforce their colonial empire, but this expansion was also seen as an obvious response to the British naval plans. This situation exacerbated the relations between the two European power and set basic elements for a naval race. In 1906, the Naval Race took an important turn.

Britain launched the ‘HMS Dreadnought’, this new battleship was faster (21 knots), with a bigger range ( 9-12 Km), and powered with ten twelve-inch guns instead of the usual four, it was such an advancement of naval technology that it rendered all existing battleships obsolete. A couple of years later Germany responded to Britain, planning to build four dreadnoughts in a three years time. Britain inevitably had to counterattack Germany’s expansion by announcing the building of eight dreadnoughts instead of three.

Consequently the relations between them were obsessed from the building of the navies, and a direct and evident rivalry was created.

The results of this frenetic naval rivalry was that by 1914 Germany ,even if Britain’s fleet remained considerably larger , had become the second naval world power; they were both ready for a more than ever imminent war. Although the naval rivalry was one of the main causes of World War I and profoundly contributed to create an aggressive situation between the European nations, there was other long terms causes beside it.

One of them was the alliances system that divided Europe in two main faction: on one side the triple alliance, including Germany Austria and Italy, on the other the triple entente, including France Russia and England. These alliances were defined as defensive, but choosing allies obviously also implicate choosing the most likely enemies, therefore this two blocs were ready to fight in case of a war. Another long term cause was the colonial rivalry. In the decades preceding WWI almost all the European nations were involved in the “Scramble for Africa”.

All the nations wanted to demonstrate their strength occupying vast areas of Africa. France was one of the most successful, controlling almost all the West and Centre Africa. Also Germany started an intense colonial expansion and gained a million square miles territory between 1884 and 1899. Britain gained the control of some areas in the south of Africa, in Egypt and on the East and Gold Coast. The colonies were often seen as a source of free raw materials and as the only areas of possible expansion without deeply compromising European balance.

Effects of the colonial rivalry can be analyzed in two different ways, on the one hand colonies were a sort of safety valve allowing the European power to keep the contrasts away from their continent; on the other hand this rivalry implemented the tension between the colonists nations, causing aggressive foreign policy. Besides this long term causes there was also the event that formerly caused the outbreak of war: the assassination of Archduke Franz Ferdinand.

The heir to the throne was assassinated on 28 June 1914 during a visit to the provinces of Bosnia and Herzegovina. The attack was planned from a group of six young Bosnians, even if their first plan to kill Franz Ferdinand failed, Gavrilo Princip, one of them, was able to approach the car and shot the Archduke and his wife. The assassination was the perfect pretext for Austria to start military actions against Serbia, and after gaining Germany’s support Austria-Hungary finally mobilized her troops against Serbia on 25 July.

As a reaction Russia mobilized against both Germany and Austria, Germany declared war on France and Britain declared war on Germany for violating Belgium neutrality. In conclusion none of these causes can be defined as the only cause of war. All of them contributed to create hostility between European powers and to create the basis for a World War. The Naval Rivalry was probably a result of the pre existing tensions but certainly increased the hostility between Britain and Germany.

Anyway the presence of such a great navy and army do not implicate a war but should be a deterrent since large scale destructions would be inevitable. It’s also true that the possession of a great and expensive navy and army pushes to use and test them. The overwhelming impression is that the long term causes made a conflict inevitable and that the short term causes such as the Balkan and Moroccan crisis just helped to increase the tension; while the Franz Ferdinand’s assassination was just the excuse the nations were looking forward to start the conflict.

To what extent was naval rivalry the main cause of the first World War?. (2017, Jan 31). Retrieved from https://studymoose.com/to-what-extent-was-naval-rivalry-the-main-cause-of-the-first-world-war-essay 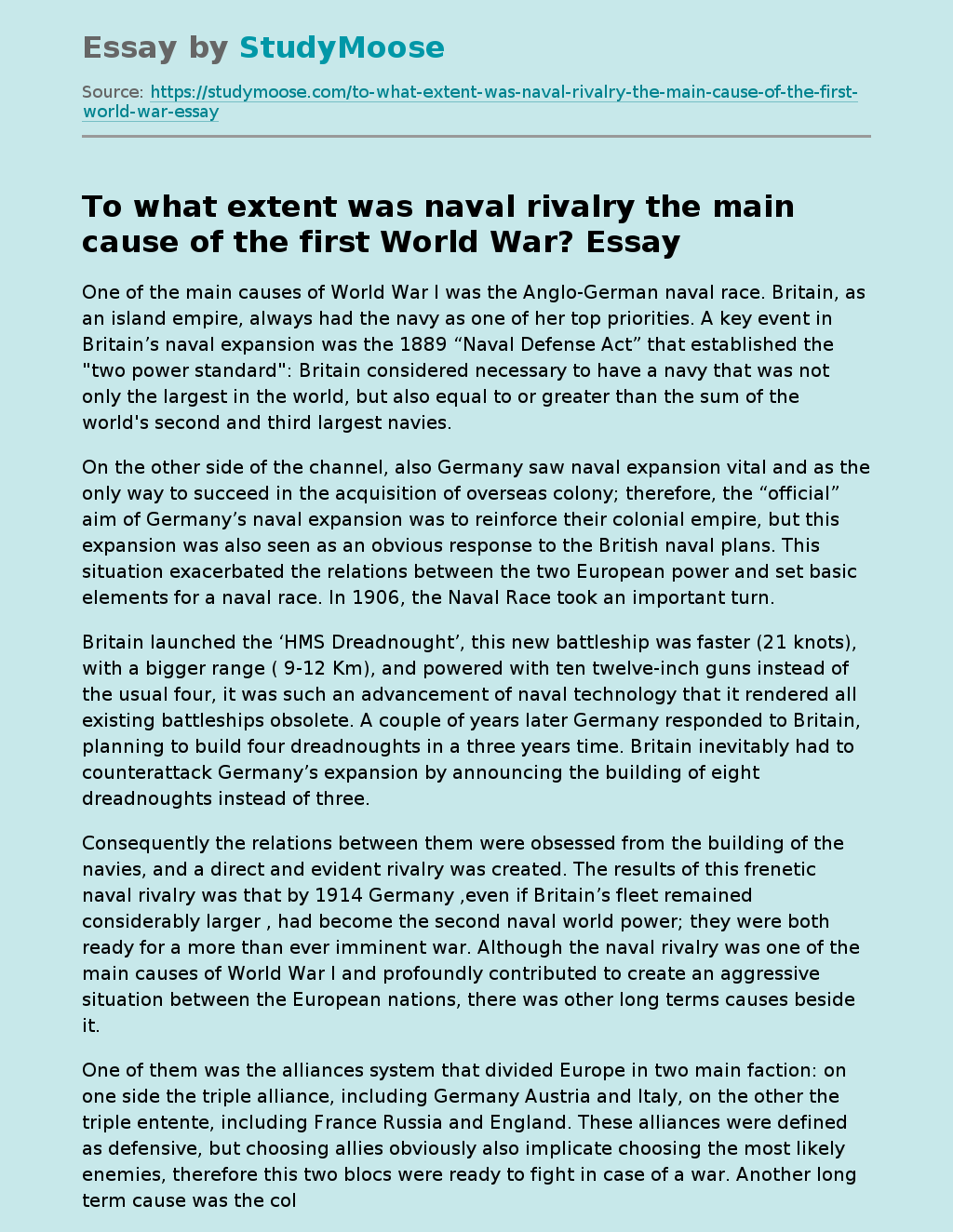