To what extent is Malvolio an anomalous character in Twelfth Night by William Shakespeare?

Malvolio is portrayed primarily as the Puritan servant of Olivia against a backdrop of raucous Catholic festivities. Twelfth Night was a celebration in Elizabethan England held on the 5th January, whereby for one night of the year, households would invert their hierarchy with servants acting as their superiors. A Lord of Misrule would be chosen through placing a bean or trinket into a cake. Whoever received this, became Lord for the day, and ruled over the household, giving a carnivalesque nature to the festival.

Don't use plagiarized sources. Get your custom essay on
“ To what extent is Malvolio an anomalous character in Twelfth Night by William Shakespeare? ”
Get custom paper
NEW! smart matching with writer

Malvolio opposes these festivities wholeheartedly, but finds himself becoming involved in the topsy-turvy nature of Illyria unwittingly, as although he believes he is deeply protestant, his thoughts and actions say otherwise. Malvolio is a Puritan, and is therefore anomalous as the play revolves around Catholic festivities. Feste describes Malvolio’s Puritanism in Act One, saying his ‘nose is no whipstock’. This metaphor implies that money must be beaten out of Malvolio, displaying thrifty characteristics associated with Puritanism.

As this is the first mention of Malvolio in this scene, Shakespeare is setting up our expectations for Malvolio to be someone who will not participate in any revelries during the play. In Act Two Scene Three, Malvolio’s Puritanism shines though when he condemns Sir Toby’s Dionysian behaviour. He believes that such behaviour shows ‘no respect’ to the current situation – as neither their ‘place, persons nor time’ are appropriate for such revelries. His distaste for these celebrations shows his religion as Puritans were especially hostile to social pleasures, such as the drinking of the three fools.

Twelfth Night was especially Catholic and would contravene Malvolio’s Puritan beliefs. In this scene, Feste takes it upon himself to tease Malvolio, and provoke him after he attempts to quash their revelries. Feste swears by ‘St Anne’, indicating the continuation of Catholic worship in England long after the break from Rome in 1534. Similarly, Sir Toby ignores Malvolio and asks for more ‘cakes and ale’ as surplus food and drink was associated with church festivities such as Twelfth Night, seen as distasteful by Puritans. Feste also makes an

allusion to Twelfth Night in this scene when he says that ‘ginger shall be hot i’th’ mouth’. Ginger was put in the ‘King’s cake’ to remind participants of the Frankincense brought to Jesus on Epiphany day; 6th January. Malvolio continues to attempt to stop the revelries by chastising Maria for her involvement in this ‘uncivil rule’ but she responds with ‘go shake your ears’. This could be referring to an ass, a symbol of the natural fool, as in Shakespeare’s earlier play, A Midsummer Night’s Dream where Bottom’s head transforms into that of an donkey making him a target for the other characters’ ridicule.

Bottom asks Quince if he sees ‘an asshead’ (iii, 1, 116) not knowing that his own head has become that of an ass, creating self ridicule through misunderstanding. There is further similarity between the characters of Bottom and Malvolio, as both are described through animal metaphors, Malvolio being alliteratively referred to as a ‘bear’ who is being ‘baited’. This foreshadows mockery of Malvolio in Act Two Scene Five or alternatively mocks him for his Puritan beliefs that didn’t allow him to have enjoyment.

His mockery is described as ‘unrelenting humiliation’1 again presenting him as anomalous. He may be involved in the festivities of Twelfth Night, but his involvement is unwitting and the topsy-turvy nature of Illyria causes him discomfort rather than pleasure. Malvolio is also anomalous as his actions contradict his beliefs. Puritans were opposed to the indulgent sentiments of the Catholics, with simplicity lying at the heart of the Puritan faith. 2 Their dress mirrored this, wearing plain black and white cloth.

However, in Act Two Scene Five, Malvolio fantasizes about a marriage to Olivia where he would be allowed to wear a ‘branched velvet gown’, a highly embellished garment, coupled with ‘some rich jewel’ which opposes the frugality of Puritanism. To spend money on useless items is hypocritical of Malvolio and portrays a distinct incongruity in his character, making him anomalous. Secondly, it was Puritan belief that one must achieve their lot in life through diligence,3 whereas Malvolio’s intention is to marry into nobility and make his fortune from marriage, rather than industriousness, again presenting his anomalousness.

Furthermore, Malvolio becomes conflicted once more when he discusses his sexual desires. Whilst fantasizing, he describes the action of leaving his new wife Olivia ‘sleeping’ on a ‘day bed’, insinuating that she would have been fully satisfied by their love-making. This contradicts the Puritan belief that non-reproductive sexual activities were forbidden4, with sex being a mere tool for reproduction rather than an innately pleasurable activity. When Malvolio inspects Maria’s love letter, he inadvertently spells out a slang word for the female genitals ‘c-u-t’.

This parapraxis reveals Malvolio’s true desires and presents him as un-Puritan. Moreover, as sexual innuendo is base humour, associated with the lower classes. Malvolio’s use of it portrays him as the servant he really is. Finally, Malvolio’s self love shows his irregularity. In Puritanism, man exists for the glory of God, however Fabian uses the symbol of ‘turkey-cock’ to describe Malvolio; an animal synonymous with male pride and self importance. Fabian also implies that Malvolio ‘jets’ around, describing a haughty strut which would add to the audience’s distaste of Malvolio, showing his incredible self-righteousness.

Furthermore, the initials that Maria encodes in her fake love letter bring out Malvolio’s conceited nature and self absorption as he tries to find a way to fit his name into the tetragram M. O. A. I. It was commonly known that Y. H. W. H. was a Hebrew tetragram for God, and by associating Malvolio with his own tetragram, the audience are led to believe that he has surpassed any previous delusions of grandeur and is now comparing himself to God. Self importance could even be considered a sin, as shown by Shakespeare’s Sonnet 62.

Here, Shakespeare describes self love as a ‘sin there is no remedy’ for, meaning that by dreaming of power, Malvolio has committed the most unforgivable of sins, like Satan, an angel who aspired to be God. This sinfulness is a final contradiction to Malvolio’s puritan exterior, making him an anomalous character in Twelfth Night. Alternatively because of the contradiction between his religion and his actions, Malvolio could be said to be congruent with the other characters in the sense that he is fully involved in the carnival spirit of the play.

He behaves in the opposite way to the status of his character meaning that he fits exactly with the nature of Twelfth Night – even if the character himself does not know of his involvement. If Sir Toby and Sir Andrew are seen as carnivalesque characters because they are Knights who act as ‘tinkers’ and ‘coziers’, then Malvolio must also be seen as one for he wishes to be ‘Count Malvolio’ when he is merely a steward. Malvolio’s anomalistic behaviour is also shown through his speech. Of everyone in love , he is the only character who speaks predominantly in prose.

This is especially prevalent when we consider Orsino, who also loves Olivia. In Act One, Scene One, Orsino is languishing in his lovelorn stupor, speaking of Olivia in elaborate iambic pentameter exclaiming ‘Methought she purged the air of pestilence’. This sprezzatura presents Orsinio’s nobility as his superior education conditions him to speak like this. Conversely, Malvolio speaks of Olivia in prose, exclaiming to Jove, the pagan god of sex, ‘I thank thee, I will smile’ after finding the letter in Act Two, Scene Five.

Throughout this scene, Malvolio speaks of his love for Olivia in prose indicating that although he wishes to be ‘count Malvolio’ and dreams of ‘sitting in his state’ he is unable to progress from his actual status of steward. Alternatively, the use of prose in this scene could show that Malvolio’s love is not romantic, but a desire for power and status. His prose could signify his untrue claims to love Olivia, the woman, as he actually loves her title. However, Malvolio does speak in verse in Act Five Scene One when he confronts Olivia.

In this scene, Shakespeare uses iambic pentameter to show how Malvolio’s suffering raises him to a natural nobility. He portrays emotions of confusion and anger, culminating with the line ‘I’ll be revenged on the whole pack of you’. This use of a second person, impersonal pronoun further alienates Malvolio from the other characters, making him even more anomalous. Despite his use of verse, Malvolio’s speech is much more disjointed than characters ranked higher than him, such as Olivia.

His speech is punctuated with caesuras, giving the idea of distressed speech, making Malvolio anomalous as he is unable to speak in the same enjambed manner of the other characters. In Elizabethan England, education depended on status, which therefore affected the way that people spoke. At the age of seven, boys began Grammar school, which was only attended if the child’s parents were able to pay the fees, meaning that someone poorer like Malvolio would have received a less substantial education than a rich Duke like Orsino who would have had private tutors, showing how Malvolio’s disjointed verse portrays his low social status.

Alternatively, Malvolio’s inability to speak fluently in verse could mean that he is perceived as being congruent to his status, making him a conforming character as he is adhering to the parameters set by his title of steward. To conclude, superficially, Malvolio appears to be different from the other characters in Twelfth Night, but upon further inspection, his dreams could be said to be the same as the desires of the other yearning lovers in Illyria. However, his desires are swayed by a different reasoning to the other characters in the play.

His passions are inspired by a want for power, rather than a plague of true, unadulterated love for another, making him an anomalous character in Twelfth Night. Word count :1650 Bibliography Astington, John Malvolio and the Dark House (CUP Essay) Doran, Susan Elizabeth I and Religion 1558-1603 Routledge (1994) Gay, Penny Cambridge Introduction to Shakespeare’s Comedies Cambridge University Press (2008) Mortimer, Ian The Time Traveller’s Guide to Elizabethan England Vintage (2012) Palmer, D. J.

To what extent is Malvolio an anomalous character in Twelfth Night by William Shakespeare?. (2016, Sep 20). Retrieved from http://studymoose.com/to-what-extent-is-malvolio-an-anomalous-character-in-twelfth-night-by-william-shakespeare-essay 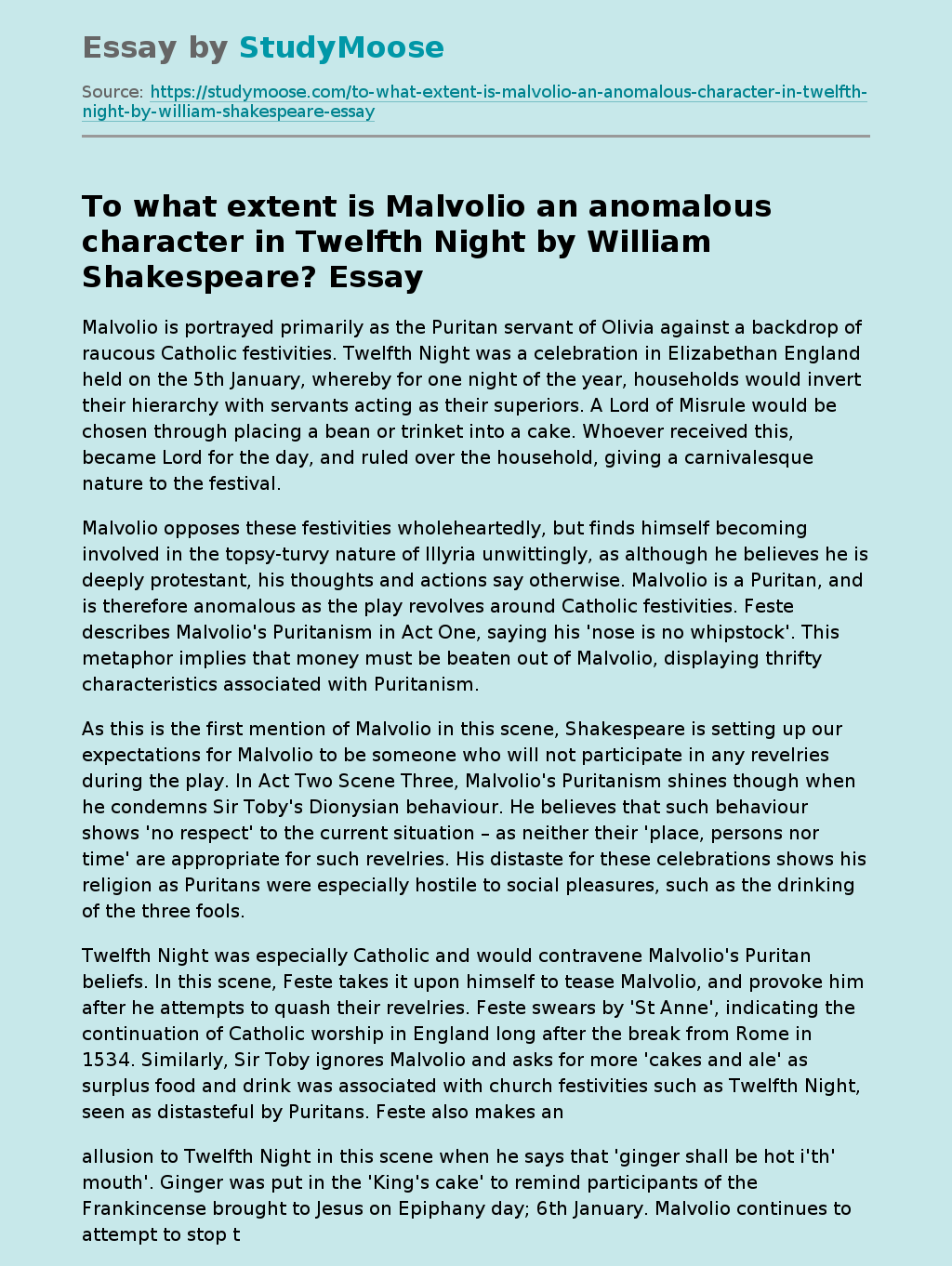