To what extent have constitutional reforms since 1997 made the UK more democratic?

This was due to the fact that many practices of british politics were out of date, and therefore sought to modernise the constitution.

Turn in your highest-quality paper
Get a qualified writer to help you with
“ To what extent have constitutional reforms since 1997 made the UK more democratic? ”
Get high-quality paper
NEW! AI matching with writer

Another main issue was that the central parliament, Westminster has too much power and therefore the labour party sought to decentralize and distribute the power towards other regions.

The act reduced members of the house of lords from 1,330 members to 669 members and a proportion of the members that are ‘cross benchers’ members with no party affiliation. In order for this act to receive supported votes, Tony Blair and the labour party passed the Weatherill Amendment that put in place a deal that allowed 92 of the 669 members to remain heredity.

The reforms in houses of lords progressive towards democracy due to the fact that Historically, members of the House of Lords have been the richest and most important landowners in the country, who would pass their peerages down through their family, which creates bias towards the wealthy.

By decreasing the number of hereditary peers and increasing the number of appointed life pears this creates better qualified members that are more obedience to the law. Another benefit to the reforms is that the prime minister appoints members based on their profession, for instance the majority of the life peers that are in the house of lords are lawyers which indicates expertness in the skill of observing, as a result the reformed house of lords frequently defeat government.

On the other side you could argue that the reform is still incomplete, and that Tony Blair initial aim when he came to government, was to have a fully elected house of lords, in this case would have been more democratic. Due to elected politicians in the house of lords many appointed members by the Prime Minister are part of his own party which can ais the Prime Minister in decision making which creates worse legitimacy.

The second reform of the constitution is the Human Rights Act that was Labour’s first major reform, that came in act in 1998. Before the Human Rights Act the Uk was part European Convention of Human rights that was adopted in 1950. The human rights(HRA) Act came into force in 2000 in the Uk. The HRA has the effect of of codifying the protections in the European convention in the Uk law.

This act created a Uk bill of right that is more suitable to represent the population living in the Uk, because of adopting the convention to the needs of britain; this allows British judges to suggest their own way of Judging based on the British culture which is more appealing to the the British people which indicates more democratic. The Human Rights Act requires all public for instance; local authorities, central government and the courts authorities to obey the convention.

One of the major benefits of the HRA was that individuals could now take their own cases in domestic courts which save up the individual’s time in comparison to before when individuals had to go to Strasbourg to argue case in european Court of Human. However there are some negative effects of the HRE, because that this reform was incomplete as a new biil o rights was proposed, no legislation was put forward by the government. In a perspective it could be seen that there was a change in the Uk constitution, the lack of a confirmed bill of human rights illustrates that the reform did not go far enough.

Mayoral Elections were first introduced in 1985. During the time Thatcher was in power, she abolished the way the london mayor is elected by which is supplementary vote. The supplementary vote system was reintroduced in 1997 by Blair. This was one of the constitutional reforms of the London government. The Greater London Authority (GLA) is in the top tier administrative body for greater london which was established in 1995.

The GLA consists of 25 elected members and an elected Mayor with scrutiny powers. It is a strategic regional authority, with powers over transport, policing, economic development, and fire and emergency planning. The reform of the London government is an example of devolution, but specific to london which give many benefits. Such as Influential decisions, such as lon 2012 olympics. Most importantly the London constitutional reform is a more democratic than the last London government before labour came into power, this due to better representation of the local population.

However the reform might be progressive towards democracy yet it is still not a completely democratic to the Mayor is budgetary proposals can be vetoed by the assembly which indicates that the mayor is subordinate to the assembly. A major issue is that the GLA and the Mayor have no power over tax which indicates limited representation of the local population.

Overall the reforms made to the constitution since 1997 are more democratic compared to the previous constitution. The house of lords is better represented and consists of members of better expertise, the human rights act that has been adopted to the british constitution is suitable for the people, and Londo is better represented by the local population due to the creation of the GLE and influence the Mayor and his colleagues in the GLE can act.

Even though the reforms increase democracy in the constitution, it still does not mean that the reformed constitution is completely democratized, for instance; the house of lords is still not elected, human rights act lacks an established bill, and that the power of the London government is limited. This indicates there are still future reforms that are to be made towards democratizing the Uk constitution; in a perspective further reforms of improving democracy in the Uk could be limited due to the fact of drawbacks in a democracy, for example a mobs can influence people.

Citizens may vote in favor of a party under the influence of the majority. Compelled or influenced by opinions of those around, a person may not use his own judgment when voting. This may cause fascist parties to come into power, which could indicate a complete democracy may not be the best system.

To what extent have constitutional reforms since 1997 made the UK more democratic?. (2016, May 16). Retrieved from https://studymoose.com/to-what-extent-have-constitutional-reforms-since-1997-made-the-uk-more-democratic-essay 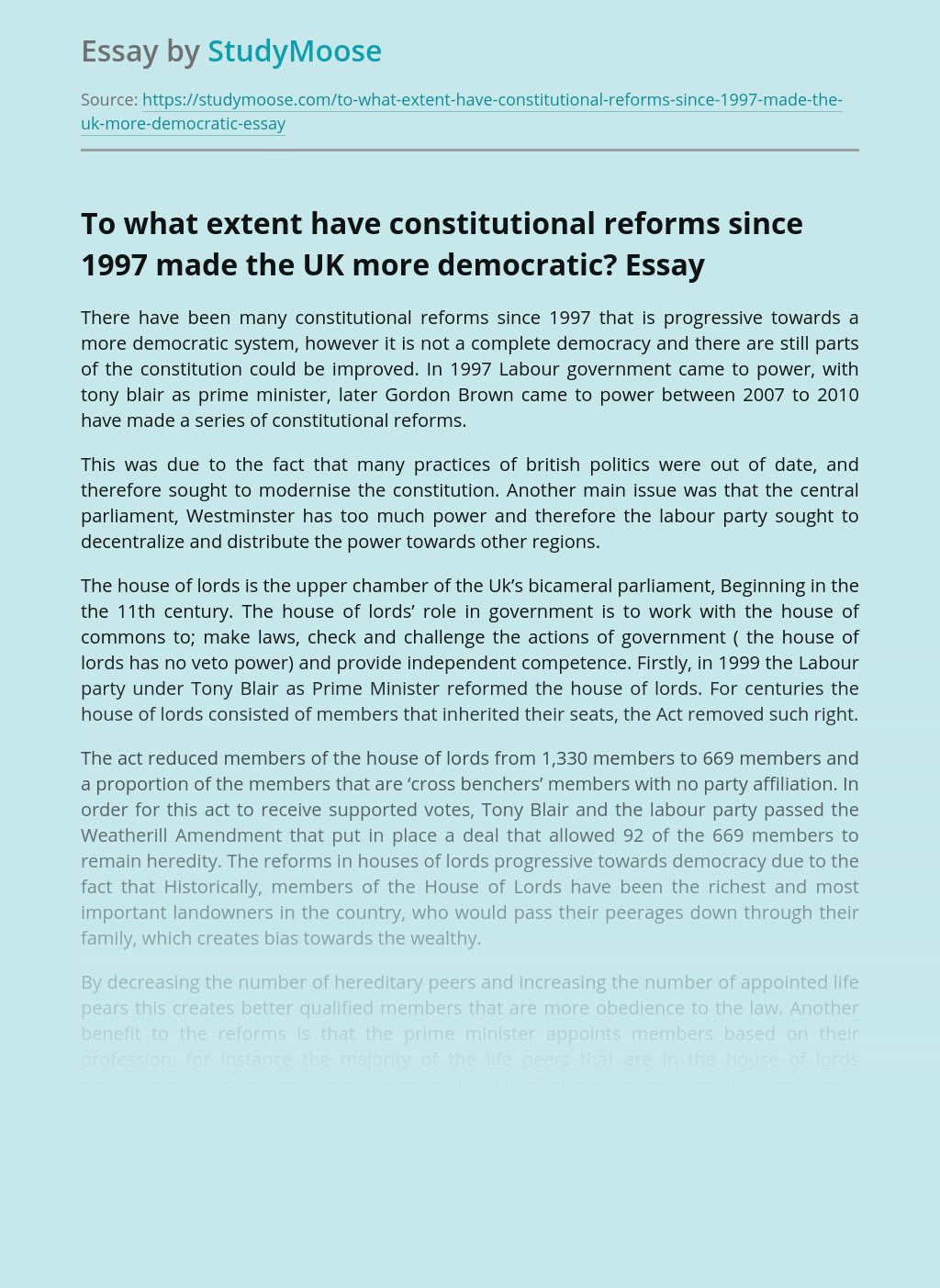 Turn in your highest-quality paper
Get a qualified writer to help you with
“ To what extent have constitutional reforms since 1997 made the UK more democratic? ”
Get high-quality paper
Helping students since 2015
Stay Safe, Stay Original