To What Extent Does Animal Cruelty Affect Society?

Harming animals has been something that has been practiced for a long time, and is still being done in our modern day society. Violence or neglect perpetrated against animals is considered animal cruelty. It commonly takes place in both rural and urban areas intentionally by people who hoard, who make abusive actions, and who are in need of mental health or social services. Victims of animal cruelty are usually dogs, cats, horses, and livestock (humanesociety.org). Countries who are affected greatly by animal cruelty include Iran, Belarus, Ethiopia, and Venezuela.

Don't use plagiarized sources. Get your custom essay on
“ To What Extent Does Animal Cruelty Affect Society? ”
Get custom paper
NEW! smart matching with writer

On the opposite side, Austria is a prime country that combats animal cruelty by placing strict laws that punish offenders harshly if they are caught. This contributes to society frequently, and raises the question to what extent does animal cruelty affect society? As said previously, animal cruelty is usually practiced by people who make abusive action. Researchers have found a riveting link between abuse against animals and violent acts such as domestic violence, child abuse, elder abuse and other violent behavior (aldf.

org). According to them, a study made in 1997 by the Massachusetts Society for the Prevention of Cruelty to Animals and Northeastern University found that animal abusers are more 5 times more likely to inflict harm on humans.

Another study published in 2013 found that 43% of those who commit a school massacre also commit acts of cruelty to animals. This source is deemed to be a reliable source for these types of information due to them being experienced and determined to combat animal cruelty through the legal system.

It is not biased because they use factual researches and evidence that supports their cause. Animal cruelty is upsettingly common in Iran and according to the country’s religion, Islam, dogs are considered dirty and impure and the islamic legal tradition has developed traditional injunctions that warn Muslims against contacts with dogs (animalsinislam.com). Sadly there have been Muslim that use this view to justify abusing and neglecting dogs. A site called “Animals in Islam” made by a Muslim veterinary surgeon talks about how dogs are treated in the Muslim community in their own perspective. This is to show how animal cruelty in Iran plagues their society. On social media, there have been animal cruelty recorded in videos which have been seen by many and over the past several years, there have been complaints about images posted that featured animals being abused. Seeing that, animal activists and protestors have gathered together in the Iranian capital city, Tehran, and other locations, and have been on the rise to combat the issue in Iran. Activists have also resorted to social media using popular apps like Telegram and Instagram to ask people for help to feed and treat the animals that are in distress. They have made a tremendous enough impact that their efforts have been recognized and heard by the Iranian government and spread by others. According to the World Animal Protection, Iran was one of the countries given the lowest rank when it comes to animal protection, which is a ‘G’on the Animal Protection Index (API), due to it being one of the poorest countries to apply sanctions for animal cruelty. The World Animal Protection is an international, non-profit organization that aims to end animal suffering and should be considered a reliable source for factual information because of their experience and determination for this matter. I also personally believe that they have a high standing reputation due to them working with other animal welfare organizations, communities, businesses, and governments in the countries they work with (give.org).

As for The Animal Protection Index, made by the World Animal Protection, is a ranking of countries around the globe according to their legislation and policy pertaining to protecting animals. The API has given each country an overall score, ‘A’ representing the countries with the highest results, and ‘G’ representing the countries that need improvement in their legislation and policy (api.world animal protection.org). There are no legislation or policies that oppose animal cruelty, however, Farhad Dabiri, a senior adviser to Iran’s Environment Department, told the ILNA(Iran Labour News Agency) that a protest against animal abuse that was held last year in front of the department’s offices convinced Massoumeh Ebtekar, who then headed the organization, to prepare a bill. (rferl.org). In the European country, Belarus, animal cruelty is also common due many neglecting the animals and leaving them to starve and such. Just like Iran, Belarus has also ranked the lowest grade by the API when it came to sanctioning animal cruelty (vaci.voiceless.org.au). One incident that occurred was stray cats being locked in basements and starved to death. According to news reports, officials have been foreclosing apartment basements and have trapped stray cats from leaving. Elena Titova, leader of Protect Life, an animal rights group, estimated that about 9,000 cats have been killed. Upon hearing this, people who were upset about the event have made efforts to aid the cats in distress. One is a 72-year-old woman, who took the time to feed the cats trapped through small holes in metal plates that board up the basements so she can prevent them from starving to death. Another, Chris Wolverton has also helped by creating a petition online to help stop the incident, 66,205 people from around the world signed the petition (occupyforanimals.net).

On October fourth, world animal day, dozens of pet owners and animal rights activists marched through the streets of the Venezuelan capital, Caracas, in a demonstration against animal cruelty. Around a hundred animal cruelty activists walked around with their pets holding signed and shouting “Here we are, here we are, those that respect animal rights!” (aparchive.com). During the march, the activists called on the government to ban bullfighting and Venezuelan style rodeo, known as, coleo, during which a cowboy grips on a bull’s tail and yanks it to the ground; the bulls tend to get harmed for entertainment purposes. As for the African country, Ethiopia, animal neglect is an issue. Just like Iran and Belarus, Ethiopia was given the lowest rank, ‘G’, for its lack of sanctions against animal cruelty according to the API (vaci.voiceless.org.au). In Ethiopia, transportation animals like horses and donkeys are used to move merchandise and pull carts. They often carry loads much beyond their strength and are beaten when they struggle. When these animals are old age or injured, people abandon them to fend for themselves, they suffer from lack of adequate food and water and are often hit by cars or become targets of animal abuse.

Dr. Anteneh Roba a physician in Houston, Texas created an organization called the International Fund for Africa; its main focus is to teach and spread awareness about both animal and human welfare in his native land. The IFA highlights education humanely ways to treat these horses and donkeys, including a provision of water, lighter loads to carry, and discouraging hobbling, which is tying the animal foot to stop them from straying. In common cases of stray dogs in Ethiopia, Dr. Roba helps to rescue the dogs and with the help of the Homeless Animal Protection Society of Ethiopia (HAPS), he saved four dogs from dying and sent them to the United States where they’ll find a better life. Two of the dogs were sent to a rehabilitation center in Utah and two others were sent to Houston where later on, got adopted. IFA has done plenty to help in Ethiopia and their goal is to become a role model and teaching resource project for animal cruelty (advocacy.britannica.com). In Austria, animal welfare is greatly protected there; many laws and legislation there make it difficult to perpetrate harm against the animals. Austria was ranked an outstanding ‘A’ which is the highest a country can get for their sanctions against animal cruelty (api.worldanimalprotection.org). Unfortunately, even with Austria being one of the best to protect animal welfare, there are still abusers who harm and cause animals to suffer. One case being twelve perpetrators that slaughtered seventy-nine sheeps causing them unnecessary suffering while slaughtering them (businessinsider.com).

Business Insider is considered to have a high reputation, generally trustworthy for information and their factual reporting is high (mediabiasfactcheck.com). The organizer of this slaughter was fined one thousand two hundred sixty euros, which is one thousand five hundred in American dollars. This is why there are many animal welfare organizations in Austria that aid the animals in distress; these organizations may be non-governmental organizations. Along with other animal activists, Carol Byers, an American, founded an organization that focuses on helping the animals of Austria, called Animal Care of Austria in 2006 (animalcare-Austria.at). Byers supported various animal cruelty groups in the US and Austria for years; their main goal is to partner with similar groups just like them so they can combat animal cruelty more efficiently. Although animal cruelty is projecting negatively and usually shows humans at fault, there are exceptions where the animal gets aggressive and attacks the human instead. Animal bites are a major public health issue in Iran and they are associated with infectious diseases that starts from the bacteria tetani which develops the disease tetanus, it develops painful muscle spasms and can ultimately lead to death, and the bacteria perfringens, which is usually causes food poisoning (ams.ac.ir).

In Ethiopia, more specifically in the city Addis Ababa, there have been in infestation of hyenas. There were about 300 to 1,000 living in the city and it was a danger. In 2011, airport authorities had to call in hunters for the hyenas that were posing a threat to the planes landing and taking off (bbc.com). Not only that, but the hyenas sometimes attack poor people that sleep on the streets. In December of 2014, authorities organized a cull, which is the slaughter of wild animals, and licensed hunters to kill 10 hyenas that were living near the capital of Ethiopia (bbc.com). This is an example of how some cases aren’t considered animal cruelty but more of defending and maintaining security in the community of Ethiopia.

In my perspective, I do not condone animal cruelty, unless the animal is harmful and causes ravage, animals should not be abused. Although the researches i’ve done not change my view and opinion on this topic. I do recognize why people abuse animals in some scenarios. It could be due to where people grew up, and their surroundings; it can also be a cultural thing, such as religions, and the environment a person grows up and what country they are in. I believe that animals can be used for beneficial labor like for donkeys being used for transportation, however, I believe that to a degree. I believe that any animal that does not perpetuate harm against humans does not deserve to have harm perpetrated against them and that humans should take animal welfare into consideration.

To What Extent Does Animal Cruelty Affect Society?. (2021, Apr 19). Retrieved from https://studymoose.com/to-what-extent-does-animal-cruelty-affect-society-essay 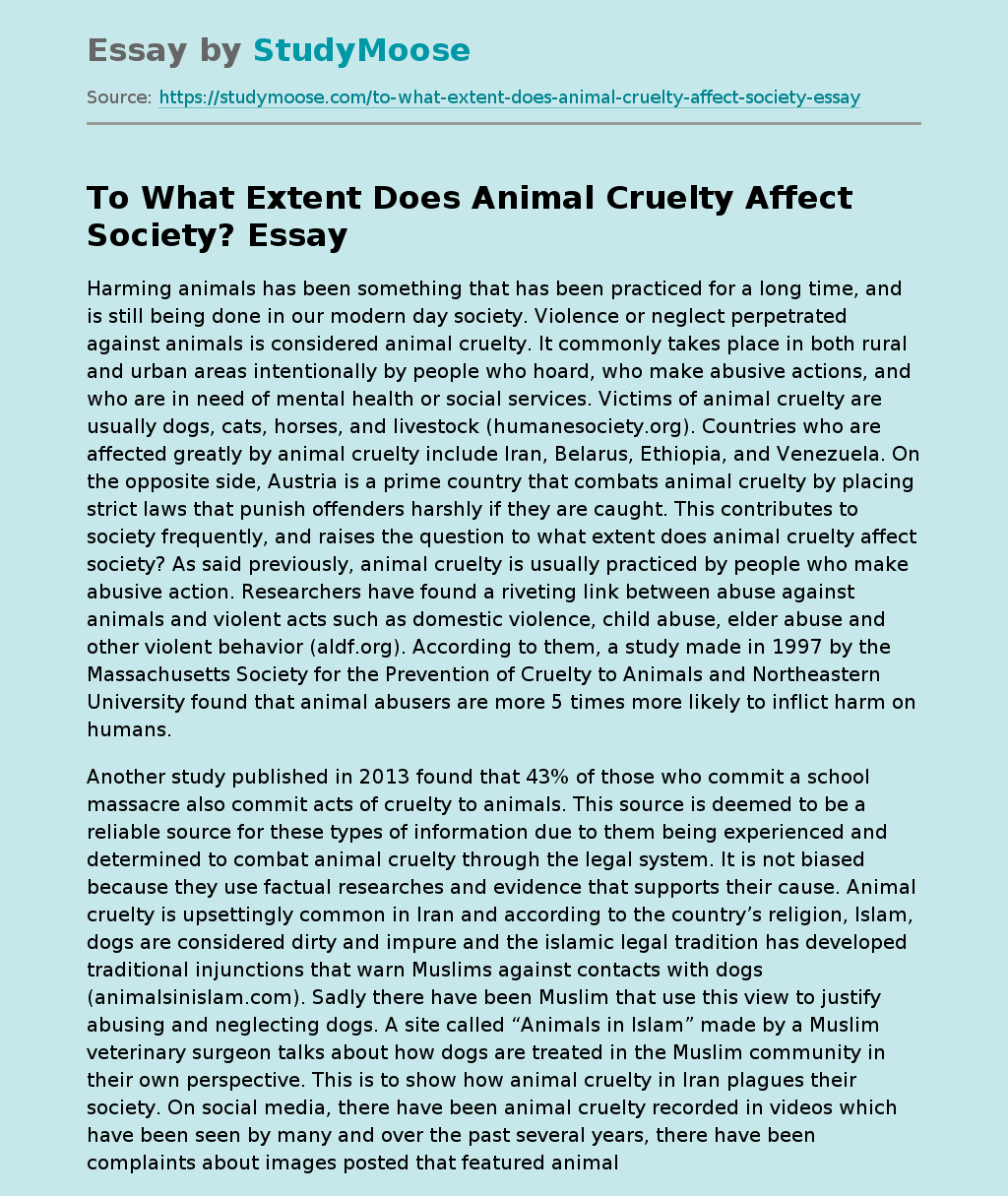