To what extent did the Manchurian Crisis Affect the Credibility of the League of Nations?

Since the 1900’s, the Japanese had been a rapidly growing nation. By the 1920’s, Japan was a major power. It had a strong army and navy, and had a flourishing industry that exported goods to China and the United States. It had a vast growing empire in the North Korean Peninsula and was one of the leading members of the League of Nations, claiming a permanent seat on the Council. Though in the 1920s, Japan had been badly hit by the Depression; their exports had fallen by 50% between the years of 1929 and 1931 leading to a great decline in their once very strong industries.

Don't use plagiarized sources. Get your custom essay on
“ To what extent did the Manchurian Crisis Affect the Credibility of the League of Nations? ”
Get custom paper
NEW! smart matching with writer

Without exports, Japan could not buy the imports she needed, forcing the country to take action; thus becoming one of the main causes for the Manchurian Crisis. This poses as a period of great significance in the history of the League of Nations because of how they had responded to the situation. It is also one of the many reasons as to why it had been deemed powerless shortly after.

Japan felt that they needed to expand their empire in order to overcome the effects of the Depression by finding living space and raw materials required to support their overcrowded country.

Japan looked at China as a large field for economic exploitation. They had chosen Manchuria because it was rich in agricultural land, forestry and minerals and was very weak at the time; poverty stricken, seemingly ungovernable, torn by warlords, banditry and civil war. It was the ideal situation for the Japanese, and gave them all the more reason to invade.

Though they needed a reason to invade, Japan had no problem setting it up as they owned the South Manchurian Railway; to which they used to their advantage. On the evening of September 18th 1931, the Japanese had staged the Mukden Incident in which they had set off an explosion along the Southern railway, just outside the city of Mukden. The Japanese army claimed that this was an act of sabotage by the Chinese and had permission from the government to retaliate if the Chinese attacked any property in the area.

In turn, leading them to respond to the explosion in a violent manner by attacking the nearby Chinese Garrison, easily securing and taking control of it due to the fact that the Chinese government had ordered troops in the area not to resist any attacks by the Japanese. The reason behind this is because of the policy China had imposed during the time when the Mukden incident occurred to which there would be no resistance to Japanese troops primarily because the country wanted to focus on defeating communism in China and achieving a strong and stable government.

Consequently, forces of only 11,000 Japanese soldiers were able to take control of Manchuria despite the 250,000 troops present in the area. In order to retain control of Manchuria, the Chinese appealed to the League of Nations. In October, the League of Nations passed a resolution saying Japanese troops should withdraw from Manchuria. The Japanese, with their ability to VETO, had rejected this resolution and insisted on direct negotiations with the Chinese government.

This in turn failed, and the Japanese proceeded with their invasion to which they took control of the rest of Manchuria. The League of Nations responded by listening to the complaints of the Chinese as well as the Japanese and the Council whilst representatives of each country discussed the issue at hand before finally coming up with a resolution. This particular resolution once again called for the withdrawal of the Japanese from Manchuria while a Commission investigated the issue.

The Lytton commission was appointed to investigate the crisis. This took over a year to report, by which time the invasion and occupation of Manchuria was complete. Manchuria had been renamed to Manchukuo and the last Chinese Emperor, Pu Yi, who had been overthrown in 1911, was made the Japanese puppet ruler. When the Commission submitted its report in October 1932, it had found Japan guilty of forcibly seizing part of China’s territory. The League of Nations accepted the Lytton report and instructed all members of the League of Nations not to recognize Manchukuo as a nation.

In February of 1933, a special assembly of the League of Nations was held in order to vote on the issue. When votes showed that majority had won over the resolution ordering Japan to withdraw from Manchuria, the Japanese delegation had simply walked out of the room and never returned. According to the rules of the League of Nations, failure to comply with a resolution should be followed by economic sanctions and/or collective military action to enforce the resolution.

The League of Nations however, did neither. This was a problem because no country could agree on what economic sanctions would deem fit for the situation. Along with the major powers, Britain and France being unwilling to risk their armed forces in a conflict so far away from Europe. Doing so, would ultimately risk an attack on the British and French colonies in the East. The departure of Japan from the League of Nations meant that the Far East was removed from the international system of collective security and this in turn suggested that the League would not follow through on its philosophy of maintaining collective security.

Japan evidently got away with the act, along with Manchuria due to the League’s failure to take appropriate action. This is one of the many failures that led to the downfall of the League and affected its credibility greatly as it soon led to Mussolini to plan his expansionist adventure in Abyssinia, otherwise known as the Abyssinian Crisis. The Manchurian Crisis was an example of the League’s poor organisation and the lack of control between the major powers, Britain and France.

The League of Nations was highly dependent on the United States of America to help impose economic sanctions. Yet due to the absence of the United States from the League, sanctions were rendered useless with the existing members continuing to argue about the extent at which these sanctions should be imposed.

To what extent did the Manchurian Crisis Affect the Credibility of the League of Nations?. (2016, May 15). Retrieved from https://studymoose.com/to-what-extent-did-the-manchurian-crisis-affect-the-credibility-of-the-league-of-nations-essay 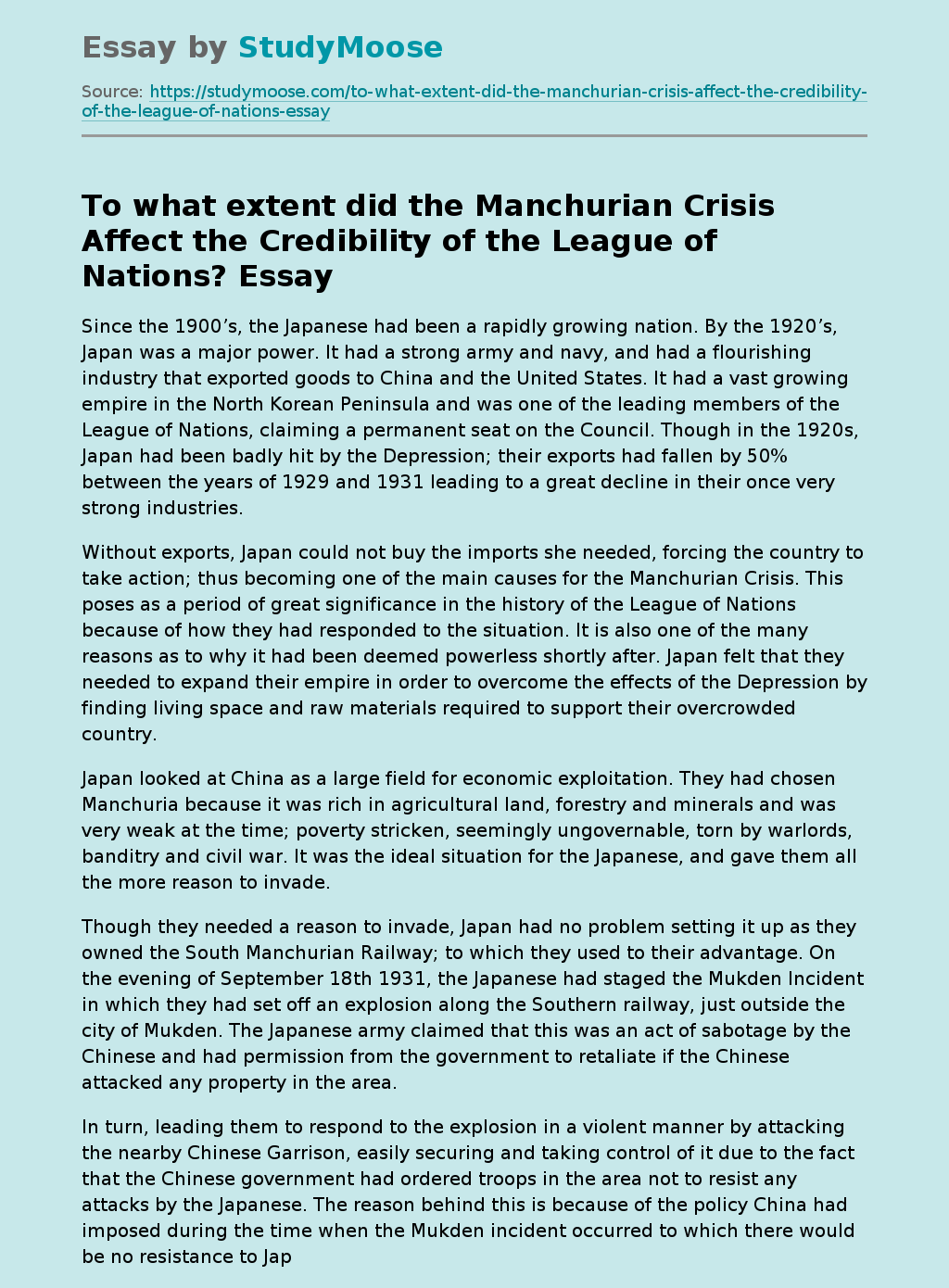