To What Extent Can David Cameron Be Considered a New Right Leader?

To what extent can David Cameron be considered a New Right Leader? New right are a group of Conservatives where views diverge from those of traditional conservatives. New right came famous under the rule of Margaret Thatcher who was Prime Minister from 1979-1990 and they are known for having very right-winged policies. To me, David Cameron is a New Right leader and in this essay there will be reasons on why I personally believe that David Cameron is actually a New Right leader The Conservative Party has always been Eurosceptic, most conservatives (not all of the members though) are suspicious of the power and activities of the European Union.

Don't use plagiarized sources. Get your custom essay on
“ To What Extent Can David Cameron Be Considered a New Right Leader? ”
Get custom paper
NEW! smart matching with writer

This links to the New Right as because the UK is puts so much money into the EU, it is not beneficial whatsoever and does not serve in UK’s best interest. This is Economic patriotism which falls under neo-conservatism which is one of the two parts of the New Right.

Due to the crisis with the Eurozone, most conservatives’ beliefs about not joining the EU have been reinforced. Iain Duncan Smith – the Works & Pensions Secretary and a former leader of the party decided to cut benefits and also has introduced the “Welfare Reform Bill” which has made it harder for any single family to claim a certain amount of Benefits.

Iain Duncan Smith said that the current payment of benefits is supporting “dysfunctional behaviour”, and for some families the notion of taking a job is a ‘mug’s game’. Due to the benefits some people receive they do not make an effort to find a job and work and this is causing an increase in the dependency culture (a culture where the children will see their parents living off benefits and will do the same when they reach adulthood, this is one of the things that the new right tried to decreased).

There are about 1-in-5 households where no-one works and as more families claim for benefits, it costs the tax payer £9 billion a year. It was after the 2010 election that the conservatives restored its attack on the growing dependency culture. This links to the New Right, more specifically neo-liberalism which is another set of principles in New Right. New Right have always believed that the levels of welfare state benefits were too high and because of that people were becoming too dependent on benefits and had no plans to find work – something Iain Duncan Smith also said. They believed that benefits were seen as a way for the unemployed to stabilise themselves whilst looking for work, however not as a way to live and fall under the underclass. The Conservatives as of now and back in the Thatcher era share the same views on the dependency culture in the UK. When it comes to low taxation, the conservatives have always been for reduced taxation so it was not a surprise to see that the top rate tax (which is tax paid by the very highly paid) was reduced from 50% to 45%. Also with pressure from the Conservatives’ partner in the coalition government – Liberal Democrats have also decided that people who earn less than £10,000 a year do not have to pay tax at all.

However there have been doubts if this tax cut has made a difference anyways, reasons for this being that the majority of the UK earn more than £10k a year and it is only a very small group of citizens that do not earn over £10k in a year. This links to the New Right because during the time that Thatcher was in power they rapidly reduced income tax and just like what the conservative party have done recently since being elected have reduced top rate tax from 83% to 60% and by the end of the 1980s it was 40%. It is clear that when it comes to reduced taxation both Cameron and Thatcher shared the same traditional conservative belief. On the other hand there are some points that do state otherwise from my opinion. Law and Order is one of the points and Cameron’s approach to this is very different from what Thatcher would do. Cameron proposed a more ‘softer’ and more liberal approach to crime especially juvenile crime, less harsh sentences being one example of these approaches.

The infamous ‘hug a hoodie’ speech were Cameron spoke about being less harsh on young offenders and be more tough on the causes of the crime and on the social influences and causes which might drive the adolescents into committing crime. With the New Right they believe that crime and disorder is a matter of “personal responsibility” that if they did it there is no ‘social cause’ and they did it because they are criminals who need to be punished for the crime they have committed. Unlike Cameron New Right are much more authoritarian and harsher when it comes to sentences. However due to the 2011 riots, Cameron’s proposed plan of being less harsh was scrapped and replaced with more harsher approaches – longer prison sentences.

Cameron before he was elected had very one-nation views when it came to crime, however as soon as he got into power and was faced with the riots he scrapped his original plan and has become more authoritarian just like Thatcher was. This may suggest that maybe Cameron was trying to show the British public that he was not like Thatcher and that he ‘is a one nation leader’, just to regain the popularity that the Conservatives lost after the landslide win by the Labour party in 1997, when in reality he is just a new right leader. The environment has never been the most important priority to the Tories, however with Cameron it has become the highest priority. Cameron proposed more environmental policies than other political parties and also tougher ones too, some of these policies being: whilst in government the conservatives will invest £110 million to restore England’s rivers & also investing half a billion pounds in rural broadband by 2015.The Conservatives changed their logo from a torch which was introduced by Thatcher, to a crayon drawn tree. This might suggest to change the conservatives want to remove the bad ‘nasty’ image that the general public assume they are start fresh and show them that they are different from the Conservatives in the 1980s. Also unlike the New Right that is completely against State Intervention, the Conservative party believe that these current environmental problems need to have the state intervening as it won’t fix themselves.

The New Right do believe that the environment is important; however it is not the main priority to them unlike the economy for example (which at that time was struggling) whereas with Cameron it is the number one priority (though this priority might have changed due to the recession). The New Right also believed that environmental problems have a solution which is technology that would be harmful to the environment and instead of removing the problem it would adding onto the problem. Even though Cameron has said the environment was the main priority, he has not done anything major regarding the environment since being in power. Also some of the policies that have been put into place might be good however the costs for doing these policies are too high and also since the UK is in a recession where would this come from? Despite the London Mayor, Boris Johnson not in favour of the third runway at Heathrow Airport Cameron on the other hand – is, as it would bring more tourists into the country meaning more money for the economy.

Even though this is extremely bad for the environment Cameron is in favour because of the future investment something the New Right would be in favour for aswell. My opinion still stands that David Cameron is a new right leader, although he ‘may’ have had some one-nation policies they all of sudden changed into policies that the New Right would create as soon as the conservatives got into power. Even though there have been some changes to the conservative party (the party has now got women, homosexual and ethnic minorities members and MP meaning they have become more inclusive to different minority groups) and they are not as ‘nasty’ as they were seen before it is more convincing that they are not exactly as new as the general public might think.

To What Extent Can David Cameron Be Considered a New Right Leader?. (2016, Apr 05). Retrieved from https://studymoose.com/to-what-extent-can-david-cameron-be-considered-a-new-right-leader-essay 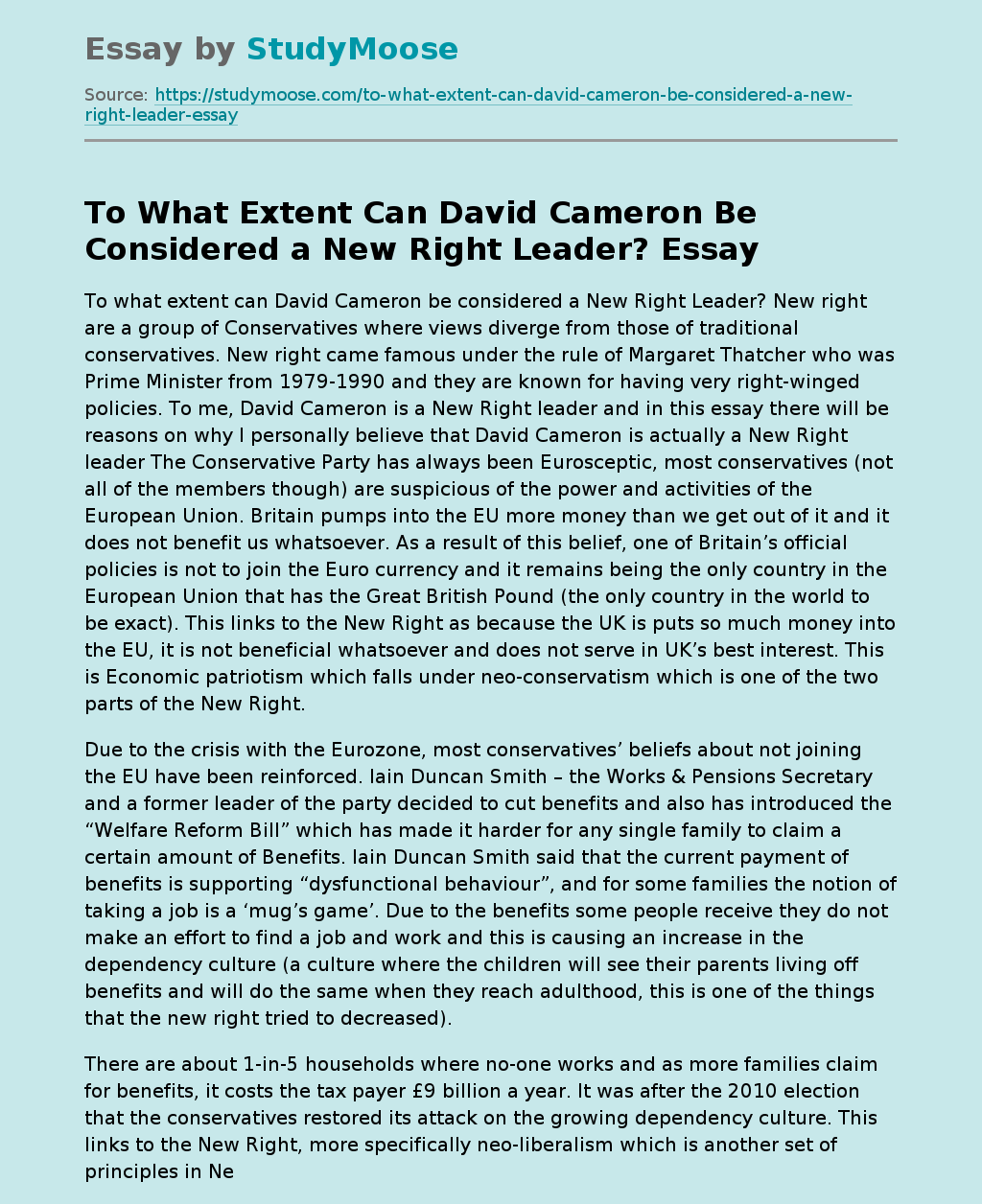