To What Extend Does Miller Portrait Willy Loman as a Sympathetic Character?

The character of Willy Loman in Arthur Miller’s “Death of a Salesman” is very interesting and surely worth looking closer at. On the one hand Miller portraits Willy Loman´s character as very bad with describing him as a cruel man who has a “mercurial nature”(p. 8). He is a person who gets upset very easily and quickly for example when his wife Linda tells him that she has bought a new kind of cheese he starts shouting at her.

Don't use plagiarized sources. Get your custom essay on
“ To What Extend Does Miller Portrait Willy Loman as a Sympathetic Character? ”
Get custom paper
NEW! smart matching with writer

This also shows that he takes everything really personally and is afraid of things, which are new. His mental state is in a very bad condition since he is often very confused and his mid changes from the present to the past and back.

Moreover Willy cheats on his wife with a woman he met in Boston Through this affair Miller shows the audience how lonely and desperate Willy is. The women appears in different places symbolised with a pair of stockings, which Willy gave her a present while his wife has to mend hers.

In general I would suggest that the way he treats his wife is very bad and disrespectful. On the contrary Miller describes him as a man who tries very hard not only in his job he wants to have success but also in only wanting the best for his sons, wanting them to succeed. It is kind of a sad irony that he reaches the exact contrary, because he is just stocked in his dreams while his sons “turned their backs on him” (p.

) and towards the end of the book he even loses his job. All he has ever tried for and reached in his dreams disappears in the hard light of reality. Also there has to be a loveable side of him, which is for the reader probably hard to see, but the way his wife admires him Miller shows that Willy Loman could be and was loved.

I think to understand Willy is in one way not too hard since almost everybody would agree that living in a wonderful dream is easier than facing the reality. On the other hand it is very cowardly how Wily ends his life. As Miller once said that the tragedy of Willy Loman is that he gave his life in order to justify the waste of it, which is just an incredible waste of a life, which other people probably would give everything for.

Willy Loman is portrait as man who fails in all kind of ways. He is stocked in his dreams, can not manage the reality. His dreams of the past support the feeling that Willy prefers to be in better times. He has built his perfect dream world and in the play there are often parts were he cheers up and seem to be all hopeful. But since this hopes are all unrealistic they just get destroyed over and over again. So after every glory vision for example when Biff and Happy are planning to open her own business “the Loman brothers” (p.50) the break down comes for sure. Towards the end Biff tries to break trough these lies after never telling “the truth for ten minutes in this house” (p.104) and confronts his father with the truth.

But even after this first honest conversation between father and son, Willy does not change, but sees suicide as his last way. Overall his inability to face the present, his force hide behind his lies show how desperate he is, how he can not accept his failure. Compared with Charley and his son Bernard his failure becomes even more obvious. Charley who is living next to the Lomans has success in his life, he has a good working company and Bernard has succeeded, too. Miller uses this example in his book to show that the “American Dream” Willy Loman was so eager to achieve, could be achieved. Charley is successful because he did not get lost in his dreams and he did not expect his son to be the greatest businessman in the world and gave him the wrong impression of the world he lives in.

For the better understanding of Arthur Miller` play it is necessary to think about his background. His father came originally from Austria and moved to America in a time where the myth of the “American Dream” was very popular. In these times the people believed that anyone could become someone. Wealth and status were the most important things in the world. Miller was taught that trough hard work everybody could improve these two things. In his play “death of a Salesman” he criticises this system and the American way of thinking about what is important in life and what is not.

Furthermore Miller suggests that the whole American society is chasing after an impossible dream. It is also very interesting to look closer about the discussion if “Death of a Salesman” is a tragedy or not. Miller himself said probably the best statement about this discussion: “I did not write a tragedy, I just wanted to show the truth how I saw it”. However Miller definitely touched new ground with his tragedy. First of all, because he neither did nor choose a noble person to be his main character but a normal person anybody could be. And this is actually the tragic Miller wants to show us that this could be anybody, that Willy`s failure is human.

In the end I would say that Willy Loman is a character one could feel sympathy for since he is a tragic person. Instead of doing what he would be good or what he likes, he can not stop dreaming about being a successful salesman even though he might would have reached all the things he wanted to achieve for instance being liked (p. ). Furthermore I would suggest that he had the wrong values. If he would not have been so eager to follow his brother Ben who achieved great wealth trough finding diamonds, which alludes once again the American Dream, not only he himself would be happier, but also his sons would have had a better change for a good life.

To What Extend Does Miller Portrait Willy Loman as a Sympathetic Character?. (2017, Jan 24). Retrieved from https://studymoose.com/to-what-extend-does-miller-portrait-willy-loman-as-a-sympathetic-character-essay 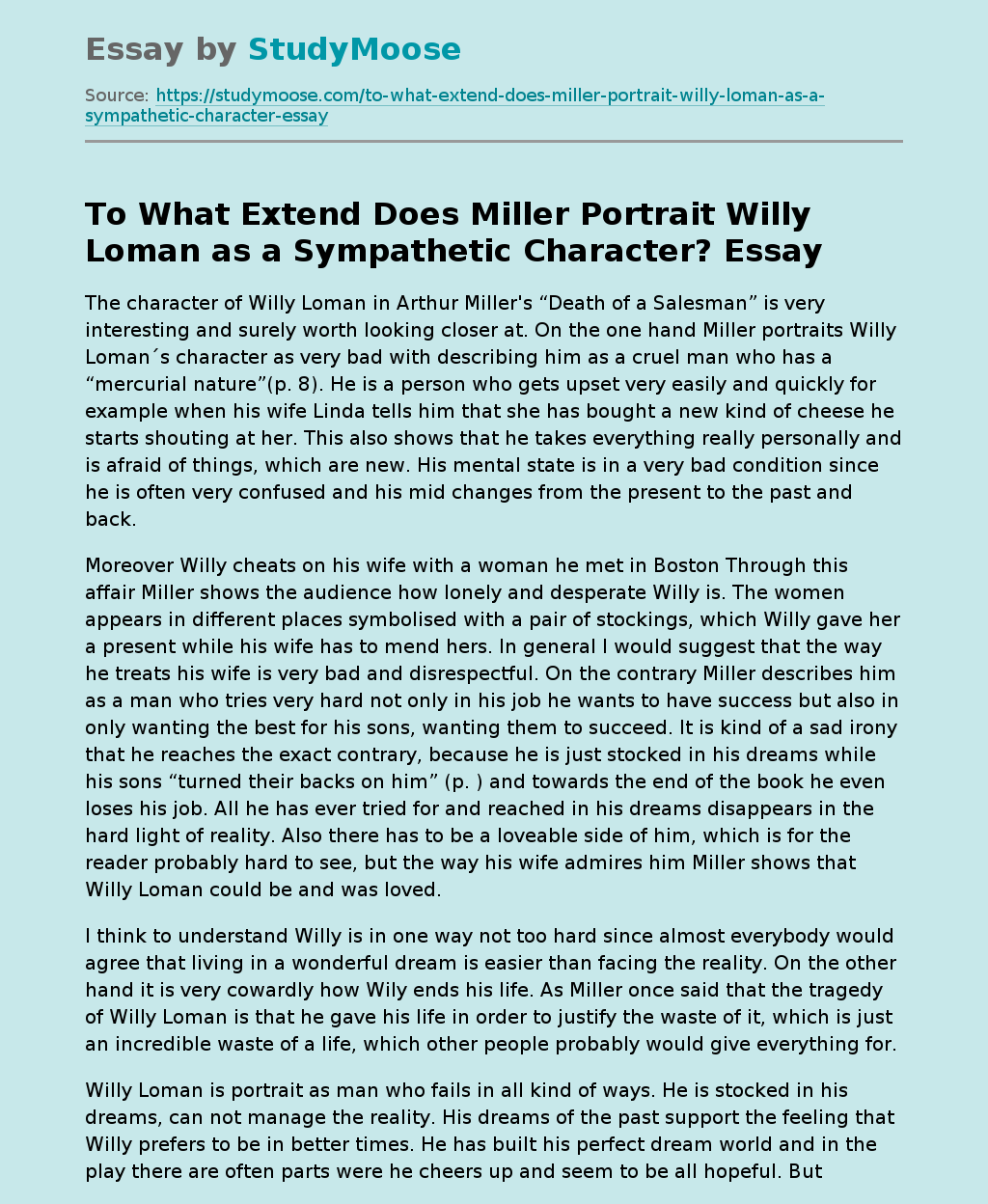