To Play or Not to Play Video Games

They love the graphics in this game called shadow of the colossus remastered on the ps4.

Don't use plagiarized sources. Get your custom essay on
“ To Play or Not to Play Video Games ”
Get custom paper
NEW! smart matching with writer

S is shooter games, so maybe you could play the most popular genre. The best game in the u.s. Based how many copies sold and how many people did play.

Proficient in: Children And Computer

The graphics of today have improved a lot since 1952.WOW is also the most grossing game which means brings in the most money.(the very first game is below) Graphics in the game Evolution.

This is a 2017 game see how it looks realistic? Now, I will give you the worst game.Can you see how this is the worst game, I can. As you can also see the evolution of games from the assasins creed in 2007 to 2017. You can see how it has upgraded since 1970 a 50s. What happens when you play violent video games to long I will tell you.if your children play violent videoA mix of how many hours gamers play.It seems like most people play every day. Gamers spend at least 13 hours playing video games. Gamers play a video game or more a week.

What is the best amount of time for people to play games daily? Scientists say that you should stay at 1-4 hours daily to stay happier than kids that play more often. many parents say so you can limit them to 1-4 hours a day at most they can play 28 hours a week 7 hours a least.

So you can limit them but don’t limit too much or they will not be as social or have a great satisfaction with life.but then what kids say is true they do have benefits unless they play too much.so kids should be able to play video games for benefits over people without video games.so kids if your parents say don’t play video games you can tell them that it helps you if it’s limited to a certain time 1-4 hrs only! A day. Parents let your kids play but only for 1-4 hrs a day.sometimes if children play violent video Bad violence, and the good amount of hrs to play video games.the violent games would be bad for your children as I will mention latergames they can be rebellious and take more risks.they can also become avid to video games, like gunman an elementary school kid.now a quote from Shaun “There are plenty of skills I’ve learned from playing video games.

It’s more interactive than watching TV because there are problems to solve as you’re using your brain.” so there I leave my statement like that video games are good for you, in some ways.

To Play or Not to Play Video Games. (2021, Dec 02). Retrieved from https://studymoose.com/to-play-or-not-to-play-video-games-essay 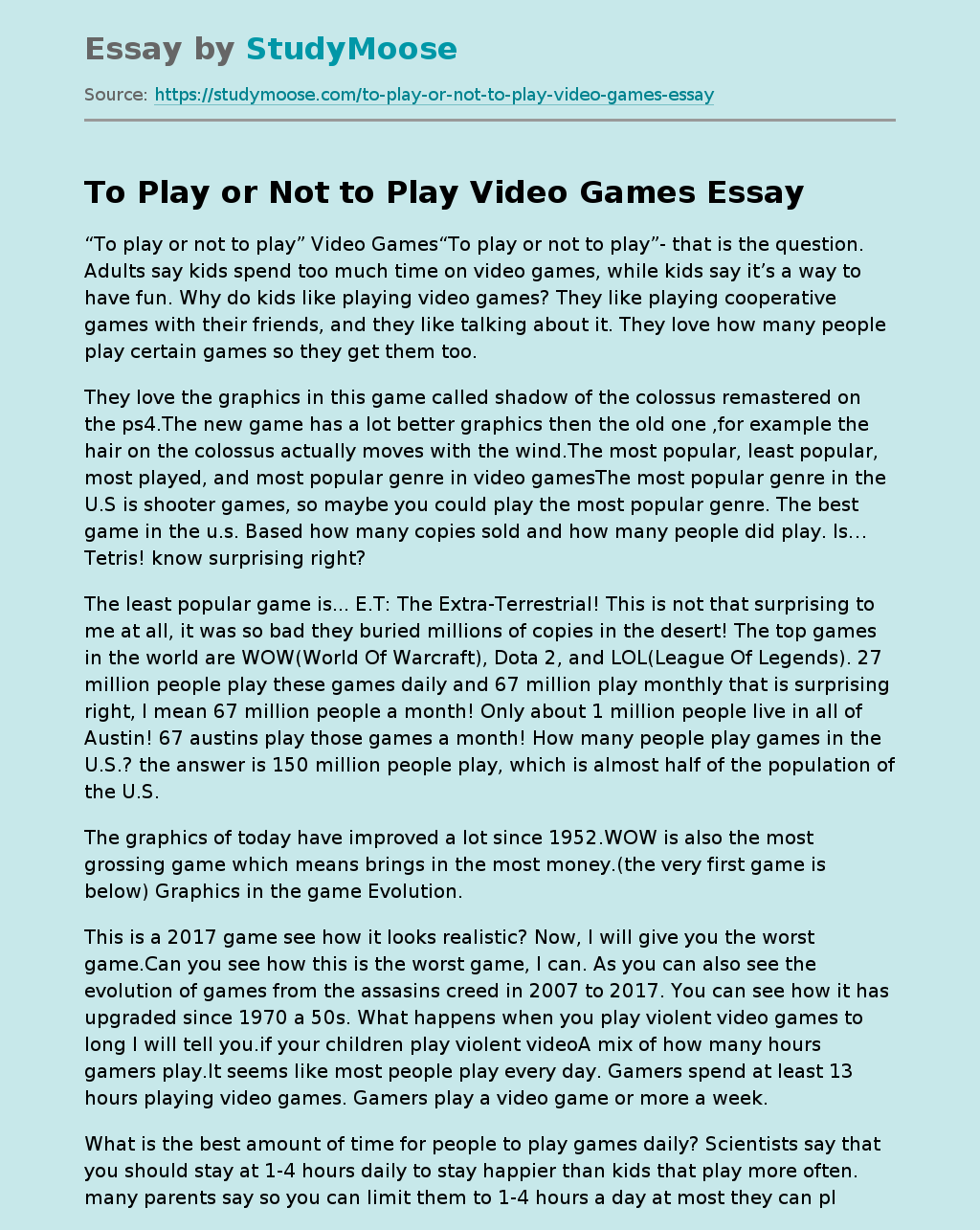