To Kill a Mockingbird- the Addressal of Discrimination

Racial injustice and discrimination has been prevalent in various parts of the world since a very long time. It has led to a devastating impact and has also changed the course of mankind. It is mandatory to understand that it continues to exist, callously and mercilessly. Despite the comprehensive legislative laws existing in every country for the emancipation of racial discrimination, it is recurring at a substantial rate. ‘To kill a Mockingbird’ is a novel progressive in its time but propels racial injustice and discrimination at subsequent levels in the text.

Don't use plagiarized sources. Get your custom essay on
“ To Kill a Mockingbird- the Addressal of Discrimination ”
Get custom paper
NEW! smart matching with writer

The primary theme of this novel is racism, justice and courage. It focuses on inhuman treatments and unjust to blacks. However, the text mentioned in the novel is inclined towards racism and discrimination in its very essence. It speaks about the blacks from the perspective of the white people, more specifically, a young white girl, which is simply inefficacious and purposeless. It is a futile attempt at spreading awareness about social issues, such as racial tension and discrimination.

However, the novel also captures the basic fundamental nature of ethics, moral principles and acceptance. It talks about social reform that aims at gradually altering the mindset of the society, through the subsequent chapters in the book. It breaks the cultural and psychological barrier as it narrates about the lives of both ‘blacks’ and ‘whites’ living together in United States of America. “The novel is an account of an awakening to good and evil, and a faint catechistic flavor may have been inevitable.

But it is faint indeed; Novelist Lee’s prose has an edge that cuts through cant, and she teaches the reader an astonishing number of useful truths about little girls and about Southern life” (Kedmey, 1960) The author, Harper Lee also appeals to the empathetic side of the reader as it describes the development of the character, Scout who initially didn’t understand the overriding value of an individual in a black community. It is a teaching narrative and also a quest to understand the relationships in the society. It reflects massively on the harsh reality of America, where, till date, hate crimes and discrimination on the basis of race exist. The novel meticulously captures the cruelty faced by the black individuals and how they are deprived of the equal opportunities that they rightly deserve. Comparatively, it can be said that Harper Lee has left several instances, up to the reader’s interpretation so that they can unravel the details of such gruesome incidents of torturing blacks. “The book adopts a rigid, neatly applied, internal hierarchy of race, class and character” (Holocomb, 2002)

‘To Kill a Mockingbird’ unfolds the unjust legal system binding in Alabama. Despite possessing the knowledge of orthodox thoughts regarding the black community and having the knowledge that representing a black man in a trial, would result in social isolation and mockery of the lawyer, Atticus nonetheless represents Tom Robinson in a case regarding false accusation. Evidently, Atticus and his family had to suffer the end-result of such an act that was majorly disapproved and were criticized by the white individuals of the society. This scene suggests that white lawyers, and their families, also risk physical violence when advocating for black criminal defendants. In real life, the local white lawyers who represent black clients often suffered financial loss as well as social seclusion. “Through the treatment of Tom Robinson and the children’s subsequent struggle to come to terms with the racist views of their neighbours, the readers are reminded of how easily one’s views can be shaped by culture and how important good role models can be (Jonathan, 2016). The description of his representation by a white lawyer and the jury, comprising of only white members, reveals the legitimacy of the fundamental thinking and stereotypes of the conservative society. It is of paramount importance to understand that there are various forms of discrimination that was highlighted in the novel. Moreover, though it seems trivial, on the face of it, it is clear that discrimination manifests from the roots of the society and is applicable to not only the black individuals but also covers those who are different from the rest, even in the slightest manner. For instance, Scout is ridiculed for not conforming to the norms of the society. Mr Dolphus Raymond, though is a well off white man, is also judged and looked upon, simply because he is married to a black mistress. His traits are subjective and he fails to have a separate identity of his own. The black members are used as narrative devices. Moreover, the Ewells are also discriminated against because they belong to the lower strata of the society and are uneducated. “Which, gentleman, we know is lie, as black as Tom Robinson’s skin” (Lee, 1960). Lastly, as the novel is based on the theme of racism, it is of extreme significance to understand that the discrimination faced by Tom was simply unfathomable then and in the modern times as well. Throughout the novel, however female voice has emphasized Scout’s growing distance from her provincial Southern society and her identification with her father, a symbol to be empowered.

Even though To Kill a Mockingbird is a reflection of the ruthless conduct faced by the blacks, chiefly because of their colour, the author has also been severely criticized for involuntarily expressing discriminatory behaviour and misconduct in the novel. “The United States found in ‘To Kill a Mockingbird’ was unquestionably a more racist, oppressive America, deaf to the desires and hopes of women, homosexuals, minorities and nearly anyone who did not fit the prevailing definition of ‘normal.” (Gay, 2018). Until the climax, the young girl forms her own perception of Boo Radley and Dill, on the basis of the mindsets of her surroundings which was extremely unkind to them and the entire black community. She considers him to be different unlike them, as he is not accepted into the society easily. The preponderance of the readers are left to believe that Atticus was empathetic and disregarded racism. Despite, the disapproval of the society, he represented Tom Robinson for the trial. However, the truth is that Finch did not volunteer to represent Tom Robinson. He was the appointed counsel and became Robinson’s lawyer only when asked by the local judge to take the case. Thus, Atticus did not fight the case because he was against racism but was bound by the law to do so. The usage of the term ‘Nigga’ has been used profoundly in the novel, to capture the various events of discrimination. It is not the most appropriate word to use to describe the prejudice existing in the society, since the word is highly offensive and has been banned in different countries. Even though it claims to represent the status of black people, there was no momentous information on the prevalent status of the blacks that existed in Alabama apart from the representation of a black criminal by a white man When it comes to the aspect of woman, Southern women are ridiculed as gossips, provincials, weaklings, extremists and even racists in the novel (Shackleford, 1996). In the novel, it has been prescribed that the popular thinking of the society, towards women is harsh and cruel, which is definitely not the case. Secondly, to consider women as ‘delicate’ and ‘soft tea cakes’, is a very broad generalization to make. The author has overlooked the status of women, who were actually flourishing in their respective fields like Calpurnia and Miss Caroline.

Seeing both sides of the argument, it can be inferred that ‘To kill a Mockingbird’ is a very progressive novel. Though, it portrays the harsh reality of life for Blacks in the American society, it is written from the perspective of a young girl, as a result of which the novel comprises a lot of casuistries and fallacies. It is quite evident that a lot of significant substance is missing out in the novel, since a child has a vivid imagination and fails to understand the actual difference between reality and imagination. Moreover, it displays extreme levels of racism, specially with the usage of prohibited terms such as Nigga. The theme of the novel, To Kill a Mockingbird is essentially written to capture the actuality of pre-modern times. However, the novel is extremely biased in nature and should not be used as a tool to spread awareness about racial discrimination and unjust.

To Kill a Mockingbird- the Addressal of Discrimination. (2021, Feb 18). Retrieved from https://studymoose.com/to-kill-a-mockingbird-the-addressal-of-discrimination-essay?post 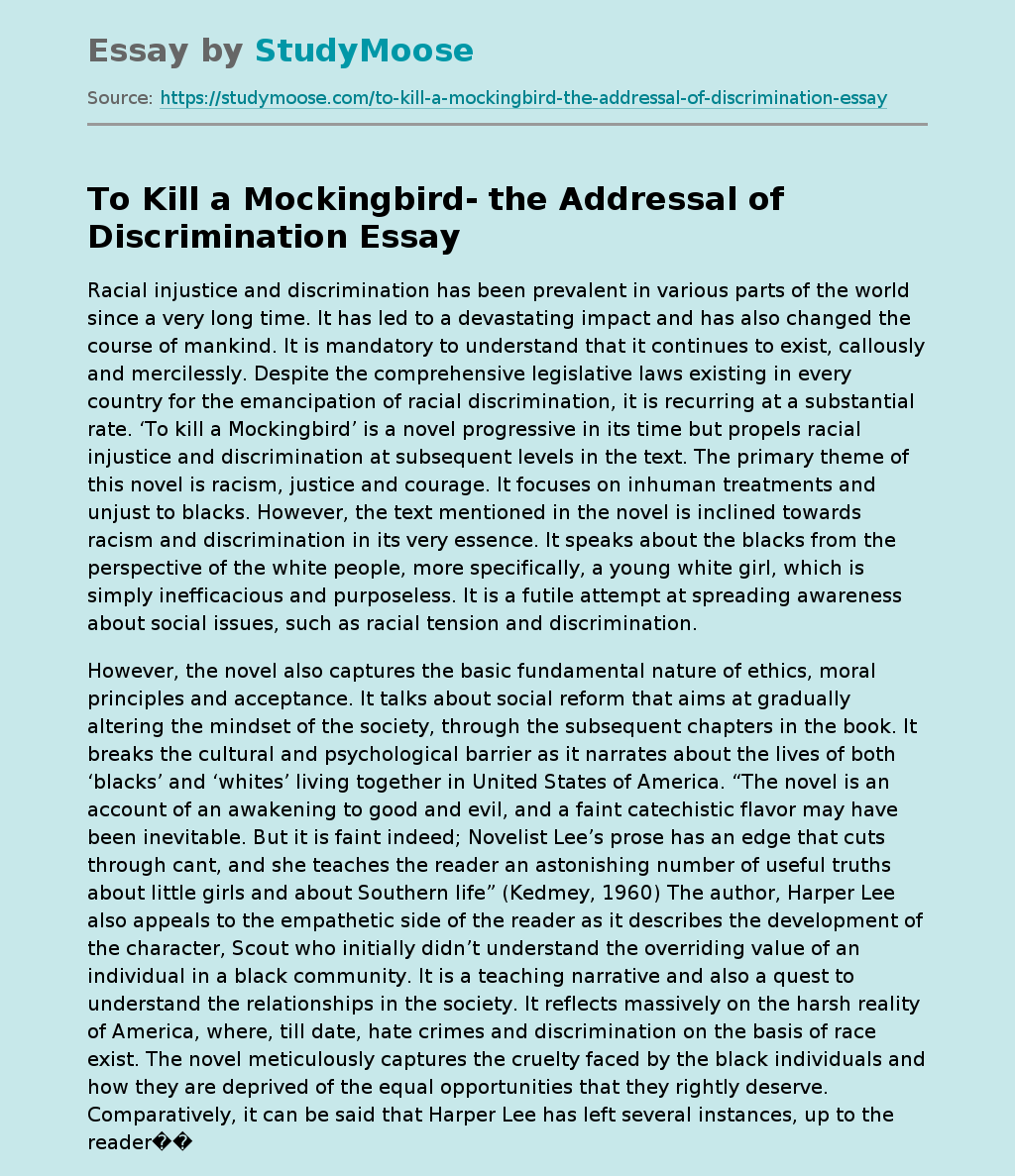