To Kill a Mockingbird Social Pressures

In the 1930’s, especially in the south, society centered around a kind of unwritten social code, and to break it is to be shunned from said society. In To Kill a Mockingbird, by Harper Lee, many of the characters are affected by these social pressures in different ways. Mayella Ewell gives in to societal pressure by covering up her “mistake” with Tom Robinson, while Dolphus Raymond goes against it and has a happy relationship with an African American wife and mixed children.

Don't use plagiarized sources. Get your custom essay on
“ To Kill a Mockingbird Social Pressures ”
Get custom paper
NEW! smart matching with writer

Mayella Ewell was an incredibly lonely woman, she had no friends, and had to basically be the mother to her siblings. When Tom Robinson comes along, she sees an escape. She tempts Tom and, realizing what she’s done, she frames him for her dad’s beating. During his speech, Atticus says, “She has committed no crime, she has merely broken a time-honored code of our society, a code so severe that whoever breaks it is hounded from our midst as unfit to live with… she knew full well the enormity of her offense… she must destroy the evidence of her offense” (271-2).

Mayella didn’t do anything illegal, just broke whatever twisted “moral imperatives” the town had, and knowing she’d be cast out if the town found out, she “destroyed the evidence” by accusing him of rape. Atticus tells the jury, “she struck out at her victim- of necessity she must put him away from her – he must be removed from her presence, from this world.” (203-4). Mayella felt that Tom wasn’t a person who could suffer or die, just evidence of what she’d done, so she had no issue testifying falsely against him to save her reputation.

Dolphus Raymond was the town “drunk”. Everyone thought he was an alcoholic and therefore had no idea what he was doing having a “colored woman and mixed kids” (214). Despite their assumptions, he wasn’t ever drinking alcohol, just Coca-Cola. During the trial, Dolphus explains to Scout, “Some folks don’t – like the way I live… I try to give ‘em a reason, you see, it helps folks if they can latch onto a reason… they could never understand that I live like I do because that’s the way I want to live” (268). Dolphus explains that in order to get people to not judge him, he pretends to be drunk, to “give ‘em a reason” because otherwise they wouldn’t understand. Especially since, unfortunately, people tend to hate what they do not understand.

Social rules and pressures ruled the south in the ‘30s. While Mayella gave into social pressures, she was in the end unhappy. She also basically signed the death sentence of an innocent man in the process. Conversely, Dolphus goes against society’s laws and has a perfectly happy relationship. They’re both excellent examples of how society can impact ones actions.

To Kill a Mockingbird Social Pressures. (2016, Jun 04). Retrieved from https://studymoose.com/to-kill-a-mockingbird-social-pressures-essay 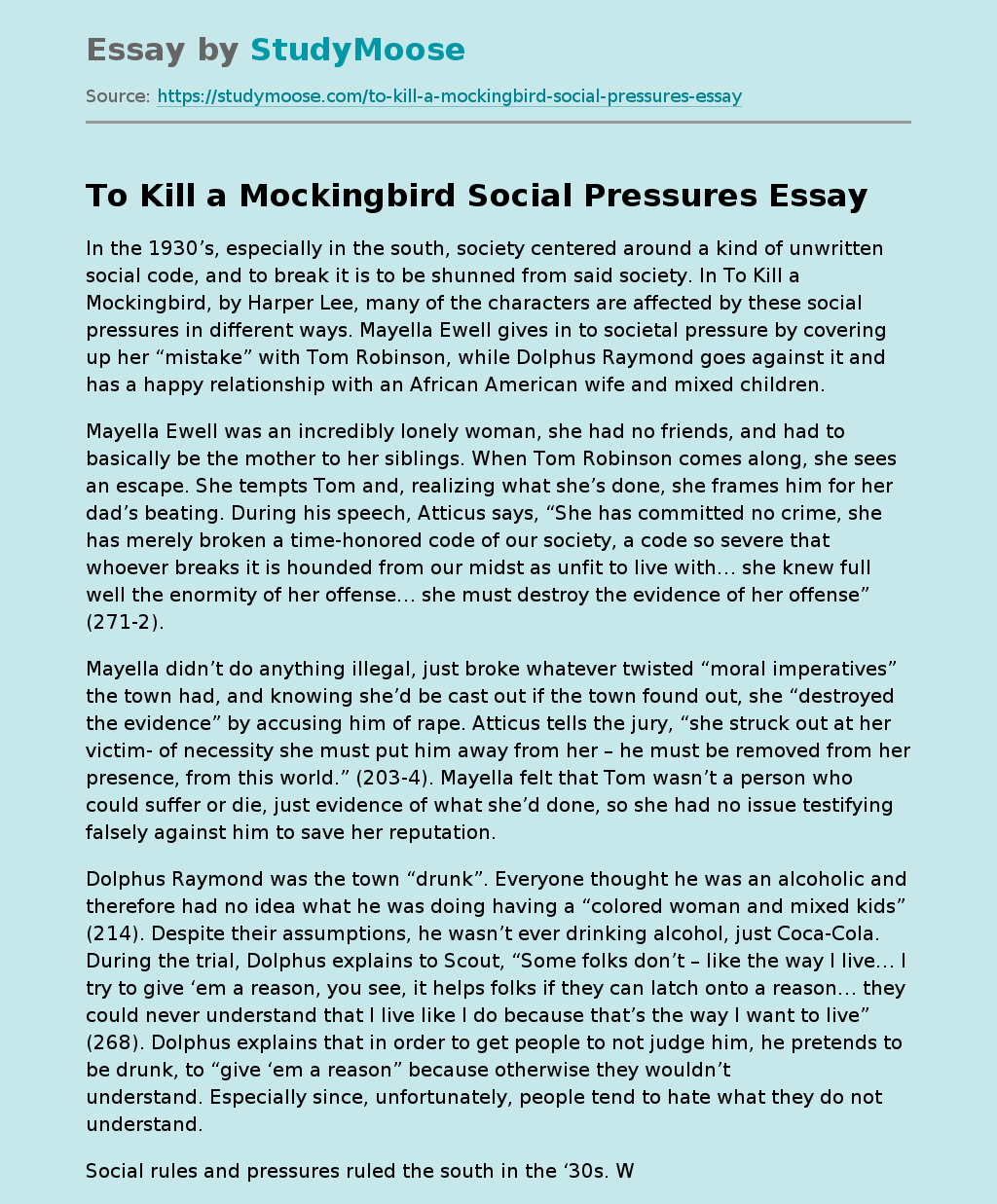