To Kill A Mockingbird Racism and Scottsboro Boys

Don't use plagiarized sources. Get your custom essay on
“ To Kill A Mockingbird Racism and Scottsboro Boys ”
Get custom paper
NEW! smart matching with writer

The Scottsboro Trials was a sad tragedy that took place in Alabama during the 1930s.

While nine black youth, ages from 13 to 21, were on a train heading to Memphis, Tennessee to find a job, a fight between the nine black youths and a group of white men started. After the white men were kicked out of the train, they reported what had happened to a stationmaster, and the station master stopped the train at a town called Paint Rock.

After the train stopped, a group of policed jumped on the train and arrested the nine black youths. When they are caught on the train, two white women, dressed in men’s clothes, were found hiding on the train.

Then the two white women accused the nine black youths raping them without any evidence. Because raping in 1930s in the Deep South was a big crime, so many trials started. At the end, every one of the Scottsboro Boys were sentenced to death except for the youngest one, Roy Wright, who was 13 years old.

The reason why the jurors did not sentence him to death is because of his age. Although he was not sentenced to death, he was still sentenced for spending his life time in jail (The Scottsboro Case (1931)) (Lanset). Maycomb, Alabama is the main setting that the book, To Kill a Mockingbird, took place.

The first case took place during April 1931, and it was taken to the juries around three pm. For less than two hours, the juries announced the verdict, death penalty; after the crows outside heard it, they yelled of approval. Also, the juries also warned people who were in the courthouse that there must be no demonstration staged after the verdict, so the people in the courtroom just applauded, while people outside cheered wildly. The second trial that was held on April 8th, for eighteen-year-old Haywood Patterson.

Then the jury announced a verdict of death penalty within three hours. The third case was tried with five boys; Olin Montgomery, who was seventeen and nearly blind, Andy Wright (18 years old), Eugene Williams (17 years old), Willie Robeson (17 years old), and Ozie Powell, who was 16 years old. During this trial, Willie RObeson was suffering from a bad venereal disease, so it was pretty much impossible to rape somebody with that disease. However, the case went to the jury at four pm, and next morning, the verdict was still a death penalty.

During the trials, Governor Benjamin Miller even sent the Alabama National Guard to Scottsboro to prevent a death sentence, but at the end, eight of the Scottsboro Boys were still sentenced to death, except for the youngest one, Roy Wright. Although Roy Wright wasn’t sentenced to death, he was still sentenced to be in jail for his whole life (Linder) (Salter). All the trials of Scottsboro started pretty much because of discrimination. On June 22, 1933, Jude James Horton was convinced that Victoria Price was lying because all her stories were inconsistent; also, she had no witnesses and medical evidences for her claims too.

Another person, Dr. Lynch, who asked to talk to Horton privately, said that the girls were lying too. As a result, Judge Horton took his verdict of death penalty back, and announced that there will be a new trial. Attorney General Knight also promised that there would be evidences for Victoria Price’s rape story; Orville Gilley, a white boy on the train agreed to testify for the prosecution. William Callahan, a judge whose age is about 75, was going to participate in Haywood Patterson’s next trial on November 1933.

During the trial, Judge Callahan cut off all the questions about Victoria Price’s chastity, character, and reputation. Also, when Leibowtiz queried Price about her probability of having sex with someone other than a Scottsboro Boy, Judge Callahan stopped him. He did these because he wanted to debunk this event off the American’s newspaper. Similarly to the Scottsboro trials, Tom Robinson’s trial in To Kill a Mockingbird also started because of discrimination. Mayella wanted to protect her dad, so she accused Tom, an African American, of raping her.

She accused a black guy because she knew that in a fight, white men always win (Linder). The Scottsboro Trials incident had impacted the community’s racial climate and the ideologies during the 1930s. Firstly, it had forced the country to look back to their racial practices although white men disliked black men. Secondly, the African Americans changed from republicans to democratic community. Thirdly, the Scottsboro Trials made black men realize how badly the white men were treating them. For example, racial practices and how they were looked upon by law.

Lastly, it also changed the way the legal system of the United States is viewed. Because of the Scottsboro Boys, the African Americans learned to fight for their rights… (Ross) (Scottsboro Boys Hist2081) The discrimination between African Americans and white men was the reason why the Scottsboro Trials and the trial in To Kill a Mocking happened. Although black men lost in their trials, they later realize their power, and started to fight for their rights. The Scottsboro Trial is an event that impacted the whole world, especially America, making them realize several things they had done wrong, and to never repeat it again.

To Kill A Mockingbird Racism and Scottsboro Boys. (2018, Jul 07). Retrieved from https://studymoose.com/to-kill-a-mockingbird-racism-and-scottsboro-boys-essay 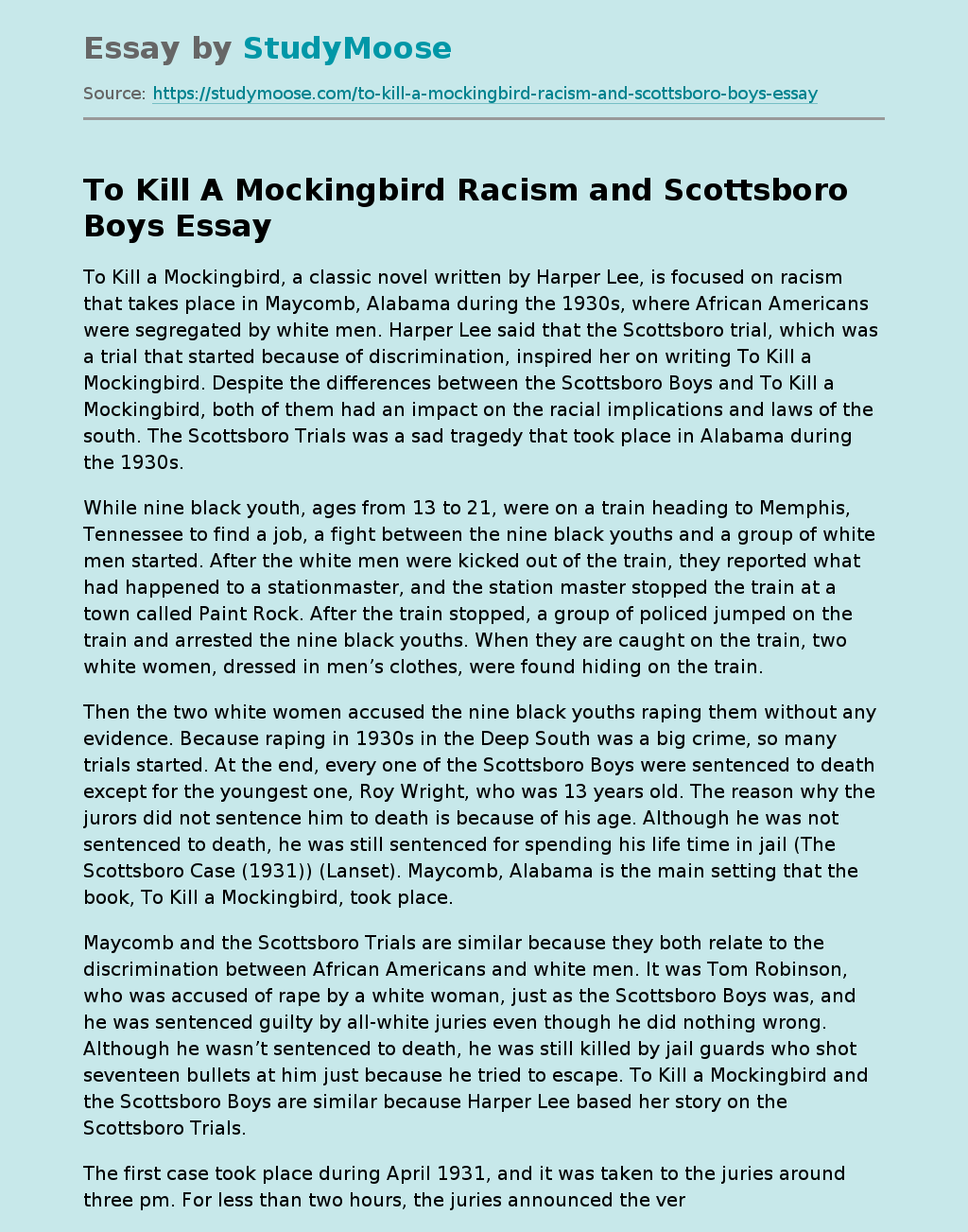