To Kill a Mockingbird Moral

The depth behind this novel is too see how Scout has progressed throughout the course of two years. Slowly but surely, she realizes the life lessons that have been waiting for her all along. She does this with the help of her family and her community. One man importantly sticks out the most, and his name is Arthur Radley, but Scout and the children like to call him ‘Boo’. Lee incorporated Mr. Radley to really show Scout the important lessons of life through the experiences and the encounters she faces with him, while also helping her grow into maturity.

Don't use plagiarized sources. Get your custom essay on
“ To Kill a Mockingbird Moral ”
Get custom paper
NEW! smart matching with writer

In the beginning, Atticus says “You never really understand a person until you consider things from his point of view… –until you climb into his skin and walk around in it.” (Lee 30). Boo Radley helps Scout realize the lesson her father is trying to teach her in a copious amount of ways. First off, the children believe that Boo Radley is the child-eating monster, when in reality he is not.

He turns out to be quite the opposite to Scout’s suprise. Boo does this by leaving the pennies and bubblegum in the hollow of the tree for Scout and Jem as a gift, yet not revealing that it was him. Also, when Scout, Jem, and Dill all try to peep into the Radley house, Jem gets his pants stuck on the fence and Boo sews them back up for him.

Surprised, yet still weary of Boo, Scout still hasn’t completely walked around in Boo’s skin for her to see what a good person he is… yet.

When Miss Maudies house catches on fire that cold night, Boo comes up behind Scout and puts a blanket on her. Scout in fear pays no attention to the blanket and runs away. Even though Scout doesn’t recognize the kind acts that Boo is paying her, all these things help her realize the lessons of the novel at the end. If it weren’t for Boo and his encounters with Scout, she wouldn’t understand the meaning of stepping into someone else shoes, and seeing things from their point of view.

The second lesson that Boo helps teach Scout is the meaning of a mockingbird, and how a mockingbird can be the personality and heart of a person. Mockingbirds are the only birds that Jem and Scout aren’t allowed to shoot with the rifle by Atticus’s words because it is a sin to kill a mockingbird. Miss Maudie explains this later by saying “Mockingbirds don’t do one thing but make music for us to enjoy. They don’t eat up people’s gardens, don’t nest in corncribs, they don’t do but one thing but sing their hearts out for us. That’s why it’s a sin to kill a mockingbird.” (Lee 10). This correlates to when Bob Ewell tries to murder Jem and Scout, until Boo saves them and winds up killing Mr. Ewell himself.

Later, the Sheiff explains that he does not want to make Boo out to be a hero or publicize him, so they use a cover story instead. The Sheriff knew this would be a bad idea because he is such a recluse, and doesn’t want him to have to justify himself to the public and face ridicule. Atticus explains this to Scout, and she says she understands because it would be like shooting a mockingbird. At this point the maturity is shown and she has just applied one of the lessons, thanks to Boo Radley. She realizes that Boo has never actually harmed someone (opposite to the rumors) and has done nothing but looked out for her. She now realizes that people can be mockingbirds too.

At the very end of the novel, when Scout walks Boo home across the street, she is standing on his porch. She remembers what her father said about standing in someone elses shoes and she says “Just standing on the Radley porch was enough.” (Lee 31). From his perspective she can see the town and her house right across the street from it. She realizes how he protected them and watched out for them. If it wasn’t for Boo, she would’ve never started looking through the grown-up perspective. The lessons that Atticus was trying to teach her wouldn’t have been applied, and Scout wouldn’t know how a person could symbolize a mockingbird. She says to Atticus “…he was real nice…” and Atticus replies “Most people are, Scout, once you finally see them.” (Lee 31).

To Kill a Mockingbird Moral. (2016, Dec 17). Retrieved from https://studymoose.com/to-kill-a-mockingbird-moral-essay?post 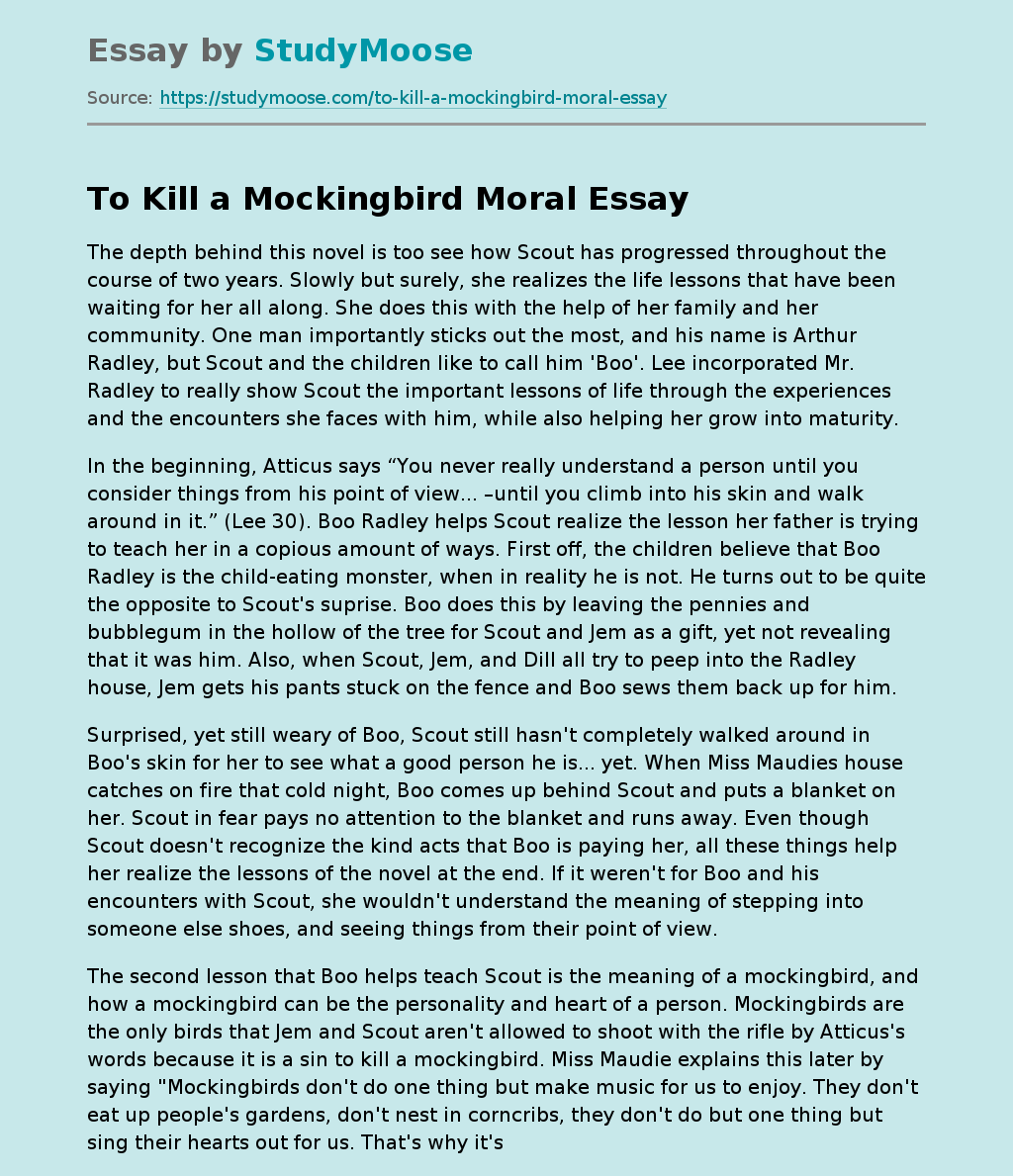