To Kill a Mockingbird is Still Highly Valued as a Novel

When Harper Lee first wrote her timeless novel, To Kill A Mocking Bird, it took the world by storm, detailing and highlighting many significant issues that had previously been ignored by most sections of American society. It shed light on many crucial issues that have clearly influenced our understanding of serious concerns in regards to the themes of morality and racial prejudices. The novel is read from the point of view of a young girl named Scout living in a small town in the south of America and follows her as she gradually begins to mature and see the world from a new light.

Don't use plagiarized sources. Get your custom essay on
“ To Kill a Mockingbird is Still Highly Valued as a Novel ”
Get custom paper
NEW! smart matching with writer

By highlighting crucial flaws in society, Harper Lee has written her novel in a way that makes it still relevant and highly valued as a novel in 2019.

Racial prejudice has been prevalent throughout history. The discrimination of a person based on their ethnicity or skin colour still makes global headlines today. Harper Lee set her novel in a time where racism was an everyday normality.

This theme is woven throughout her novel. In chapter 10 for example, Tim Johnson, the dog that had been considered the town’s pet, is seen roaming the streets, sick and agitated. This rabid dog represents the town’s madness and their fear of racial difference. When it’s running loose on the streets, the townsfolk hide in their houses with their windows and doors shut. This symbolises how ignorant they are to their racist prejudice. Harper Lee incorporates strong visual imagery into her writing creating a vivid picture in the reader’s mind of what the dog would look like “We could see him shiver like a horse shedding flies; his jaw opened and shut;” This extract strikes an element of fear and stress into the heart of the reader, causing them to become more emotionally attached to the scene and to empathise with the townsfolk.

The personification of the dog and its actions is what allows us to see it as a representation of madness and discrimination and helps to highlight the effect racial prejudice has on all forms of society.

Morality, by definition, is the distinction between right and wrong or good and bad behaviour. For Scout, behaving morally becomes a necessity for her to survive the prejudiced society of Maycomb. Scout’s mature understanding of the moral dilemmas described in the novel helps her to become a noble individual in an unjust social order. Whilst her age and gender make it harder to form her own opinions, Atticus guides her in the importance of morality and equality. In chapter 30, Scout states “Well, it’d be sort of like shootin’ a mockingbird, wouldn’t it ?”. In this, she is referring back to a statement her father had made earlier in the book, explaining how it is considered a sin to shoot a mockingbird. This shows that Scout has picked up her father’s approach to life and his ideals by following in his moral footpath. A mocking bird is used as a metaphor for innocence throughout the book. Shooting it would like killing innocence, something that is considered morally abhorrent. Tom Robinson and Boo Radley are two characters whose purity inspires the comparison to a mockingbird. Their goodheartedness without expectations of reward made them the mockingbirds of Maycomb.

Harper Lee discusses the themes of morality and racial prejudice in great detail through the effective use of literary techniques that draw in the attention of the reader. She successfully captivated her audience and brought a deeper understanding of the complex concepts present. The way the novels addresses the social inequalities affecting humanity at the time it was written continues to have a lasting impact on modern-day readers. This is why To Kill a Mockingbird is still highly valued as a novel in 2019.

To Kill a Mockingbird is Still Highly Valued as a Novel. (2021, Feb 18). Retrieved from https://studymoose.com/to-kill-a-mockingbird-is-still-highly-valued-as-a-novel-essay 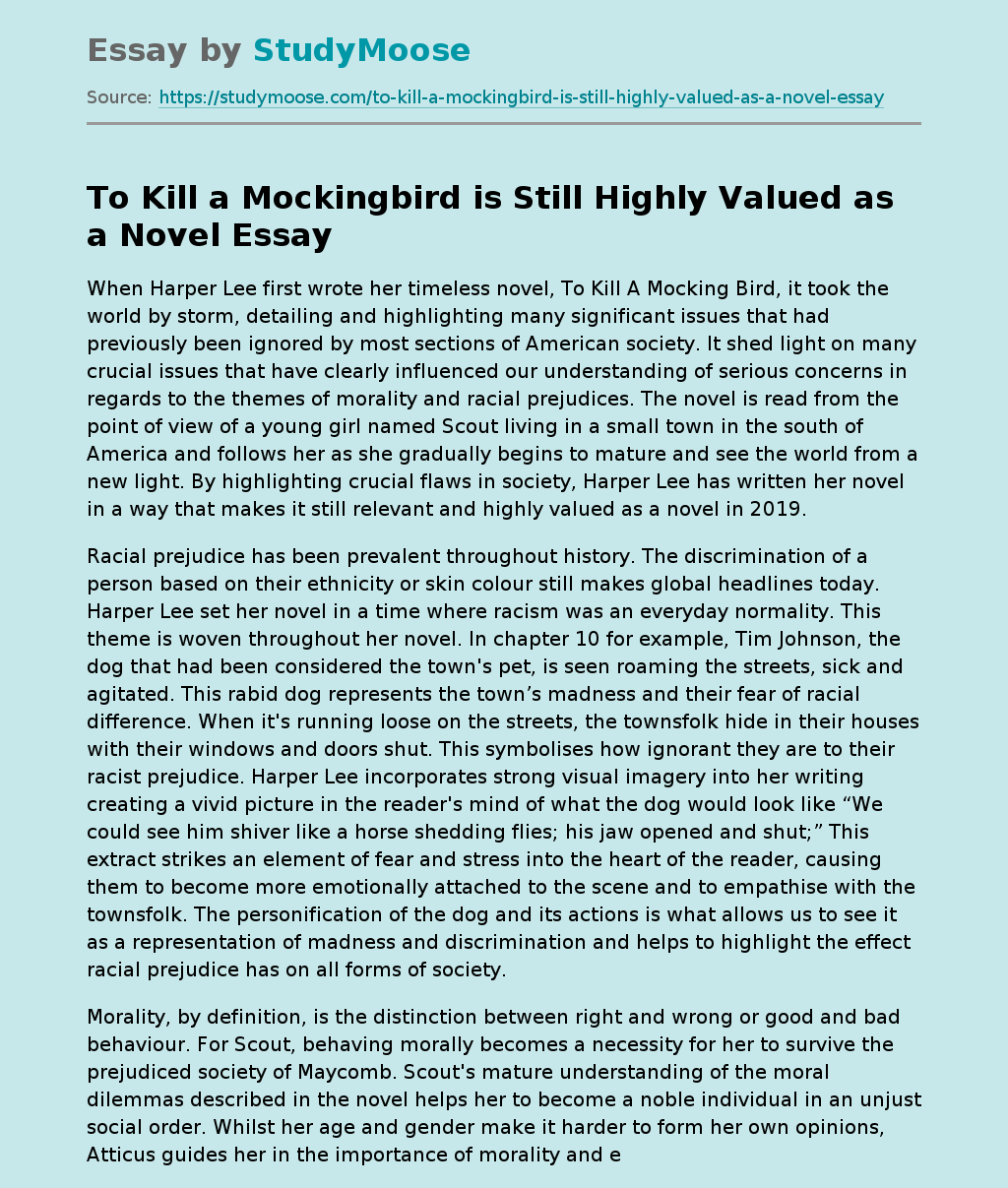