"To Kill A Mockingbird" Essay

The novel To Kill A Mockingbird by Harper Lee takes a reality look at life in the South and 1930s. The trial in this book is affected by setting and changes the result of the trial, Atticus, and how people saw their views of life. Atticus, Scout, and Boo are each affected by a small town attitude, along with the trial and everyone’s reaction to the conviction. There are simple and complex ways that setting affects a story. Anything from results to rumors is changed by setting.

Don't use plagiarized sources. Get your custom essay on
“ “To Kill A Mockingbird” Essay ”
Get custom paper
NEW! smart matching with writer

The setting affects the conflict, character, and mood by creating segregation and a small town attitude.

Segregation in a town can create some problems. It can affect key events of every day life. In Scout’s case, it is the trial with Tom Robinson and Bob Ewell. Mr. Ewell claims that Tom rapes his daughter. Although Tom is convicted, Scout’s father Atticus proves his point in the case showing the Tom does not do anything, but Bob does.

With an all white jury against a black defendant, Tom, segregation is the only obstacle standing in the way of proving him innocent, and so he is guilty. Atticus says, “With people like us-that’s our share of the bill. We generally get juries we deserve. Our stout Maycomb citizens aren’t interested, aren’t interested in the first place. In the second place, they’re afraid…” (p.221), showing how going against conviction, would result in hatred from other people because it isn’t right for someone to agree that a black man is innocent.

This is a conflict that leads to others. Now after the trial, there is a whole set of different problems dealing with Tom. Tom is sent to prison for Bob’s actions. At the prison, an interesting event occurs: Guards say that Tom tried to escape and they are forced to fire at him, and Tom dies. The guards may say that, but there is a possibility that it is not true, and that segregation could have caused them to shoot Tom. Whatever did happen, only the guards know. Segregation changes Scout’s attitude because of what her father does for Tom Robinson. Being called a “Nigger-lover” upsets her. She knows that whoever says it is insulting her father. Another mood change is when Scout and Jem go to a black church, and are immediately insulted by one lady. Scout and Jem became scared because of the fear of segregation against themselves. Being as Maycomb is in the South, segregation is higher than other areas resulting in affects of conflicts, characters, and mood.

Maycomb, a small county of Alabama, has the small town attitude that affects any problems, people, or moods. Along with a small town attitude, comes gossip. Gossip greatly affects problems because of how fast it can spread through a tiny county. No problems with Bob and his trial would have happened afterwards without gossip. Scout says “According to Miss Stephanie Crawford, however, Atticus was leaving the post office when Mr. Ewell approached him, cursed him, spat on him, and threatened to kill him…” (p.217) shows just how serious the problem is. It really shows when everyone gossips about how Tom rapes Mayella making the whole town believe he is guilty. If no one gossips, then they would have just thought it was another case with another black person instead of making it a big problem in the county.

Not only does gossip affect conflicts, it also affects characters. Characters such as Atticus deal with all the gossip coming from everyone in town. Everyone would talk about how he is sticking up for a black man, forcing him to put up with people hating him for his job. Gossip also changes Scout in a simple way. Her father asks her not to touch anyone in school, because she gets in fights repeatedly. This causes the school children to think that she is changing. Although it is a simple effect, it still shows how a small town attitude can affect something so small. Also, a small town attitude changes Boo Radley’s reputation because of gossip of rumors and stories.

Everyone believes that he’s crazy because of the rumors that spread quickly. Lastly, the small town attitude will affect mood. In a small town, everyone knows everyone. If something happens to one person, everyone in the town changes. A good example of this is when Tom is committed guilty, people change their views of life. Now seeing that the innocent can be thought guilty, the town becomes dreary, sorry, and damaged. These moods occur because the town pitches in for their regrets to Atticus in tributes of food and gifts. A small town attitude is all a town needs to change rapidly into a different, and sometimes a better, community.

Segregation and a small town attitude of a setting both affect problems, characters, and moods. Segregation makes changes in the outcome of the trial, how people think of Atticus, and what people think about the trial. The small town attitude changes the importance of the trial, the stress Atticus has to put up with, and it also changes their mood shown by their tributes to Atticus. Segregation is important to the story, because it shows true meaning of unfairness. A small town attitude is important because it shows how fast word will spread and how greatly it can affect even the smallest details. Setting varies in all different kinds of ways, and it also varies in outcomes.

"To Kill A Mockingbird" Essay. (2016, Jun 20). Retrieved from http://studymoose.com/to-kill-a-mockingbird-essay 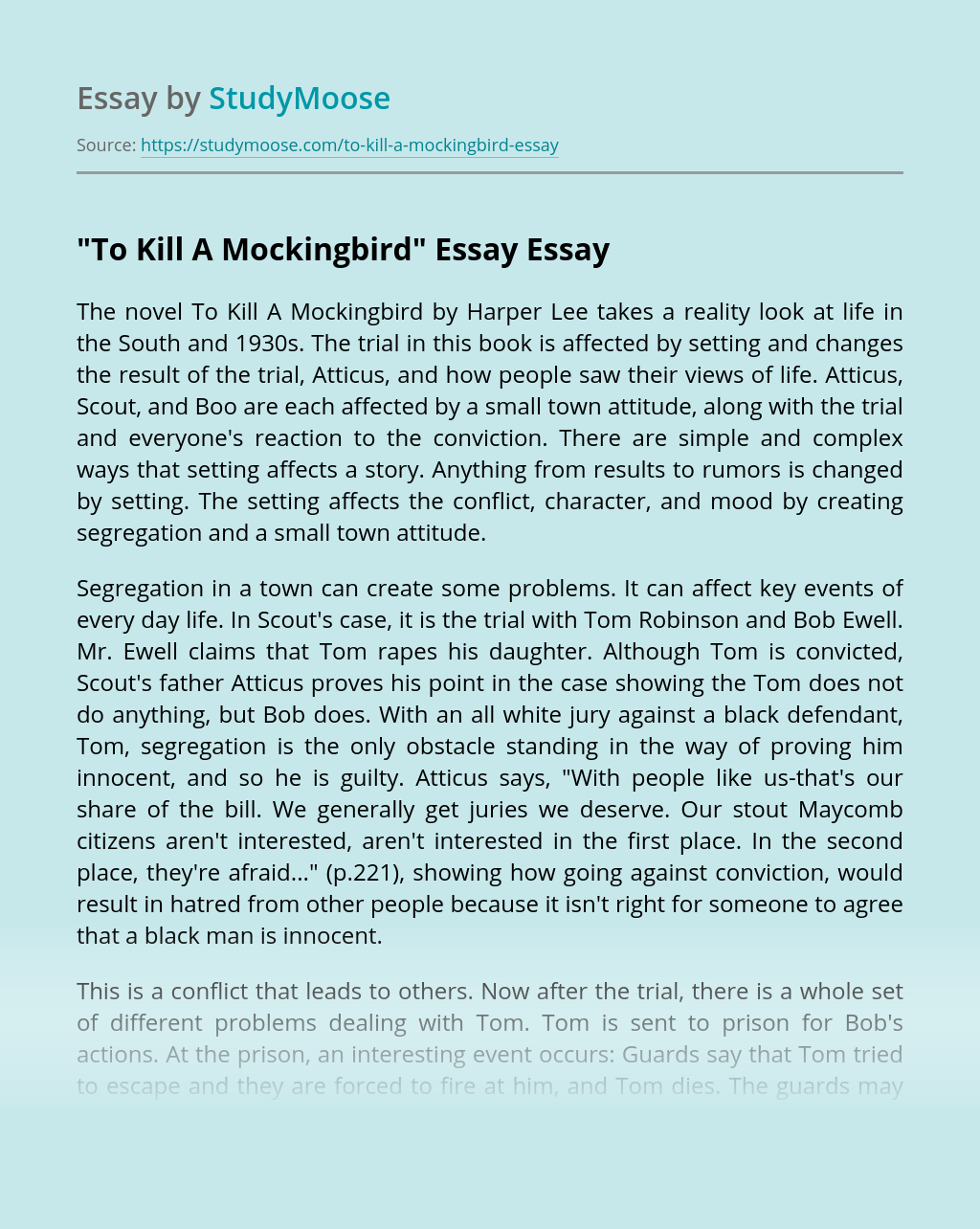