To Kill A Mockingbird Characters

Jeremy Atticus Finch, also known as Jem, is a boy of 13 in the classic novel, To Kill a Mockingbird. He is a curious and mature young man, who has to learn a few lessons along the way. Lizabeth is a young girl who lives in a poverty struck family, in the short story, Marigolds. Lizabeth is allowed to run free and not have to go to school. These two, what seems like polar opposite, characters share many similarities and differences.

Don't use plagiarized sources. Get your custom essay on
“ To Kill A Mockingbird Characters ”
Get custom paper
NEW! smart matching with writer

Lizabeth also lives in the Deep South with her mother, father, and little brother Joey. Lizabeth, a known troublemaker, destroys her neighbor’s, Miss Lottie, pride and joy, her marigolds, out of pure frustration when she sees her father crying. Mrs. Dubose lives down the street from the Finches, who also loves her Camilla bushes, and is crushed, due to Jem cutting the tops of each bud, when she lashes out comments on his father defending a black man.

Due to the many similarities in the two books, both characters loose their innocence and it impacts both stories and how the characters act from then on.

Atticus Finch, Jem’s father, is a successful lawyer, and they live in the richer part of town, and have Calpurnia, their colored nanny, who takes place of his deceased mother. Lizabeth is not so fortunate. She and her family live in a shack, on the outskirts of a town.

Her mother works long hours to keep food on the table, while her father, doesn’t have a job, because he got fired during the Great Depression. Another difference between the two is that To Kill a Mockingbird is told from Scout’s point of view, not Jem’s and in Marigolds Lizabeth is the narrator. When Lizabeth destroyed Miss Lottie’s flowers, she never go punished, instead Miss Lottie was disappointed in her, but when Jem whacked off the Camilla buds, Atticus made him go read to her along with Scout.

When compared and contrasted Jem and Lizabeth are oddly alike. Then when you contrast them they have some huge differences too like Lizabeth lives in a shantytown and Jem lives in town. Both of the characters make a huge impact on the story and how it plays out. The characters are important people to their stories and make the story what it is today.

To Kill A Mockingbird Characters. (2016, Mar 18). Retrieved from https://studymoose.com/to-kill-a-mockingbird-character-esssay-essay 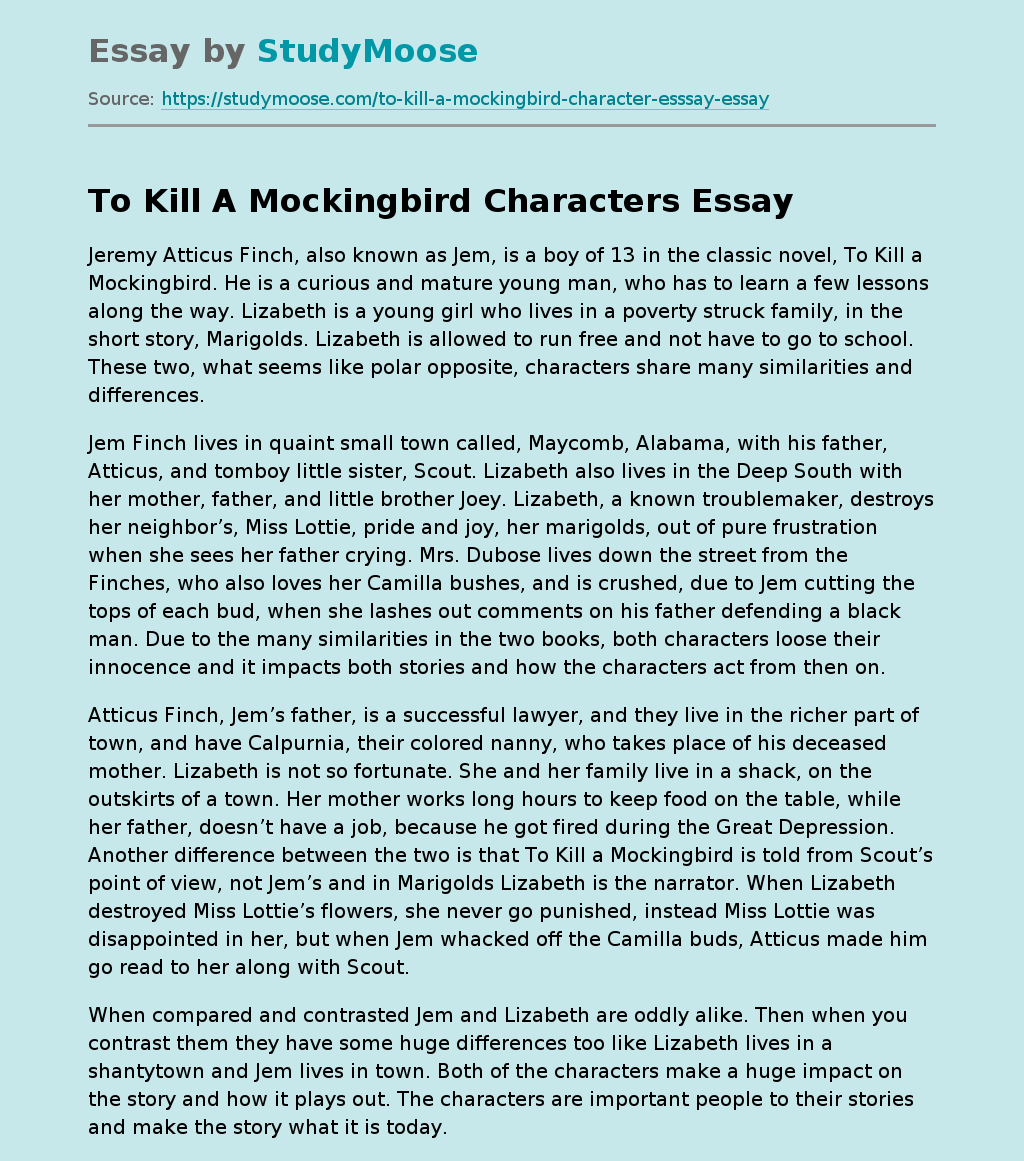