To Kill a Mockingbird Archetypes

One major archetype in Harper Lee’s To Kill a Mockingbird is the quest that the kids try to achieve; to have Boo Radley make an appearance for them. At some points, they even take it upon themselves to find him, deciding one of the ending summer nights to find him “Because nobody could see them at night, because Atticus would be so deep in a book h wouldn’t hear the Kingdom coming, because if Boo Radley killed them they’d miss school instead of vacation” (58).

Don't use plagiarized sources. Get your custom essay on
“ To Kill a Mockingbird Archetypes ”
Get custom paper
NEW! smart matching with writer

This can show that Jem and Dill had decided to put careful planning on their ideas.

If they were going to see him, they decided to make the most of their situation. However, the kids still had a mindful watch for their safety in the worst case scenario. This is extremely evident in their first attempt when Jem “threw open the gate and sped to the side of the house, slapped it with his palm and ran back past us, not waiting to see if his foray was successful” (16).

This allows the author to understand that, while the three kids were curious, they were still scared of whatever might unfold before them should they end up interacting with Boo Radley. This can very well portray how the nature of children will work at times, interrupting their flow of their quest.

Another major archetype in this story is the initiation that Scout, Jem, and Dill go throughout the tale, each at an individual pace. In the beginning of the twelth chapter, Scout goes over how Jem was growing older and how he was “difficult to live with, inconsistent, moody.

His appetite was appalling, and he told me so many times to stop pestering him I consulted Atticus: “Reckon he’s got a tapeworm?” Atticus said no, Jem was growing. I must be patient with him and disturb him a little as possible” (131).

This shows an initiation sequence occurring in Jem, as he now takes personal time to transcend into a higher level of maturity. While it may seem very odd to Scout, the change in character aids in the development of the story. Another moment, this time for Dill, as he is escorted out of the courtroom by Scout, mention how “Mr. Finch didn’t act that was to Mayella and old man Ewell when he cross-examined them.

The way that man called him [Tom Robinson] ‘boy’ all the time and sneered at him, an’ looked around at the jury everytime he answered – “ (226). This shows that Dill, as he is beginning to confront the reality of how humans can act (be it generally or as an assumption in his head), and how he will begin to start understanding how to handle the situations in a much calmer manner than tearing up at scenes like the one he watched.

To Kill a Mockingbird Archetypes. (2016, Apr 30). Retrieved from https://studymoose.com/to-kill-a-mockingbird-archetypes-essay?post 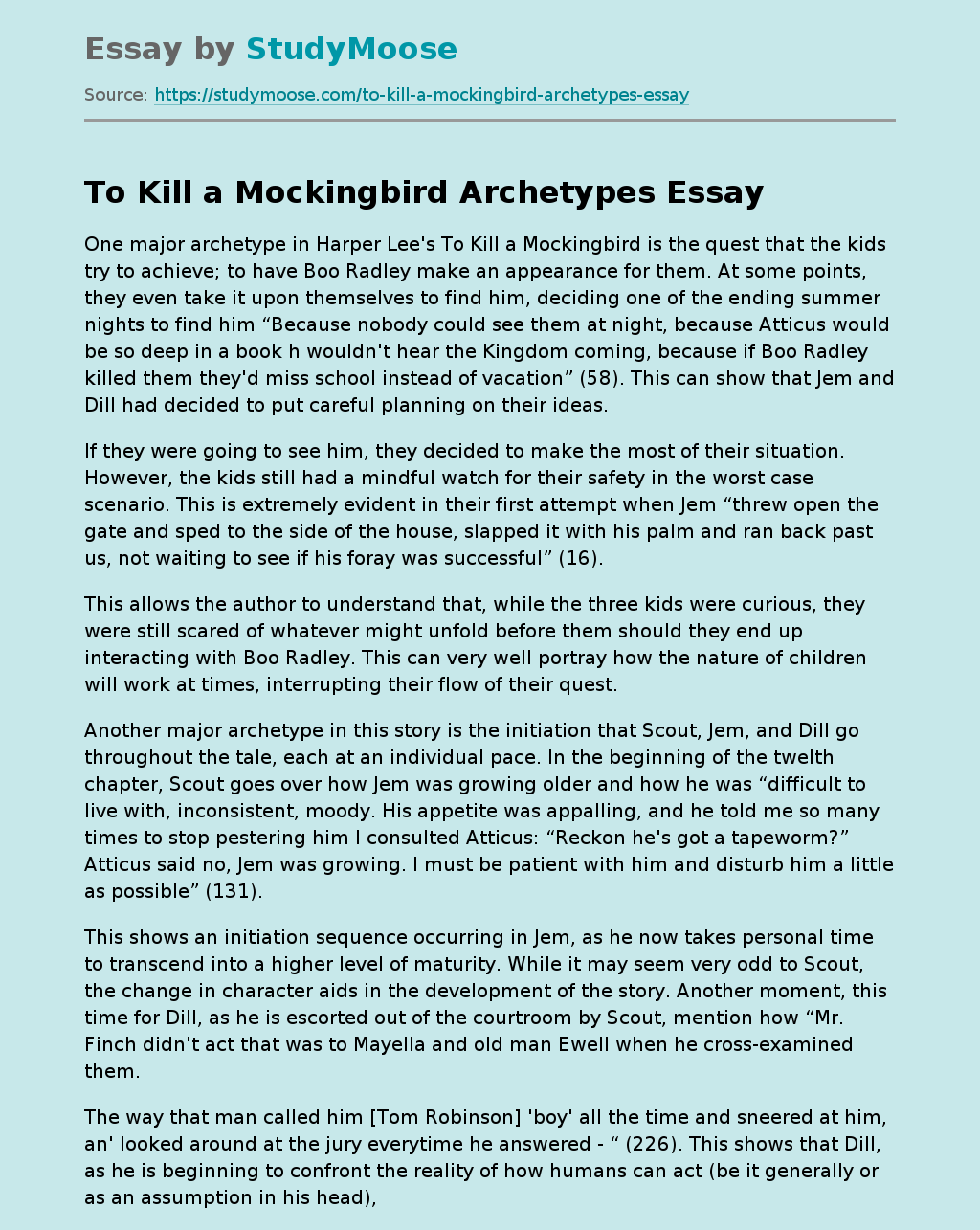