To Kill A Mockingbird: A Mirror of Life

Maycomb, Alabama during To Kill A Mockingbird is during the Great Depression and is an old town. Everything seemed to be routine as described in the book. People moved slow and took their time doing everything, so much that the day seemed longer than 24 hours. Racism occurred Blacks and Whites stuck within their race but Atticus was different. He was a lawyer that represented a black man accused of rape of a white woman. In small town everyone knows everybody and their business so it’s hard to be private.

Don't use plagiarized sources. Get your custom essay on
“ To Kill A Mockingbird: A Mirror of Life ”
Get custom paper
NEW! smart matching with writer

Either you fit in or you’re out. Kind of like the groups and cliques we have in society today.

The Coexistence of Good and Evil

The most important theme is how the book’s explores of the moral nature of human beings. The question is whether people are essentially good or essentially evil. In the beginning novel shows the innocent of the children they think that people are good because they haven’t experienced any evil.

The older they become the more their eyes open to how evil people around them can be a lot of them resulting from their father’s choice to represent Tom Robinson. From an adult perspective most of them have experienced evil and incorporates it into their understanding of the world. As Scout and Jem gets older the transition from innocence to experiencing what people and the world are really like isn’t a smooth on but their father tries to keep them grounded.

They experience threats, hatred, prejudice, and ignorance. As they grow they see how the evils of others affects innocent people like Tom Robinson and Boo Radley.

The Existence of Social Inequality

During The Great Depression social inequality plays a huge role thought the book, the separation of blacks and whites. The children are the innocent ones who do not fully see or understand what’s going on and why is it. The Finches are at the top of social hierarchy, due to Atticus and his profession but he is different from everyone and has a different outlook than most. Then there are the country the farmers like the Cunningham’s that lies below the townspeople, and the white trash Ewells rest below the Cunningham’s. Then they’re the black community in Maycomb although they are generally good people with an abundance of admirable qualities. All blacks are below even the Ewells even if they have more.

Atticus is Scouts and Jem widowed father. Atticus is a lawyer and a great father who instills and holds high standards for his two kids. He raises them on morality and justice, doing what’s right no matter what regardless of what others think or feels especially during this time. Majority of Maycomb residents are racist but he fights for equality. Scout is the voice, narrator of the story. She’s Atticus youngest, she’s intelligent and a tomboy. She loves to explore and play outside with the boys. She hates the typical girl things dolls and dresses she’s a pants type of girl.

Jem is Scots older brother who has dreams of becoming an All American Football player, although he injured his arm football is his only concern. He loves and protects his sister no matter what. Calpurnia she’s black and she’s Atticus help. She’s watch, disciplines, and looks for them because Atticus is a busy dedicated man to his work. She also teaches them about the outside and blacks world. Something like a maternal figure since their mother died. Dill the nephew of Ms. Rachel was Scots friend he was very imaginative and adventures and the idea of the fascinated him especially Boo Radley.

Conflicts I see present are segregation and the races divided between whites and blacks. This only get worse when Atticus decided to represent a black named Tom Robinson who he believes is innocent. The townspeople are stuck in their was and not only do they voice and take out their anger on Atticus but also on Jem and Scout. Atticus tells them to remain calm and do not react off words.

Reading the book if I knew nothing about it or read it before I wouldn’t assume that Scout is as young as she is. Although she’s portrayed as immature playful little girl with good intentions she speaks as an older girl.

Out of all the characters I relate to Scout the most because I was a tomboy too. I preferred pants to dresses and skirts. I was also young and thought everything and everybody loved and cared for each other but the older I grew I began to see things differently. I was raised by women my great grandma, grandma, and my two nana’s where they taught me a lot I was Jeopardy and Wheel of Fortune it was like a cartoon for me. I had Hooked on Phonic’s as soon as I learned how to talk so quite naturally I learned how to read and write before most kids my age. Grade school was very very slow and boring to me because I was always ahead. Throughout middle and high I took advanced classes for a challenge.

I don’t have anybody to personally ask so I decided to do a little research comparing the two. Most children during these times suffered poverty, deprivation, and fear. We still have poverty and other bad thing happening but children in this day an age don’t have to work about what kids did back then. Effects of the Great Depression & War in Europe were their reality, and were the topic adult conversations and that’s all heard. At the end of the 30’s and early 40’s the depression was still going on and so was the war in Europe, and to top it all off Japan declares war on America with an attack on Pearl Harbor.

Families were divided small children were left at home with older siblings while moms went to work, and dads and older brothers served the military. By 1946 the economy had improved, the war had ended, and young couples started their families with vows that their children would not suffer the childhoods that they had and their children would have more than they did. Today we are currently in war but moms, dads, and kids of age all fight in the war and homes are still the same with older siblings watching the younger ones.

To Kill A Mockingbird: A Mirror of Life. (2016, Nov 28). Retrieved from https://studymoose.com/to-kill-a-mockingbird-a-mirror-of-life-essay?post 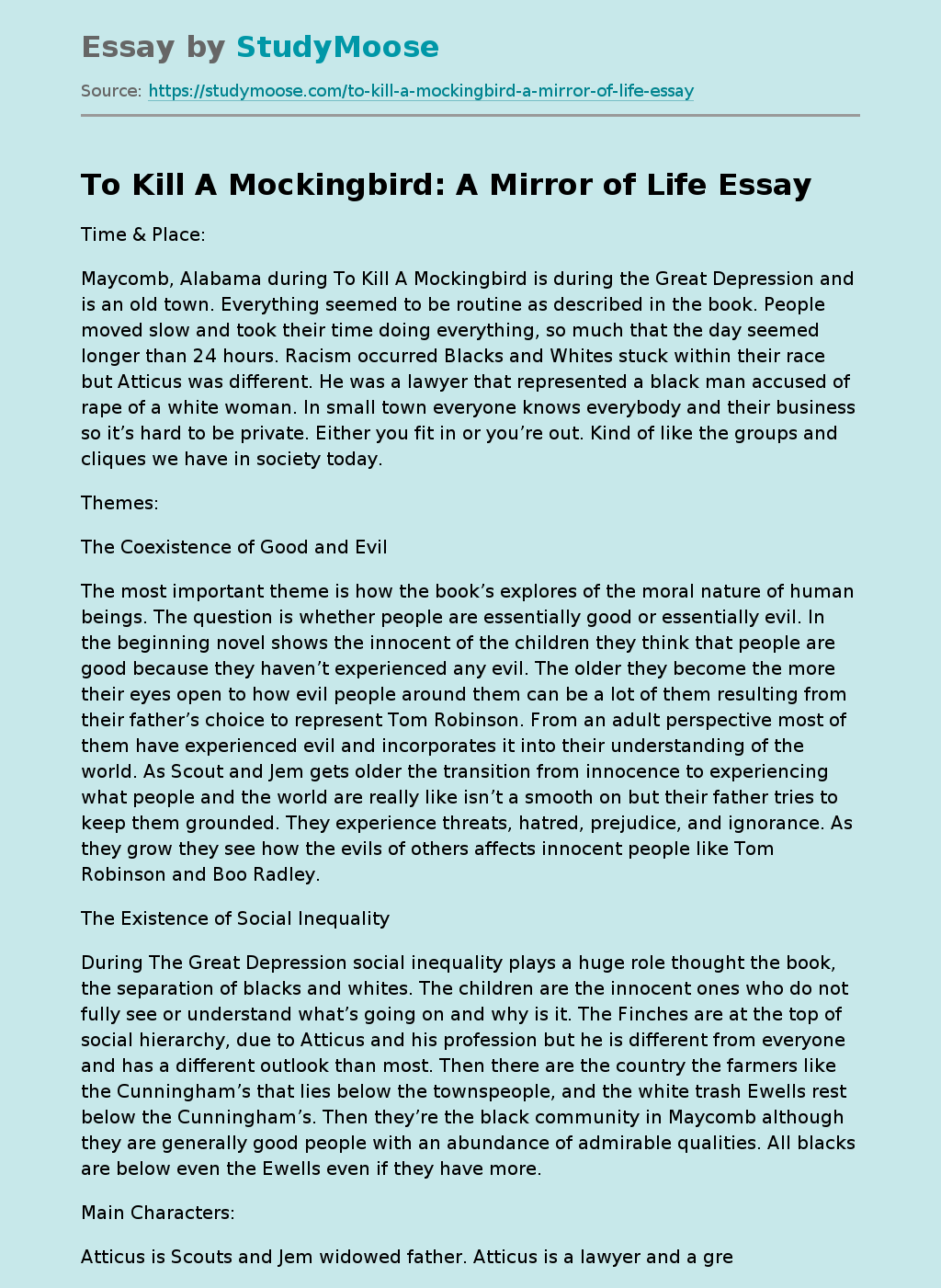