To Kill a Mocking Bird Comparison

It is interesting how two family members can share many differences and many similarities. In the novel To kill a mockingbird by Harper Lee, Atticus and Aunt Alexandra demonstrate their care and love for Jem and Scout, yet differ when it comes to parenting and views on society.

Don't use plagiarized sources. Get your custom essay on
“ To Kill a Mocking Bird Comparison ”
Get custom paper
NEW! smart matching with writer

He lifted my legs and put me under the cover… he turned out the light and went into Jems room. He would be there all night, and he would be there when Jem woked up in the morning” (Lee, 387)Although Atticus Is a busy and tired man, he shows that he cares by tucking Scout in and watching over Jem after an eventful night.

Similarly, Aunt Alexandra moves into Atticus’ house due to her concern for Scouts lack of proper etiquette. For instance, Aunt Alexandra was in the kitchen, explaining her presence to Scout “We decided that it would be best for you if you had some feminine influence. It won’t be many years, Jean Louise, before you become interested in cloths and boys.” (Lee, 170) Although Aunt Alexandra moved in with Atticus, she expresses to scout her worries and motivation to correct them. It is evident that, both Atticus and Aunt Alexandra demonstrate their love for their family in many ways throughout the book.

Atticus and Aunt Alexandra show many different parenting methods throughout the novel. Firstly, Atticus treats Jem and Scout as equals. He allows them to make their own decisions. For example, Jem and Scout wanted to hear the verdict on Tom Robinson’s case: “Tell you what, you can all come back when you’ve eaten supper… and if the jury is still out you can wait with us… Atticus opened his mouth to answer but shut it and left us.” (Lee, 277) As a result Atticus lets Jem and Scout make their own decisions by allowing them to stay later.

In addition, Aunt Alexandra and Atticus’ views on society greatly differ. For instance, Aunt Alexandra believes that certain people should be treated differently. For example Aunt Alexandra tells Atticus that she feel that Calpurnia is not doing her job efficiently, and should let her go. “And don’t try and get around it you’ve got to face it sooner or later and it might as well be tonight. We don’t need her now” (Lee, 182) for this reason, Aunt Alexandra demonstrates the she is prejudice and racist, she wants Calpurnia fired only because of the colour of her skin.

On the other hand Atticus believes that people should be treated fairly and as equals. For instance, Alexandra complains to Atticus that she feels that Calpurnia being a person of colour should be fired because she is not doing her job correctly. Atticus disagrees and says “Alexandra, Calpurnia’s not leaving this house until she wants t. you may think otherwise, but I couldn’t have got along without her all these years” (Lee,182) Thus, Atticus expresses that Calpurnia is part of the family, and deserves to be treated fairly. As a result, Alexandra and Atticus’ views on society contrast because of the way they treat people.

In the novel, To kill a mockingbird written by Harper Lee, Atticus and Aunt Alexandra show strong love for their family and yet they differ when it comes to their parenting methods and views on society. In conclusion although Alexandra and Atticus are family they are more different then the same.

To Kill a Mocking Bird Comparison. (2016, Nov 04). Retrieved from https://studymoose.com/to-kill-a-mocking-bird-comparison-essay 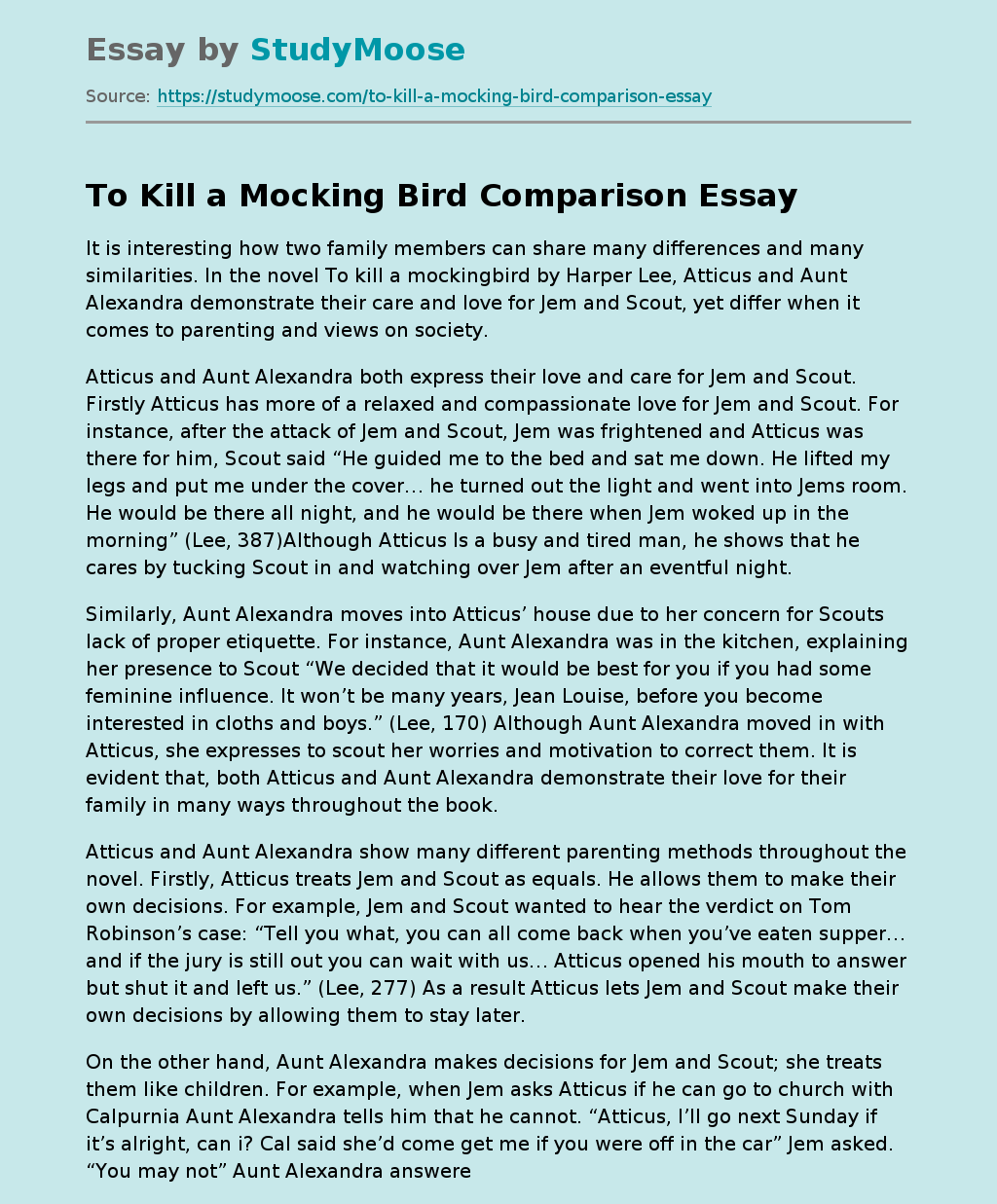