"To His Coy Mistress" vs "Our Love Now"

‘To His Coy Mistress’ by Andrew Marvell is a seventeenth century poem, whilst Martyn Lowery’s ‘Our Love Now’ is a contemporary poem. Both poets seek to allure the opposing party, using the art of persuasion. Although, contrasting the time gap in which these poems were written they both hold similarities despite differing in historical context and style. However, an eloquent point to note is that Lowery has given the woman a voice, whereas unlike Marvell, only the man is voiced leaving the reader to interpret the woman’s response to the poem.

Don't use plagiarized sources. Get your custom essay on
“ “To His Coy Mistress” vs “Our Love Now” ”
Get custom paper
NEW! smart matching with writer

‘To His Coy Mistress’ is a poem in which a man tries to persuade a woman to sleep with him. To the reader, his persuasive methods seem a blatant way to harass the woman into something she obviously does not want to do:

“My echoing song: then worms will try

This is in relation to the transience of youth and mortality. If the chance is not taken then time will win.

Marvell has instituted this phrase as a defiant gesture and I think that the poet defines sex as a sport; if the chance is taken this will if not cease time from passing, but atleast be a defection of it. Evidently the man and woman differ in wanting the same thing. Similarly this difference is portrayed through ‘Our Love Now’. Lowery presents to the reader, a ‘breach’ in the relationship. Whether or not autobiographical in content, the apparent breakdown in the relationship foresees the lack of communication between the two lovers.

We are made to venture into the idea that the man’s attitude is that things will be ‘mended’. The gap in the relationship provokes the significant ‘breach’, where the gap in dialogue, perceives a somewhat fractured liaison, as the woman is confined to respond to the analogies presented by her partner.

Observe how the wound heals in time,

How the skin slowly knits,

And once more becomes whole”

The use of the metaphor of ‘wound’ indicates to me, a gap in the relationship; there was obviously a painful experience where either both or one of the persons were hurt. This linkage relates to a wound: at first a physically hurting throb, then afterwards ‘a permanent reminder’. The woman is made to retort to his analogous metaphor. She has to counter his arguments in this way throughout the poem instead of being allowed to use her own words:

Although the wound heals,

And appears to be cured, it is not the same,

There is always a scar,

This shows her admittance that the wound heals and appears cured. But the admission is introduced through ‘although’ which to the audience introduces a dwelling condition on the healing; while the man sees the skin as whole, she sees a scar, as does the reader. This imbeds the idea of the man not accepting their relationship as terminal, as like ‘To His Coy Mistress’.

Marvell’s use of a syllogistic argument demonstrates his confidence within his own argument. The poet has introduced the philosophy of ‘carpe diem’, a Latin word meaning seize the day. In such a poem, the speaker expresses his sadness at the thought of swiftly passing time and the brevity of life. Marvell’s syllogistic argument is proposed in three sections. Firstly, he poses a thesis, he uses flattery to allure the woman to sleep with him, as time is of the essence, secondly, the antithesis is used to say that they do not have that much time and should, therefore, make the most of it; time is infinite.

And finally, the synthesis, which refers to present tense, emphasising that time should be taken; every opportunity is incarcerated. Contrasting, the poets write conventional of their era. In the case of Marvell the syllogistic, eight beats, rhyming couplets are a representation of the always-persuasive argument relating to the passage of time and the fading of earthly joys, which means it was fashionable to write in this way, and Marvell himself may not have meant a word of it, and this is in comparison to Lowery’s free verse structure. Read about highlighting gaps in provision

Differing in both language and elaborate imagery, Marvell and Lowery both define in writing conventional of their time. Marvell takes the time to praise the eyes, forehead and breasts, so he is following poetic influences, by stating:

“Thy eyes and on thy forehead gaze

A hundred to adore each breast

But thirty thousand to the rest”

His use of hyperbole is politely referring to the parts of the body he is interested in without being sinister and crude; he uses influx methods to flatter her, but does not mention them directly. This imagery is continuously portrayed throughout the poem. Marvell’s crafted argument, utilising elaborate, romantic and sexual references again comprises the time in which the poem was written. Marvell indirectly mocks the woman’s’ virginity within his writing. Supposing they had all the time in the world on their hands, the speaker imagines:

“Thou by the Indian Ganges side,

Should’st rubies find: I by the tide”

This is suggesting that his lady could even walk by the River Ganges, where she could amuse herself finding rubies. However, there is a more cynical overtone to this. It was imagined in the seventeenth century that rubies could assist in preserving virginity. Moreover, if she did choose to remain a virgin, the speaker would have to sit by the river Humber, dwelling on unrequited love. Therefore, he gives himself a fairly unromantic setting and allows his lady an exotic, beautiful one, which is meant to be a persuasive compliment. Another aspect which defines his unrequited love is the mention of the seventeenth-century perspective and having to wait until ‘the conversion of the Jews’. It was believed that the conversion of the Jews to Christianity would occur just before the end of the world. Marvell implies that that his mistress could refuse him for all of time, without damaging his love for her. These biblical references perceive the time again in which this poem was written. Marvell’s constant metaphorical references such as ‘Iron gates of life’ and ‘Times winged chariot’ succumb to the idea of demise and mortality; if them time is not taken, it will defeat all.

Neither man in the text is portrayed in a positive light; both are seeking to satisfy their own needs irrespective of the needs or desires of the women. Marvell seems to be mocking her ‘coyness’ almost implying that she is playing ‘hard to get’, this is perhaps attempting to hide her own libidinous acts. Lowery’s’ character seems to think he knows what is best for his partner and if she would just listen to him and follow his directives, then all would be well – This is rather patronising. Her reluctance is dismissed, bombarded with analogies. As, a contemporary female she is able to resist, having the final word of the poem, whichever way you read the stanzas: –

‘The tree is forever dead.

Such is our love now’

I think that the most persuasive poem is ‘Our Love Now’, and I think this because the man does genuinely seem to love the woman, whereas, Marvell’s character seems to only lust after her for just that, and there seems to be no or little love shown.

"To His Coy Mistress" vs "Our Love Now". (2020, Jun 02). Retrieved from https://studymoose.com/to-his-coy-mistress-vs-our-love-now-essay?post 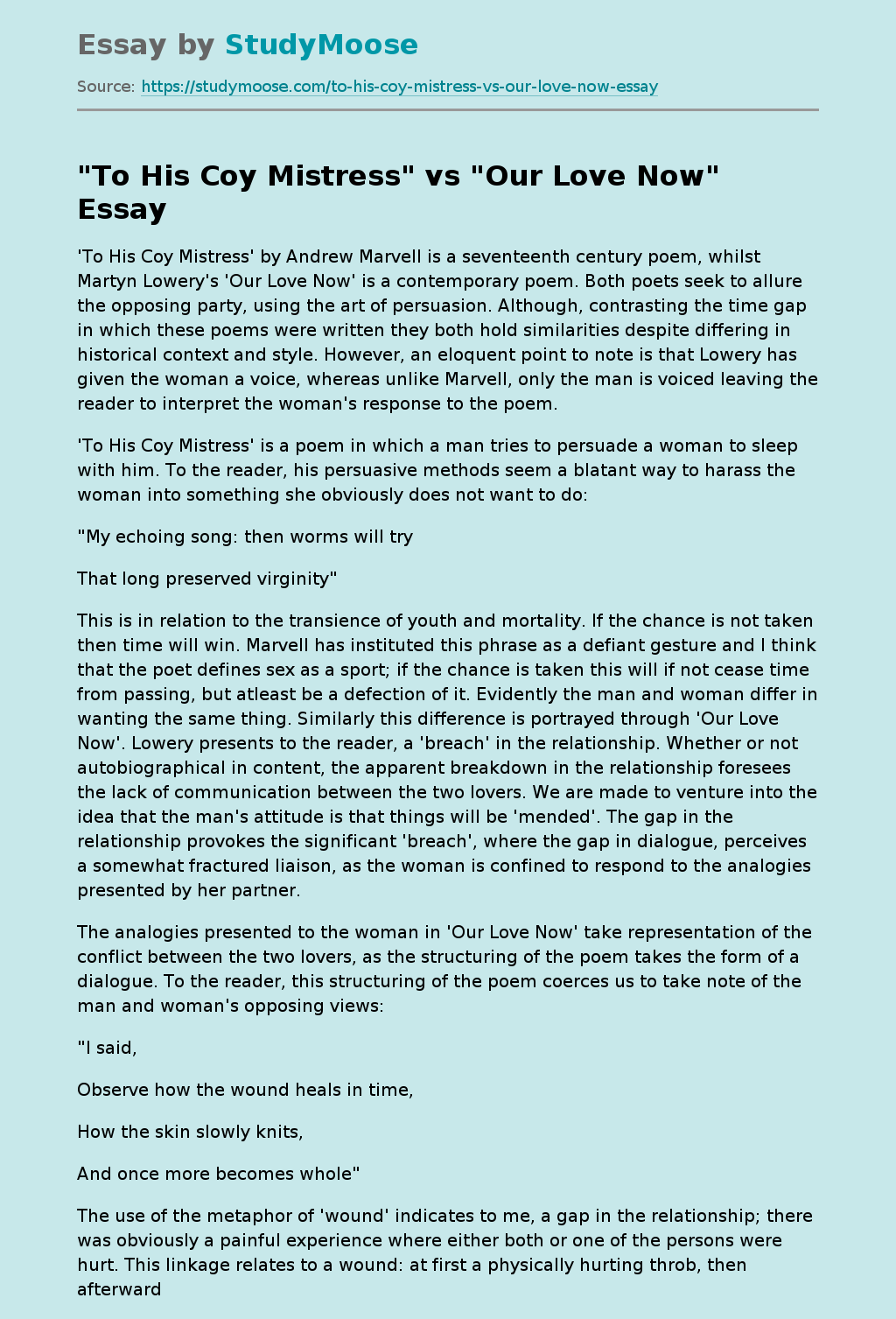