To Feed the Night

Greediness is unfortunately a very common behaviour. Humans have got used to being spoiled – too spoiled. Too many doesn’t have a realistic idea of how the world goes around. They want, and they want even more. “His wife earned eleven thousand pounds a year. He earned thirteen thousand pounds a year.” A sentence which is repeated four times in the short story “To Feed the Night” (2000) written by Philip Henser. This tells us, that their income is very important for our comprehension of the story.

Turn in your highest-quality paper
Get a qualified writer to help you with
“ To Feed the Night ”
Get high-quality paper
NEW! AI matching with writer

In the short story we meet a man and his wife. Not rich not poor, anyhow they want to show another picture of their life to the surrounding world. They’ve just moved into a spectacular apartment, a very lucky buy.

So spectacular, that they must brag to their friends about it. Just when we think their life is perfect, the man meets Mr. Bell, the estate agent. He presents a temptation, which is hard to resist.

He offers the man an even more beautiful home, than the one the man is already owner of. The man can’t renounce the temptation. Nothing was wrong with the former apartment, but it couldn’t stand up to the new place. The new apartment even had an extra bedroom. A bedroom the man and his wife had no need for. A symbol of material things in profusion. Though this doesn’t last long, the man quickly comes up with a solution, a baby. “Why not,” he said.

“It is very nice. And we could do with more space” “What for?” his wife said.

“If we had a child,” he said, “for instance. It’s very nice. It’s a real bargain” With their new apartment, they must invite their friends over. They want to show of their fake success. The success they’ve received with luckiness. But as long the picture doesn’t crack, this doesn’t come into their minds. 18 months goes buy. The house isn’t surprising them anymore, it isn’t enough. Once again the man meets Mr. Bell. This time he has an even better offer. A big and beautiful house, in a nice and rich neighbourhood. Though is wife isn’t easily convinced he tries by saying: “But it’s an amazing bargain,” he said. “And think of the investment. Don’t you want to live in a house bigger than you could possibly need?”

They buy the new fantastic house. A year goes buy. The wife doesn’t feel comfortable in the big house, they can’t afford a piano, to fill out the piano room. They don’t have nice furniture. They don’t fit in, in the extravagant house. The man wants to contact Mr. Bell once again. He wants to see what Mr. Bell has to offer. Though they live in the biggest and most beautiful house, maybe Mr. Bell had something better to offer, like all the other times. Mr. Bill has an extraordinary house. The problem is, that there is another buyer who is very interested. It causes a lot of problems, and at one point they can’t afford to make a new offer. The man doesn’t know what to do, but then Mr. Bill tells him that the other buyer will be alone in the house that afternoon. The man went to the house, with a killers weapon in his pocket.

Out of a sudden all of his greediness comes back around. The other buyer shoots the man. This is a symbol of the material greediness getting out of hand. The man wasn’t able to think logical, and only having the things he needed, he wanted more. At the end, alt of this gets back to him. With the dead of her husband, the wife doesn’t return to their united house, but to her parents’ house. This is a symbol of her being tired of the greediness, and she now wants to get all the way down to earth by living at her child home. “And the urn was nine inches high. And the box was twelve inches by six inches by eight inches. And the drawer was three feet wide and two feet deep, and the wife shut it. And for him that was space enough.” A beautiful symbol of the same man, who had lived in the biggest houses, now lives in a small urn, in a small drawer – because he has no need for more. 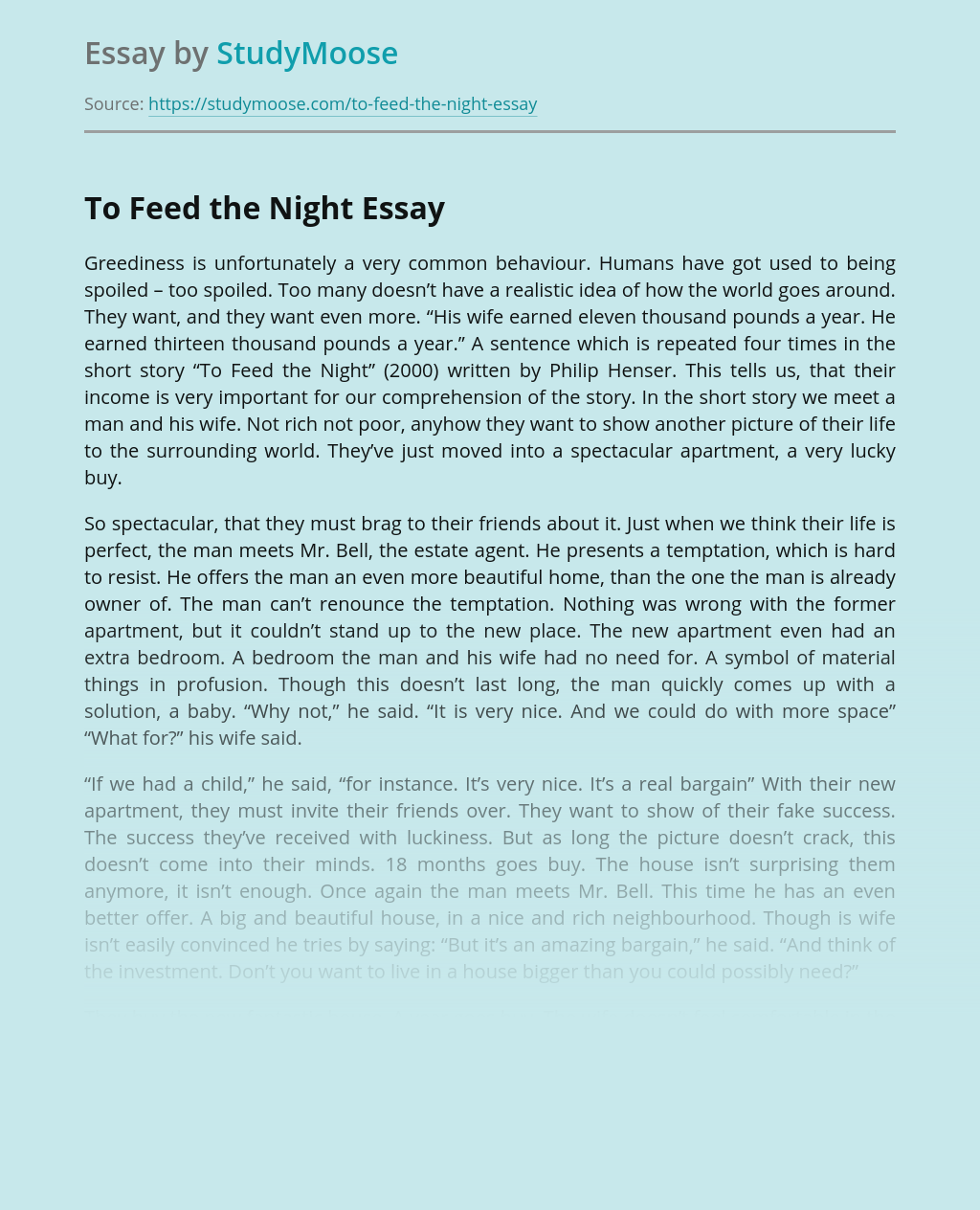 Turn in your highest-quality paper
Get a qualified writer to help you with
“ To Feed the Night ”
Get high-quality paper
Helping students since 2015
Stay Safe, Stay Original