The Titanic was known as “the unsinkable ship”. She was the largest ship afloat at the time of her maiden voyage in April of 1912, during which she collided with an iceberg. She was the second of three Olympic class ocean liners operated by the White Star Line. A numerous amount of people believe that the collision that occurred on April 15, 1912 was The Titanic’s sister ship The Olympic, and that the wreckage was premeditated and was used to commit insurance fraud.

Don't use plagiarized sources. Get your custom essay on
“ Titanic The Unsinkable Ship ”
Get custom paper
NEW! smart matching with writer

White Star Line felt a great pressure to compete with the Cunard Line, as they had just put out two amazing ships Lusitania and Mauretania.

At this time White Star line produced the Olympic class liners, which consisted of the Olympic, Titanic, and the Britannic. The Olympic was the first ocean liner to be completed and to set sail. One day, when the Olympic was in the Bramble Bank, a warship took a wrong turn and collided with the Olympic.

This caused severe damage to both ships, and left the Olympic in a state of uselessness. The Royal Navy completed a full investigation were they found their warship free from any responsibility of the collision. White Star line was afforded no money and had to pay for all the damages themselves.

White Star Line was in a great need of money. The number one way that Marine fraud is committed is to swop ship names. It is actually quite simple, frequently done and can be very profitable. This is exactly what White Star Line needed, a quick and easy fix. After the collision the Olympic went into seever repair.

White Star Line never elaborated on how extensive the damage exactly was. In 1912 while the Olympic was under repair it started to transform and increasingly looking like the Titanic. The Titanic had a very distinctive arrangement of five port holes. This is something the Olympic ship did not embody on its maiden voyage, but in the winter of 1911 it suddenly had this distinctive pattern. These two “sister becoming twins” By the spring of 1912 they were nearly mirror images. If such a switch was to occur it would’ve happened in March at a dry dock in Belfast.

The Olympic went in for a very minor repair of the propeller which should have taken all of two days but lasted a whole week. The Titanic went for its sea trials which is normally consist of two days and the ship sailing at full speed. The Titanic’s sea trials consisted of one short day and the whole ship was not inspected. They neglected to go down to the storage rooms where they would have seen the state of the furnaces. An ample amount of people opted out from the maiden voyage of the Titanic, an experience that many people were yearning for.

Only one crew member signed back on with White Star Line after constructing the ship, which is very strange considering there was a huge shortage of jobs at the time due to a coal strike. Even ship owner Jp Morgan opted out to take part in Titanic’s maiden voyage, after promising to attend, he claims due to health reasonings but a few days later being seen in perfect health. The Californian was another ship owned by White Star Line that was put out of work due to the coal shortage in Britain. She is also the ship that rescued the survivors from the tragedy of the Titanic.

The only reason they were not in sight of each other was due to the sudden jerk the Titanic made in efforts to avoid the iceberg. At 11:40 pm the Titanic hit the iceberg leaving a 350 ft gash. It’s first S. O. S did not go till 35 minutes till after the clash, that’s ? of the time that it took for the boat sink. The first lifeboat was not set out till an hour and 25 minutes after the clash, and when filling these lifeboats it was not to captivity and there was only half as many life boats as there was people on the boat.

Why would you take so long to send out your S. O. S call? Why would you take so long to fill up your lifeboats and why only fill them halfway? When the surviving crew workers got to Plymouth they were detained for 24 hours. While being detained they met with someone very high up in White Star Line. It is believed that this man told they to never speak of the events that went on the night of the sinking of the Titanic. White Star Line received $160 million for the sinking of the Titanic. This being the biggest insurance fraud to ever be successfully committed. Marine fraud is so simple its brilliant. 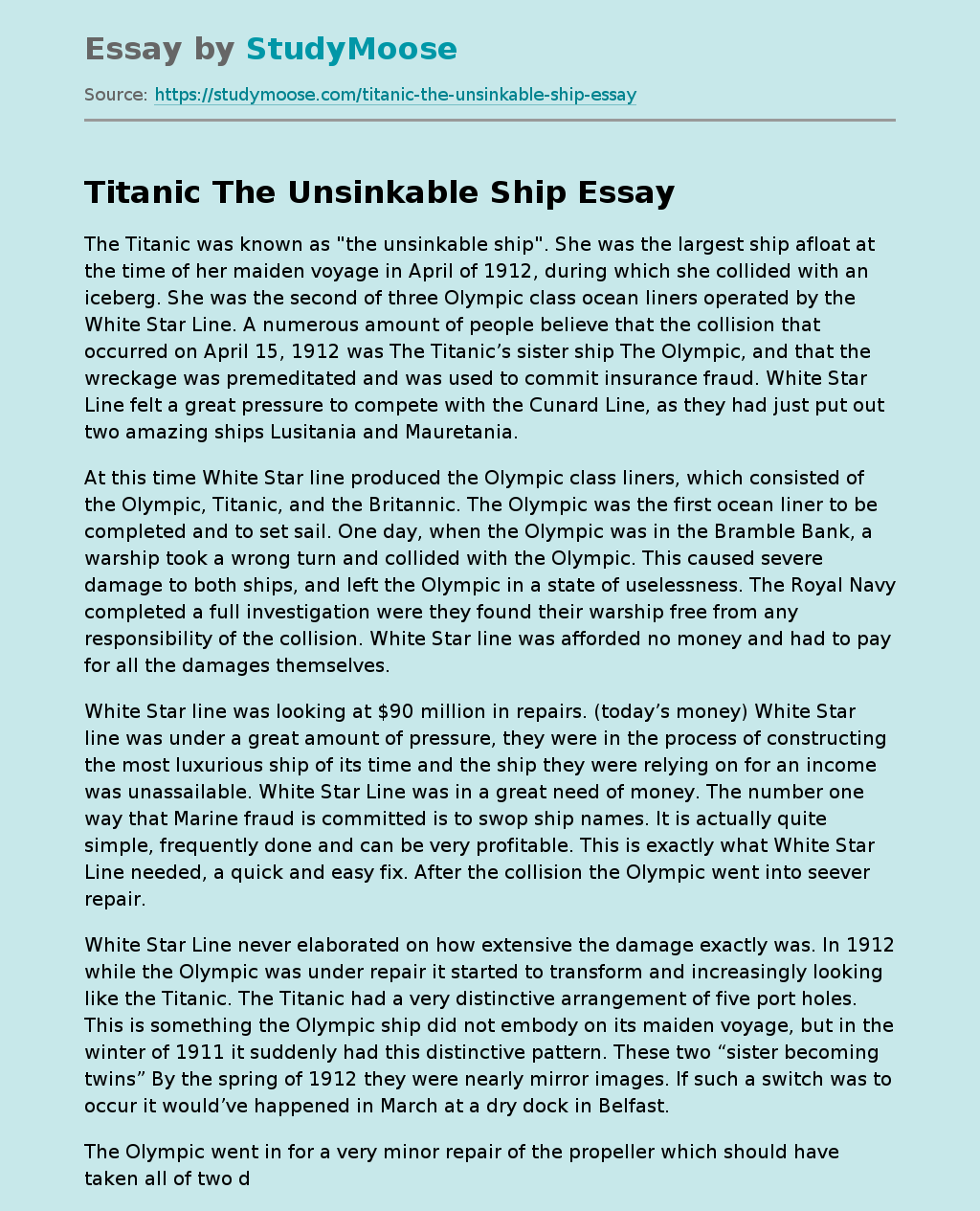