Attention Getting Device – In 1898 a book called _The Wreck of the Titan_, written by an American writer by the name of Morgan Robertson. This book just so happened to be about an “unsinkable” ship with many rich passengers traveling to New York. This ship hit an iceberg while out on its voyage and sun, leaving many fatalities due to lack of lifeboats. This book was written 14 years before the Titanic perished.

Preview – The Titanic is one of the most memorable disasters in history, the sinking ship even inspired the classic #1 movie.

Don't use plagiarized sources. Get your custom essay on
“ Titanic: Informative Speech ”
Get custom paper
NEW! smart matching with writer

First, I will discuss all about the titanic itself.

Second, I will talk about the ship sinking.

Third and finally, I will discuss a bit about the movie made in its honor.

The Titanic was the largest existing ship at its time and the biggest movable object built yet.

Geoff Tibbals reported, in his 1997 book _The Titanic. The extraordinary story of the “unsinkable” ship,_ the Titanic was 882 feet long and weighed 46,000 tons.

Titanic held around 2345 passengers and 860 crew-members.

The Titanic was furnished with only the finest items to make the upper class feel as though they were in an even finer hotel than those that were on land.

The first class dining room was the largest on any ship and could seat up to 500 passengers.

Titanic was believed to be the safest ship at sea.

The bottom was designed with 16 watertight compartments paired with automatic water tight doors.

If water would enter the doors would automatically shut, with these safety features and other the Titanic was deemed unsinkable.

The beginning of the Titanic’s first trip out to sea went off without a hitch.

Tibbals stated that the ship departed from Queenstown in Ireland at 1:30 pm on April 10th , 1912, heading for New York.

The Weather seemed perfect for sailing and the Titanic looked destined for success.

Suddenly blue skies turned to gray when the unsinkable Titanic struck an iceberg.

The iceberg was hard to see fully at a distance because most of the ice was submerged under the dark blue water and it punctured the side of the ship.

Distress signals were sent out yet never received because there were no surrounding ships.

As the ship was sinking people were in disbelief and as a few were rescued most had no place to go.

There were only about 20 life boats providing only enough for about half of the people on board (2200).

Fist on the life boats were woman and children, then first class, and finally lower class.

On Monday the ship broke in half then submerged completely, about 1,522 lives were lost .

Titanic the movie was a fictional spin on this historic story, by James Cameron.

Marsh said in _James Cameron’s Titanic_ from 1997, Cameron was determined to bring the event of Titanic to life.

He conducted 6 months of research to produce the most realistic and detailed timeline of his story to match the real event.

Overall Cameron spent more time down on the ship than the actual passengers even had the chance to, he made 12 trips lasting from 10-12 hours.

The movie was a masterpiece, extreme success and now a classic.

Titanic the movie was nominated for a record 8 Golden Globe Awards only a few weeks after its release, it won four, not to mention its numerous other awards.

It made approximately 1.8 billion dollars world-wide, and was also the #1 movie of all time and even now is still up there.

Summary – Today I have discussed:

The Titanic is one of the most memorable disasters in history; the sinking ship even inspired the classic #1 movie.

In conclusion, The loss of lives on the Titanic was astonishing, it is something in our history that should always be remembered, whether through similar stories or through classic motion pictures. 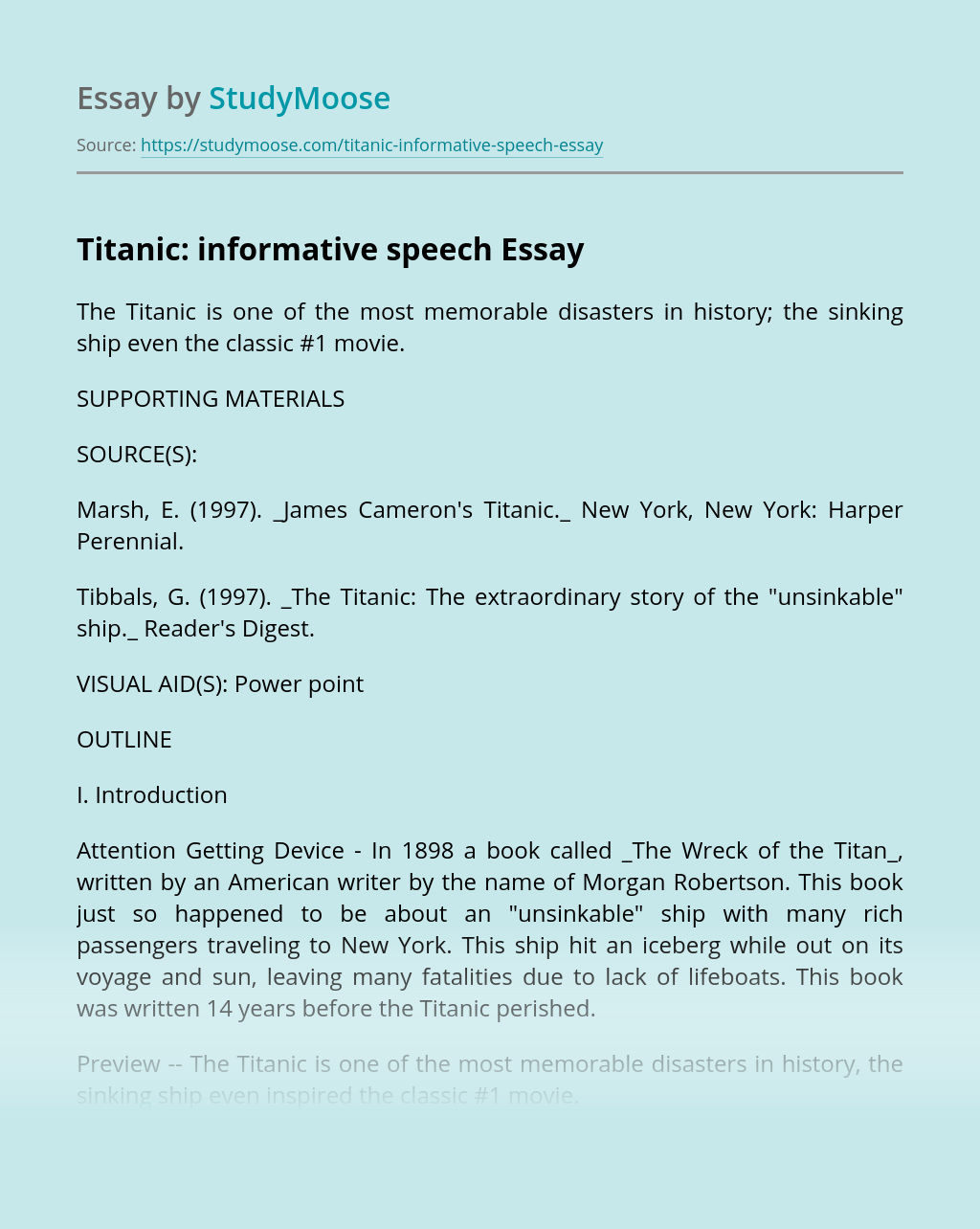