According the University Health Service (2018) Speaking anxiety, Glossophobia, or public speaking anxiety (PSA) is the fear of performing or simply talking in public. The individual might experience severe nausea, excessive sweating, or feelings of panic attacks. The thought of speaking or simply communicating in public results of intense anxiety and thus avoidance of events or presentations in the case of students.

Based on some personal observation taken by the researcher, among the people of Bahraini society or more specifically the students at University of Bahrain, a wide range of students had been noticed to be sharing some traits of speaking anxiety and or more severe fear of PSA.

Don't use plagiarized sources. Get your custom essay on
“ Tips for Managing Public Speaking Anxiety ”
Get custom paper
NEW! smart matching with writer

Speaking activities held in the classrooms can be a nightmare to a student who face speaking anxiety. It results with losing marks for trying to avoid any oral activities or having intense panic attacks and anxiety distress for attempting to speak. Moreover, the thought of presenting or talking might be sometimes more terrifying than presenting itself.

What goes inside the mind of that individual is extreme over thoughts of numerous ideas about failing, mumbling, saying the wrong words, or simply standing in front of so many strangers.

Burnley and Spanos (1993) state that more than 80% of the population experience some anxious difficulties and emotions when speaking in public. Therefore, the aim of this investigation is to look closely at the students who face this distress every time they have to present and to answer several questions to understand and hopefully find solutions to face their fear.

There are several studies that are based on Bahraini student’s perception when it comes of anxiety and oral communication at the university. The procedures taken to support the research is by distributing both online and offline questionnaires. However, the questionnaire papers might take a longer time to process and get approved for them must undergo through the facility first to sign and confirm it. In addition, the study might include the observational and note-taking methods by attending other classes at the university also after gaining permission and approval. the last method used is interviewing students at the university about speaking anxiety and whether they face the problem or had issues with a partner facing PSA.

Moreover, the significance of this research is to measure the level of anxiety students at the university of Bahrain might have. It delves into the reasoning behind this anxious feelings and whether such anxiety can be solved.

The goal that the research wants to answer are the following questions:

Since this study focuses on students anxiety of speaking or presenting in general. The study faced several issues. These issues mostly revolved around not having enough articles about students facing speaking anxiety in general and the lack of references about the topic.

In this section, different studies about self awareness when presenting, speaking Anxiety, and the audience affects on the speaker are discussed and analyzed in addition to previous research results.

The term Anxiety as defined by Oxford Dictionary (2018) is ‘A feeling of worry, nervousness, or unease about something with an uncertain outcome ’.

According to the Canadian Mental Health Association, a generalized anxiety disorder can be defined as ‘A high level of stress and an uneasiness about daily life such as health, family and friends, work, and finance can be associated with those having a generalized anxiety disorder’. Anxiety takes many aspects and forms, and public speaking anxiety which goes under the social anxiety category is one form of the many aspects of anxiety a person can experience. McCroskey (1977) argued that public speaking anxiety can cause fear and uneasiness for those who have to perform or speak to people. This might be considered one of the many causes an anxious speaker experience. Also, Ayres (1986) argues that the more an individual thinks about his or her performance the more the anxiety level rises the fear of not meeting he audiences expectations tend to be one of the biggest reasons for public anxiety.. “Anxious speakers can show cognitive, affective, and behavioral reactions. These might include increased distraction, decreased information processing abilities, feelings of fear and uneasiness, increases in sympathetic nervous system arousal, and attempts to escape the situation’’ (Schwarzer, 1986,p.1-17 ). The lack of grasping information, processing information, feelings of fear and uneasiness are what an anxious speaker might go through during a presentation, or simply having to talk in public.

Audience and Their Affects on Anxious Speakers

As discussed above, anxious speakers deal with many mental thoughts before, during, and after having to present or talk in public. The most important factor an anxious speaker might worry about is audience and how to please them. ‘the speaker might greatly relies on the audience and the speaking environment during giving a presentation or speech’( Daly, Vangelisti & Lawrence,1988,p.903-913). Whether the individual deals with anxiety or not, their attention will rest in a position they are most likely comfortable with. However, those who are highly anxious are usually more self aware of themselves and people around them. Beatty (1988) stated that public anxious speakers have strong sense of being apparent and conspicuous during speeches and presentations.

The connection between audience and speaker are positively interrelated. The speaker might be the center of attention to the audience but the audience are surely the center of attention to the speaker. The level of pleasantness the audience have, determine the speakers anxiety level. In addition, the more familiar the speaker is with the audience the more comfortable he/she will be. McCroskey (1984) argued that speakers believe that the performing experience might be more tolerable or comfortable with a familiar audience. An anxious speaker is more comfortable performing or talking publicly to a group of friends, for they know that individuals character and would be more understanding to their speaking problems. ‘An audience of friends that is tolerant, understanding, and predisposed toward favorable evaluation of the speaker would be as pleasant a speaking context as one could envision’( MacIntyre&Thivierge,1995, p.457).

Aspects and Results of Audiences Affects

MacIntyre and Thivierge (1995) have created a study illustrating how audience can affect the speakers level of anxiety by looking closely at two aspects: Are anxious speakers more comfortable with familiar audience or strangers? and does the pleasantness of the audience differ based on their familiarity or not. The investigation also focused on three speaking contexts: academic, professional, and social contexts.

MacIntyre and Thivierge (1995) concluded this investigation by arguing that the pleasantness of audience has a strong role in affecting an anxious speaker. Speakers anticipated less anxiety when speaking to pleasant strangers than to unpleasant friends and also were willing to speak more with pleasant strangers than to unpleasant friends. It is argued that speakers would rather perform to strangers rather than friends when it comes to embarrassing activity. (Brown, Garland,1977; Froming, Corley, & Rinker, 1990). It is suggested that friends might tease or mock the speaker after the performance resulting to a greater anxiety for the speaker during and after their performance (MacIntyre, Thivierge, 1995).

All things considered, speakers might face some factors that help either increase or decrease their anxiety based on the audience. However, the general theory and results demonstrate that speakers, in general, are more comfortable with the familiar pleasant audience more than pleasant strangers.

Self Awareness in Speaking Anxiety

Speakers who deal with anxiety are most likely to be more self aware of themselves or of the environment around them. Anxious speakers will overthink about their appearance, pronunciation, figure, during the whole presentation or performance.

Daly and Vangelisti and Lawrence (1988), presented a research about speakers self awareness during a performance. They suggest that the speakers attention may vary to either themselves, to the audience or the combination of both. Just like Duval and Wicklund (1972) suspected, public speaking anxiety gave a sense of awareness during speeches thus, making anxious speakers focus more on themselves. Similarly, highly focusing on one’s self, anxious speakers tend to have more negative thoughts about their performance and results. (Sarason, 1975).

In the next section, a discussion about the methods taken to study the anxiety level of students are discussed. 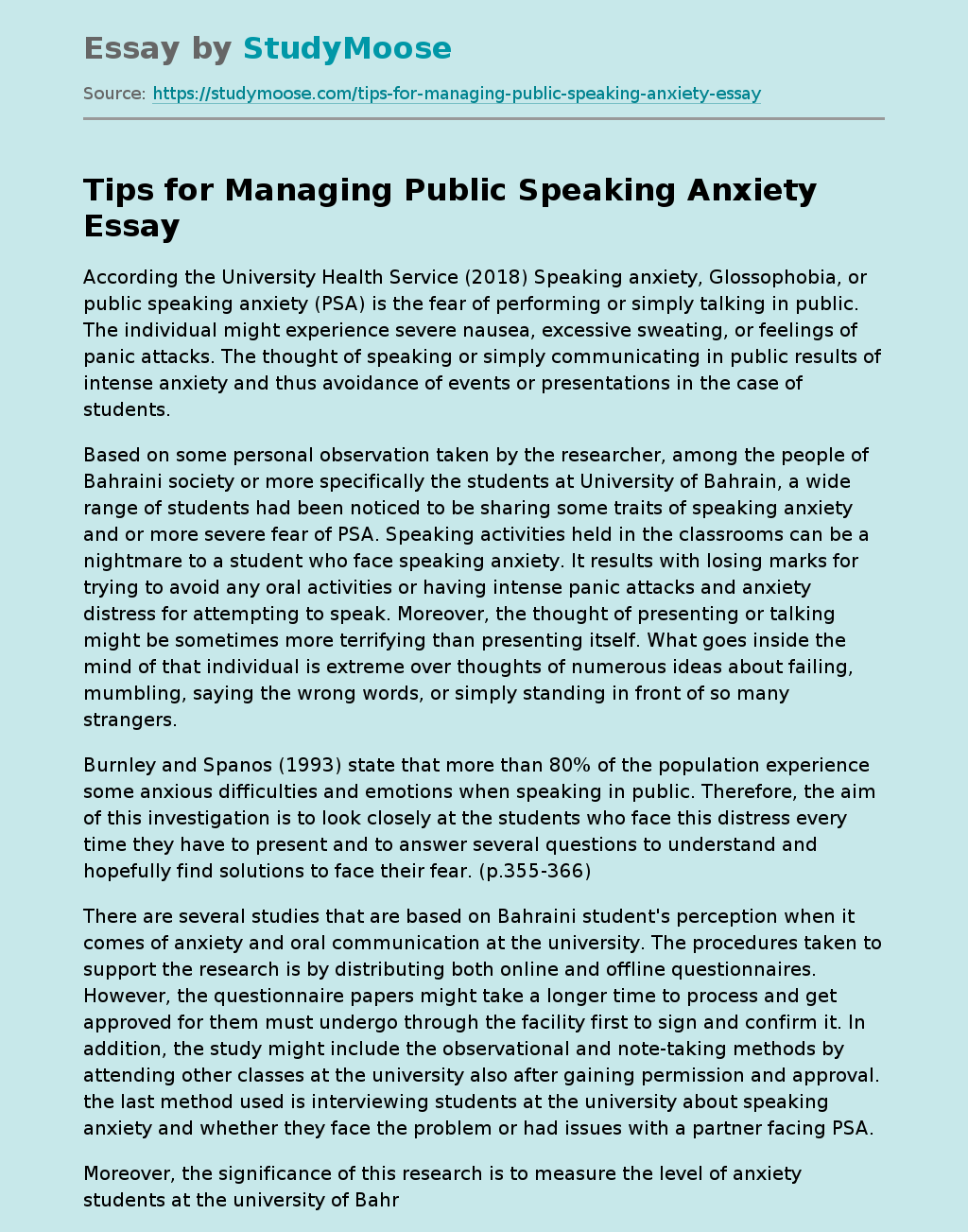