Through the Tunnel by Doris Lessing

1. The inner journey that the boy takes on his self-imposed physical rite of passage is his transition from childhood and emerging into young manhood. This transition is mostly symbolised in this short story by the Jerry’s experience of preparing to go through the tunnel after watching the other boys swim through the tunnel. Jerry practised holding his breath in order to get over the first barrier in achieving his desired destination, the light at the end of the tunnel which symbolises the beginning of his young manhood.

Don't use plagiarized sources. Get your custom essay on
“ Through the Tunnel by Doris Lessing ”
Get custom paper
NEW! smart matching with writer

This inner journey of growing up is also represented through the physical aspects of the journey when he went from staying with his mother on the safe beach to the dangerous, risky and rocky bay with the French boys. This maturing is also represented when he wanted to give up on his quest after suffering numerous nosebleeds and his fear of death in the tunnel. However he decides to complete the quest anyway based on impulse and by pushing through, he has found self confidence and maturity which is seen by his wanting to be independent of his mother.

2. Lessing conveys the elements of the inner journey that Jerry grows through by using extensive symbolism and metaphors in the story. This third person narration provides an omniscient view on the main theme in the story- the coming of age in Jerry. Her use of third person narration allows her to explore the characters stream of consciousness such as, “She was thinking, Of course he’s old enough to be safe without me.

Have I been keeping him too close? He mustn’t feel he ought to be with me. I must be careful”. This sort of narration allows Lessing to give detailed descriptions of the surroundings such as the different colours on the beach and uses the colours to show the transition in Jerry from innocence to taking risks such as when Jerry is approaching the bay, where the rocks where just “red –brown” before becoming “rough, sharp”.

The metaphors and symbolism is also visible when Jerry is swimming through the tunnel, there was a period of darkness before emerging in the light from the crack in the tunnel, symbolising the turmoil inside the child of wanting to be independent before emerging into young adulthood. The native boys also prove to be a strong motif in the story as Jerry used to look up to these boys and wanted to do what they did. “They were big boys- men, to Jerry”, quotes how Jerry yearned to be like them, men. He sees swimming though the tunnel as a rite of passage. However after being able to achieve what the boys had done, Jerry wanted nothing to do with them as he had symbolically emerged into adulthood, “He could see the local boys diving and playing half a mile away. He did not want them.”

Through the Tunnel by Doris Lessing. (2017, Jan 07). Retrieved from https://studymoose.com/through-the-tunnel-by-doris-lessing-2-essay 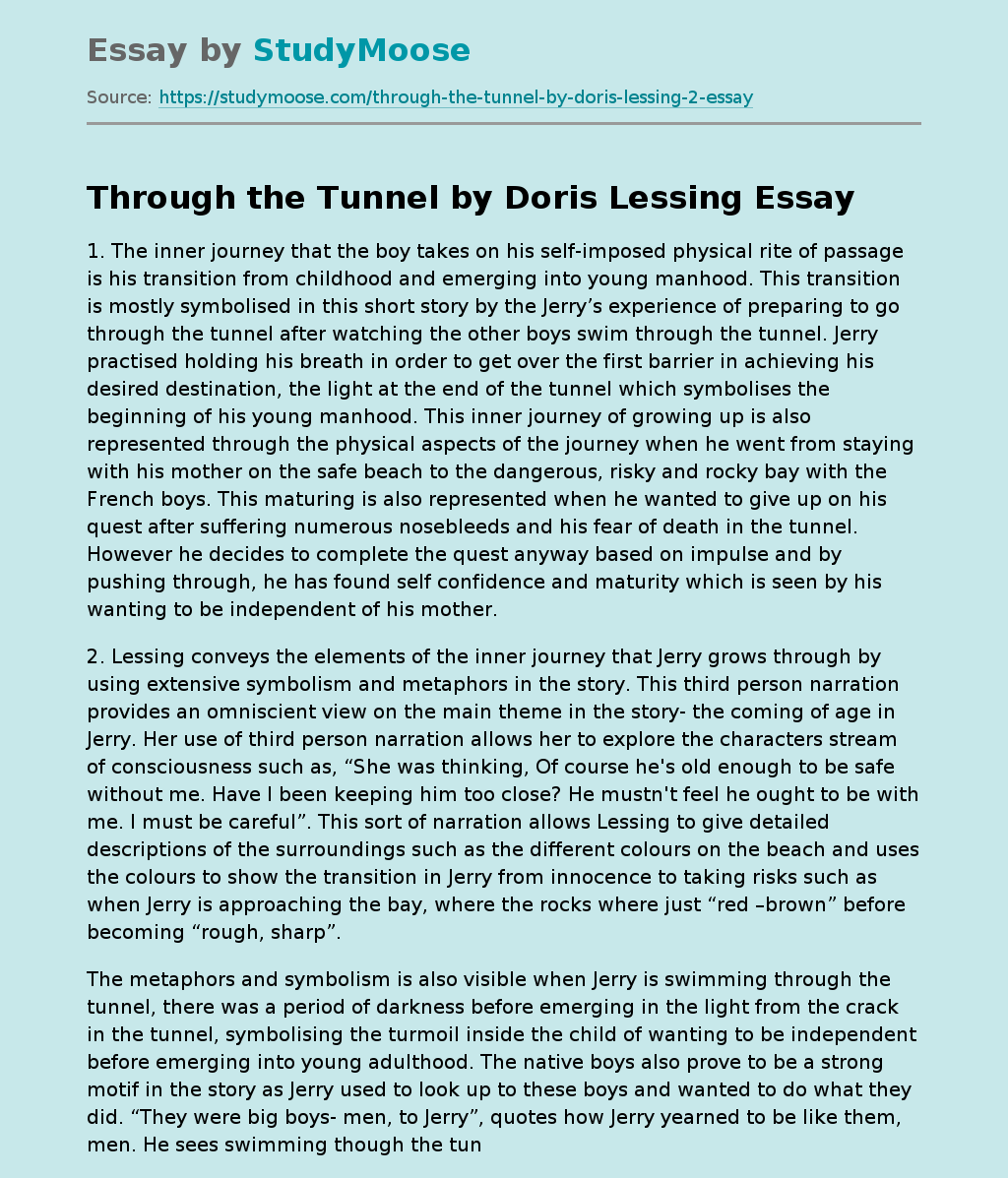