The chapter starts off as Elijah and Xavier are being sent to another great Allied offensive in the city of Amiens. Xavier makes the statement that the battle for food has become as constant as the war against each other and that for most people the war itself is the real enemy. The Canadian army has advanced a great distance and it appears that it will not be long until the war is over. As Xavier and Elijah are raiding the trenches of the German lines Elijah disappears in pursuit of the retreating Germans, which causes Xavier to worry that Elijah’s lust to kill might have driven him too far this time.

After Elijah’s return he is lectured by Colquhoun (the man who replaces McCaan) about Elijah’s absence, he remains silent as he realises any further comments will only make matters worse.

It is shown that Colquhoun and Lieutenant Breech are jealous of Elijah’s medals and achievements.

Proficient in: The Fault in Our Stars

After this Elijah searches for Xavier to tell him the things he had done when was gone, he describes to Xavier how he followed the Germans and began to kill them one by one until he ran out of bullets. Elijah claims that it was too easy and that it lost the thrill it once gave him. While Elijah is returning to his section after his killing spree he stops in one of the other Canadian division’s in-order to obtain more morphine, in his attempt to steal the medicine he notices an injured man in the medic’s tent asking for morphine.

Elijah inserts so much medicine into the man that he sees the life leave him.

Xavier is unpleased with this story so that he walks away from Elijah. Later on, Xavier and Elijah report to Lieutenant Breech and see Grey Eyes who appears to have been gone for a few weeks. Elijah is being accused of being an addict to morphine and to scalping the heads of his kills. Elijah is outraged to the limit where it begins to frighten Lieutenant Breech, and as he pulls his revolver out and points it at Grey Eyes a bombardment sends them all flying in the air. Elijah soon awakes from un-consciousness and kills both Grey Eyes and Lieutenant Breech. The chapter ends with Elijah explaining to Xavier how soon the war will be over and they will return home together as heroes, however, Xavier’s response is that they can’t and that Niska is dead.

In the chapter “Murder”, the main character is Elijah. The chapter is mainly describing his actions, and the choices he is making. In this chapter there are also hints of Xavier’s feelings, and a bit of an explanation to his sadness, which is Niska’s apparent death. We’re also learning more about Elijah’s past and the connection he has grown with Niska, to make Elijah into more of an individual by being taught how to hunt. However, it’s safe to say that Elijah is definitely descending into madness even further from his act of killing Breech and Grey Eyes, especially in such a gruesome technique. Elijah is gaining strength and relieving the pain off his mind by killing his problems away, and he’s even doing this in the careless way of not even following orders and being his own leader. “Elijah says he’s concerned that they will stop fighting sooner than he wants them to, and he’s anxious to see more action.” (333)

This quote was said by Xavier, and it’s indicating how Elijah is fueled by the deaths of people and has a desire for it. He feeds off the idea of taking others’ lives to grow him more and more. These are definite signs of the Windigo. In addition, Elijah is being possessed by his morphine addiction, and he is losing himself. “I know I’ve done horrible things here, I know you think I have gone mad. Sometimes I feel like I was mad too. But I feel like I must leave this place, that I am ready. We will go back home and you and I will return as heroes.” (343) This quote was said by Elijah during a conversation with Xavier by the campfire. Maybe Elijah still has some sanity in him, seeing as he wants to leave the chaos of war too. He is a very interesting character, and is definitely an enigma of this book. It’s a bit ironic because you would think Elijah is scared of war, but now he has become more scared of going back to his old life.

The theme that this chapter would most accurately relate to would be “the Descent into Madness.” Elijah is undergoing a phase where he is losing his humanity with each kill he consumes. Elijah seizes to see himself as merely human and gives himself super human characteristics this becomes clear when he claims “he walks with one foot in this world, one firmly planted in the other world.” Furthermore, Elijah fully descends into madness as he betrays his own people by murdering Breech and Grey Eyes. At one point Elijah acknowledges what is becoming of him and tries to fight it however, Xavier knows there is no going back from the evil and atrocities Elijah has committed.

The stage of the Hero’s Journey which relates to this chapter is the tests Elijah and Xavier must face which result in Elijah’s descent into the abyss. After Elijah’s murders he tries to justify his actions to Xavier at which point Xavier makes a statement about Elijah’s moccasins saying, “There’s no fixing those” (343). What do you think Xavier actually means when he says this? He means that much like Elijah’s moccasins he has gone too far past the point of being able to return to what he once was. Elijah has reached the point of pure evil thus, he has become a windigo. 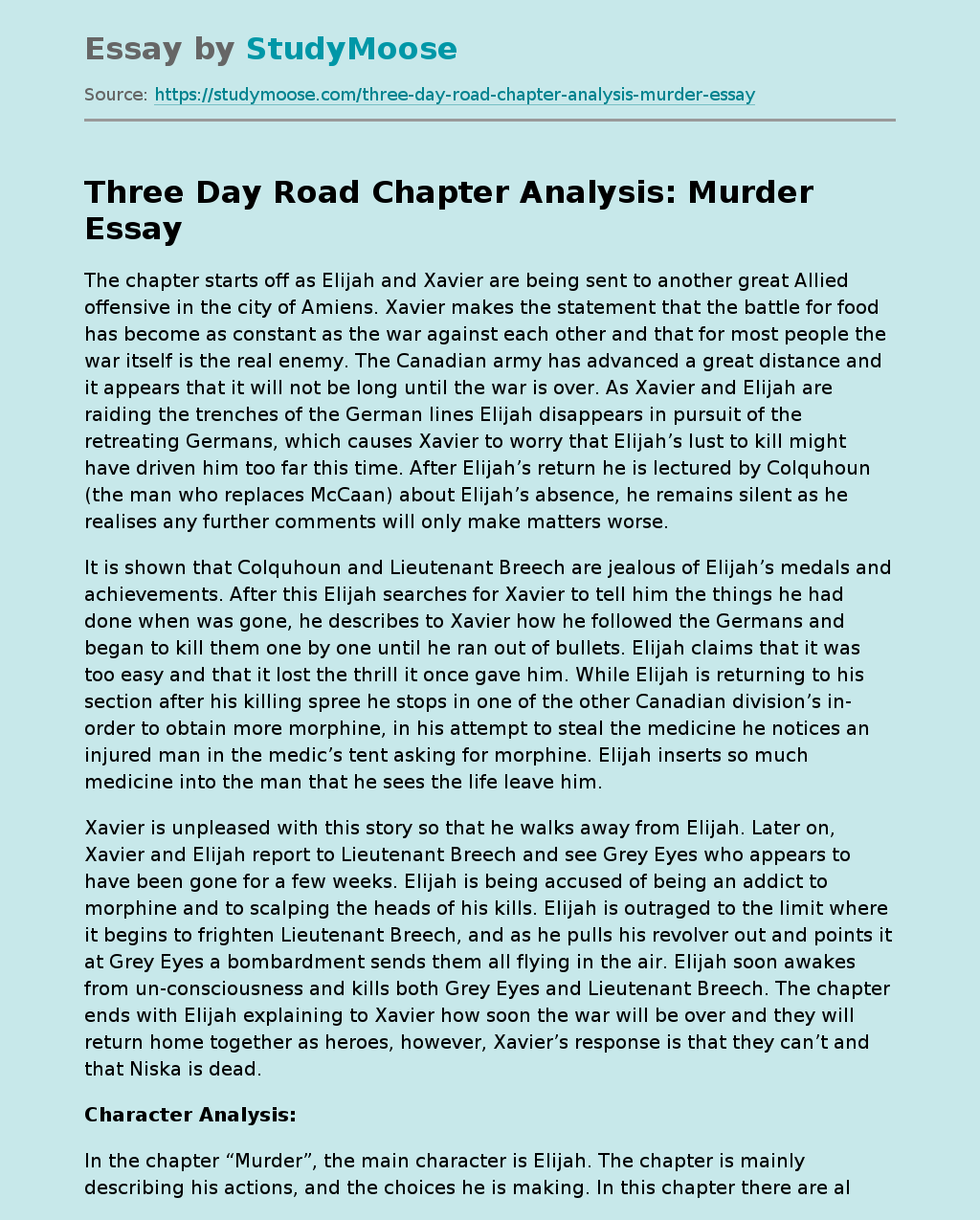